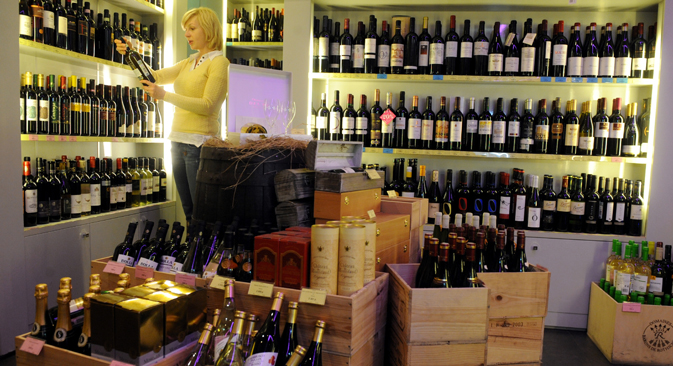 Russia accounts for only 0.6 percent of U.S. wine exports, and there are substantial obstacles to increasing that number. Source: ITAR-TASS

Interest in wine culture is increasing among the Russian middle class, but mid-range U.S. wines face particular challenges getting access to the market.

When American wines returned to Russia in the early 1990s, the best sellers were cheap, sweet wines that were similar in taste to well-known Soviet brands.

Today this type of mass-market wine continues to dominate, but industry experts believe there is potential for mid-market American wines that stand out from the crowd without breaking the bank.

With import duties as high as 18 percent as well as many other taxes and margins, Russian wine drinkers are used to paying at least double for any bottle of wine purchased locally compared to the same bottle bought in Europe.

The Russian wine market remains very fragmented, and consumers are either looking for a bargain at the low end or buying wines at $200–300 per bottle.

Cheaper American supermarket wines such as Paul Masson, Carl Rossi and Gray Fox can be found at as low as 200–300 rubles ($7-10), but U.S. wines mostly fall in the $10+ price category.

Many prestigious U.S. wineries have also been available on the Russian market for some time and continue to do well among a certain clientele. These include Paul Hobbs, Ridge, Opus One, Sine Qua Non, Kistler, Pahlmeyer, Diamond Creek and Château Ste. Michelle.

Russian wine importers themselves are usually seeking either entry-level wines (with unclear identity) or the most expensive wines (leading to low volumes of sales and a low P.R. impact).

“There’s no middle point,” said Olga Tuzmukhamedova, head of the Russian office of the Wine Institute of California.

The ratio of price to quality doesn’t work well in Russia. “Forget it,” said Sandro Khatiashvili, a member of the board of directors at wine distributor Simple Group. “Russians do not choose their wines based on price/quality relation. With quality wines people choose brands, and then goes price.”

Below a certain price point, consumers focus on a better package, a nicer label and a simpler taste over the point of origin.

Elena Kazakova of import firm Whitehall, which distributes Paul Masson in Russia, said: “Paul Masson sells well because it has such a long presence on the market, such an uncommon packaging and — considering all this — quite a normal quality and an attractive price.”

A matter of taste

Most often, Russians drink wine without concern for the food pairing. They consider wine something made to drink alone, which is why wines that appeal even to sophisticated Russian wine drinkers should have a personality of their own.

The Russian Pioneer Who Changed Napa

André Tchelistcheff, who was partially responsible for putting American wines on the world wine map, was a Russian émigré who fled the country during the civil war.

Tchelistcheff first studied agriculture in Czechoslovakia and then oenology at the French Institut Pasteur and the Institut National Agronomique. Eventually he became chief winemaker of Beaulieu Vineyards in Napa Valley.

The technological improvements and the new winemaking philosophy he brought to the U.S. were tremendous.

The winemaking techniques he pioneered such as fermentation control, better vineyard management and the use of small French oak barrels are taken for granted today.

Among the dozens of wineries that made use of his services are Château Ste. Michelle and Columbia Crest Winery.

“New World wines are ideally fit to the Russian taste,” said Christina Monkus, marketing director of import firm Eurowine. “We love friendly, fruity, bright taste. We do not want to spend 15 minutes trying to understand what’s in a glass. We like to be blown away with taste.”

Vlada Lesnichenko, the director of the premium Grand Cru wine shop network, also thinks that American wines stylistically fit into Russian taste preferences: “There is a growing interest in the U.S. wines, and in part it can be explained by our similarities in terms of food and wines style. Reds — fruity and rich, powerful but soft, with a good potential, but ready for drinking at the same time; round, but with high alcohol content. Whites — dense, oily, close to Burgundy style but easier to approach. Simplicity and clearness is the main reason to choose an American wine for many of our consumers,” she said.

Geographically, Russia is a great location for Californian reds. Alex Krause, exports director for Bonny Doon Vineyards, said: “It’s bloody cold in Russia most of the time, thus primarily [we sell] reds. I think in general wines that sell in the U.S. for $15-20 have the largest potential for doing volume in Russia.”

Lesnichenko agrees, specifying the potential of American Zinfandel: “Our clients recognize Zinfandel, which shows great both in middle and top wines — lush, rich and powerful, quite fruity, but with soft tannins.”

Right now, Russia accounts for only 0.6 percent of U.S. wine exports, and there are substantial obstacles to increasing that number, on both the commercial and educational sides.

New legislation banning advertising of alcohol and limiting possibilities to conduct wine tastings has forced importers to get creative.

The Wine Institute of California has been working to adapt to the new rules.

“We are tending to work more with chefs and connecting the wines with fine dining,” said Olga Tuzmukhamedova, adding: “The other difficulty is bringing to Russia samples of wines not currently present on the market, for our big annual tasting. These samples have to pass a long, expensive and bureaucratic customs control, which makes the whole event impossible to organize properly.”