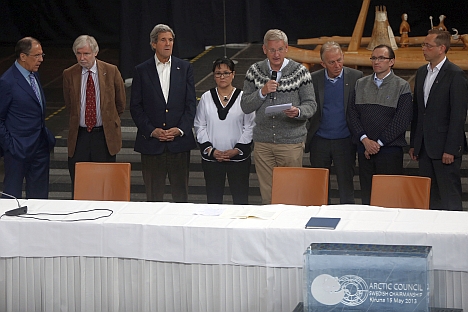 The Arctic is becoming “hotter”: the main reason is the rapid technological progress. China is coming to save the Arctic from the impending environmental catastrophe. Experts ask: What exactly does China intend to do in the Arctic?

The Arctic is dying. The latest recognition of the fact that irreversible processes have begun in the region as a result of climate change has come from the Swedish foreign minister, Carl Bildt. He spoke at a ministerial meeting of the Arctic Council in the Swedish town of Kiruna on May 15.

The Council includes eight nations that lie close to the kingdom of ice and cold. Canada, Russia, the United States, Finland, Iceland, Norway, Sweden and Denmark have good reasons to sound the alarm. Last year, the average annual temperature in the Arctic reached a critical level, and the melting of ice in the region has become irreversible as a result.

Carl Bildt also wrote in the Swedish newspaper, Dagens Nyheter, on the eve of the meeting in Kiruna. The Arctic is becoming “hotter” for several reasons, the minister said. The main reason is global warming and the melting of glaciers. The average annual temperature in the Arctic is growing twice as fast as elsewhere on Earth. This poses a grave threat to the whole planet’s ecosystem.

There is, however, another important aspect of the situation to take into account. Climate change and rapid technological progress are opening up new opportunities for people living near the Arctic, as well as for investment in the remote areas of the Far North by countries that have no geographical links with the region.

Sweden has been working hard over the past two years to forge a consensus between the different countries that have different points of view regarding the priorities for development in the Arctic. Arguably, the most important result of this work is that, from now on, the environment will be high on the agenda of the most senior-ranking politicians.

Meanwhile, the so-called Arctic countries should focus their efforts on developing new measures to reduce the emissions of greenhouse gases and soot particles into the atmosphere.

No oil wells in the Arctic!

Sweden has decided against trying to pressure all the Arctic countries into accepting a total ban on drilling oil wells and producing other natural resources north of the Polar Circle. The head of the Swedish Foreign Ministry explained that, even if Stockholm were to insist on such a ban, getting all the other countries on board would be utterly impossible.

Representatives of the Swedish branch of Greenpeace, on the other hand, believe that Sweden has lost its chance to steer the Arctic Council in the right direction. They believe that drilling oil and gas wells is only acceptable in areas of low risk. The Arctic glaciers are where that risk is at its highest.

Meanwhile, analysts say that interest in the Arctic’s oil reserves has already begun to wane, ban or no ban.

“The oil companies are very pragmatic and practical,” says Mikael Höök, a senior lecturer at Uppsala University in Sweden. “They are interested in easier and cheaper ways of producing oil. They are also looking into possible alternative energy sources.”

“The disaster at the BP oil platform in the Gulf of Mexico in 2010 is yet another reason for the oil companies to think very carefully before venturing into the Arctic,” Höök says. “If an oil spill happens in the Arctic, the clean-up operation there could simply bankrupt even the largest of the oil giants.”

Not everyone, however, is so pessimistic about the Arctic. Suffice to say, the meeting in Kiruna was attended not only by senior ministers and representatives of nongovernmental organizations from the Arctic nations, but also permanent observers from Germany, France, Britain, Poland, the Netherlands and Spain.

Although observers do not have a vote, observer status helps the countries in question to step up their presence in the Arctic. A total of 12 countries now have observer status at the Council. This could bolster the Council’s international standing and clout as a political and environmental body.

The countries taking part in the Council’s work profess the noblest of intentions: namely, to save the Arctic from the impending environmental catastrophe. It is no secret, however, that environmental issues have lately become a powerful economic instrument and a means of putting pressure on competitors.

Many experts are therefore asking themselves: What exactly does China intend to do in the Arctic? Beijing vehemently denies accusations that it merely wants to grab the region’s natural resources and establish a military presence there.

Nevertheless, it is clear that China and other Asian countries would benefit from the development of the Northern Sea Route more than almost anyone else on the planet.

Back in 2009, scientists began to predict that the Arctic could become ice-free before the end of this century. Many saw that not as a global catastrophe but as a huge opportunity to develop new maritime routes via the North, as well as a chance to introduce certain innovations in the exploration and production of natural resources.

For example, using the Northern Sea Route would cut the journey time between Norway and China by 18 days for a mid-sized dry cargo freighter, saving 580 tons of fuel. The route via the Arctic is shorter by about 4,000 nautical miles (3,976 miles), compared to the route via the Suez Canal. If the journey via the Arctic is made in July, it does not even require the use of icebreakers.

Proponents of the Arctic route emphasize the environmental benefits, suggesting that reducing the distance traveled by ships would significantly cut emissions into the atmosphere. They fail to mention, however, that the Suez Canal is half the world away from the Arctic.

Emissions in the Arctic region will inevitably rise sharply if ships begin to use the Northern Sea Route instead of the one via Suez.

The article is first published in Russian in the Expert magazine.