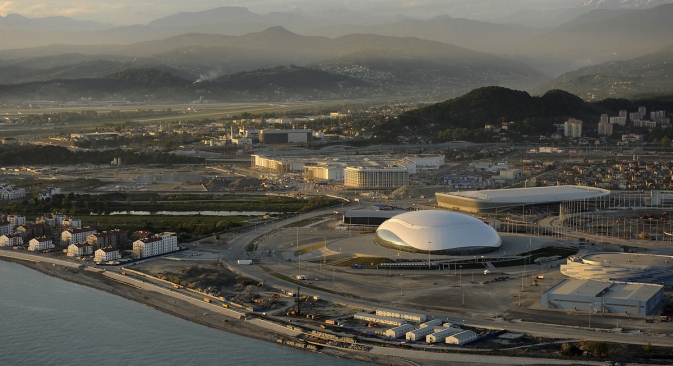 The 2014 Sochi Olympic Games are expected to be the most expensive. Source: Mikhail Mordasov

Russia is set to spend over $51 billion on the 2014 Winter Olympic Games in Sochi.

The 2014 Sochi Winter Olympic Games are set to become the most expensive Olympics ever. Russia will have spent more than $51 billion on the Olympics by 2014.

View the gallery: Building boom for 2014 Winter Olympics in Sochi

By comparison, China spent $45 billion on the 2008 Beijing Summer Olympics, and the UK invested about $30 billion in the 2012 Summer Olympics in London. Like China, Russia has primarily been investing in municipal infrastructure, whereas investments in Olympic venues, including stadiums and practice facilities, are estimated at slightly more than $7 billion.

Russia’s Deputy Prime Minister, Dmitry Kozak, is certain that this money will turn Sochi into Russia’s largest resort, and one that will successfully compete in the global market. Sochi Mayor, Anatoly Pakhomov, speaks about how the city will benefit from the $43 billion investment in infrastructure.

Transport infrastructure accounts for the bulk of the investments by the federal government, at about $20.9 billion. Anatoly Pakhomov hopes that this will be enough to deal with traffic problems. Stretching for about 160 kilometers along the Black Sea, the city has only one main road – Kurortny Avenue – hence the jams. “I don’t think even people in Moscow knew what a traffic jam was back in Soviet times. But in Sochi, we knew,” Pakhomov says.

A total of 260 kilometers of roads will be built by 2014. Traffic capacity is expected to increase between 80 and 150 percent, and vehicles will be running 25 percent faster on average.

Money will also be invested into the railway system. Just like the subway network in Moscow, the rail network will become the primary mode of municipal transportation here.

“Thirty platforms are being built; the electric trains will make stops in every community,” Pakhomov said.

Russian Railways’ largest project is the combined automobile and railway road between Adler and Rosa Khutor Extreme Park at Krasnaya Polyana. The road will cost $6.6 billion to build, making it the most expensive Olympic facility, according to a spokesman for the railway monopoly. It will have a capacity of 8,500 passengers per hour with trains running every 10 minutes during the Olympics.

Basel (Basic Element) holding is the largest privately owned investor in the Sochi transport infrastructure. The company is finishing a new airport terminal, having already invested 6 billion rubles (about $191 million) in the project. In June 2012, the airport had a capacity of 1,600 people per hour. The figure will rise to 3,800 people per hour as construction finishes in 2014. In May, the Adam Smith Institute called the Sochi terminal the best regional airport in Russia.

Megafon and Rostelecom are building the communications infrastructure. Each paid $130 million for the Olympic sponsorship package. Rostelecom is focusing on landlines, while Megafon is concentrating on mobile communications. The former will build more than 300 kilometers of fiber-optic cable and provide telecom services at the 33 Olympic venues, a spokesman for the company said.

These services will include regular as well as wireless Internet access, Voice over IP and dedicated links for special stadium scoring and timing systems, he added. Megafon will be the only cellular company at the Olympic Sochi
venues during the Games.

When the International Olympic Committee selected Sochi as the host city for the 2014 Winter Olympics, the Sochi region had a considerable gap between power generation (100 megawatts) and consumption (400 megawatts). The shortage is currently covered by neighboring regions. Generating facilities with a combined capacity of 1,424 megawatts are being built for the 2014 Games.

What international inspectors criticized the most was the quality of the sewage discharged into the Black Sea. New disposal plants with a capacity of 140,000 cubic meters of sewage have been built for the Olympics.

According to Pakhomov, the degree of purification is high, and pipes go more than 2 kilometers deep into the sea.

“When the completed facilities were presented to us, the representative of the company that supplied the installations was ready to drink the water coming out of the pipe.”

What will happen to the Olympic infrastructure after the Games? In February, Kozak signed the program for the use of communal and engineering infrastructure, which will be handed over to the city administration following the Olympics. The municipal budget will have to pay an estimated additional 2 billion rubles (around $64 million) every year to maintain the facilities.

Pakhomov believes that Sochi should become not only a top quality resort, but also a venue to host large international events, such as conferences, exhibitions and sports tournaments.

The article is based on materials from Vedomosti.