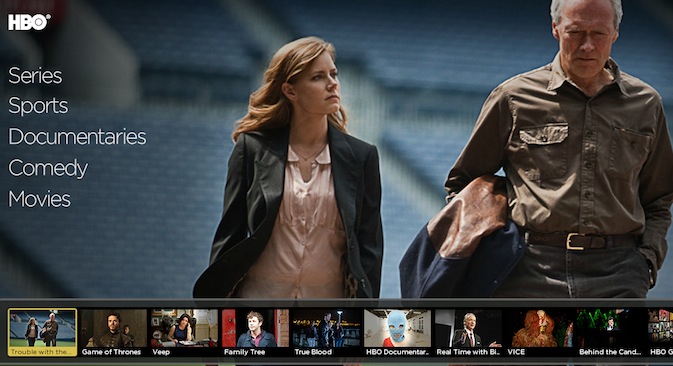 American TV company HBO and its Russian counterpart Amedia have signed an agreement that will allow Russian viewers to watch the HBO films shortly after U.S. audinece. Source: hbo.com / screenshot

Russian film company Amedia gets exclusive rights to HBO TV series. Russians will be paying a fifth of what Americans pay for Game of Thrones, Newsroom and True Blood.

Amedia, a Russian film company has signed a five-year output deal with HBO, giving it exclusive rights to some of the most popular HBO series: Game of Thrones, Newsroom, Girls, True Blood and Boardwalk Empire.

Amedia will use the content for its own cable channel Amedia Premium, which will be available in the country’s leading digital TV packages starting on May 31, Alexander Akopov, Amedia General Director, told Vedomosti.

HBO and Amedia had planned to launch a cable channel under the HBO brand in Russia back in late 2012, a source familiar with the situation says; yet the companies took too long discussing the terms

Amedia will launch the project on its own, the HBO content constituting the quality core of the new channel, Akopov says.

According to him, HBO has only 102 hours of premiere content per year, which is not enough for a 24-hour TV channel dedicated exclusively to series despite HBO’s vast library of original films.

HBO airs many local sporting events but there is no sense buying those in Russia, Akopov says. So Amedia bought shows from other paid channels—Starz and Showtime—and launched the channel under its own brand.

Amedia Premium viewers will be able to watch the HBO series immediately after the American audience, Akopov says. The subscription, however, will be much cheaper in Russia, $3.3 a month, compared to $15-20 in the United States. The series will also be available at amediateka.ru for a monthly fee of $10.

“Unfortunately, our people are not used to paying for content,” he said.

This is why experts are certain that HBO did the right thing in selling exclusive rights to its shows in Russia to Amedia.

“This way, they will only have profits and no costs. If the project proves successful, HBO will probably come to Russia to work under its own brand,” a top manager of a Russian cable channel says, on condition of anonymity.

The article is based on materials from Vedomosti newspaper.

Amedia was founded by Alexander Akopov in 2002. Leonid Blavatnik’s Access Industries currently holds a majority stake in the company, which is best known as a producer of television series under western licenses. Its most successful projects include Bednaya Nastya (Poor Nastya), the first project shot together with Sony Pictures, which was the highest-rated Russian series for a long time, and Ne Rodis Krasivoy (an adaptation of the Colombian TV series Yo Soy Betty La Fea). In 2012 Amedia reported revenues of $60 million.