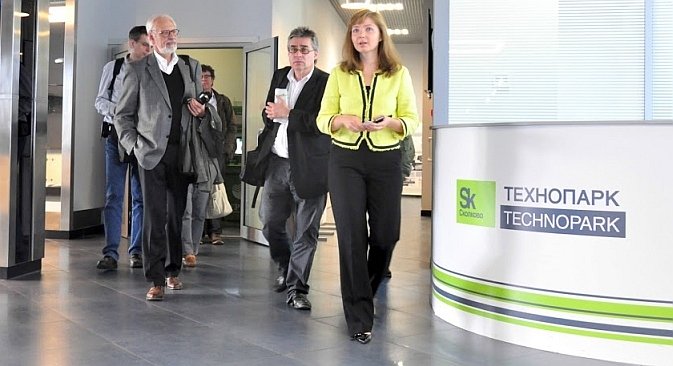 In the 2000s, the Russian government came to regard technoparks as a perfect means of fostering innovation in the country's economy.

Technoparks began to spring up all over the country, thanks to numerous government programs and initiatives. Five years ago, a World Bank study confirmed that one of Russia’s provinces, the Republic of Tatarstan, had more technoparks per capita than the country which invented them — the United Kingdom.

There are currently about 60 registered technoparks in Russia, of which 10 or so have the potential to nurture innovative, high-tech companies that can successfully compete on the domestic as well as global market.

VIDEO: Technopark Skolkovo to give boost to Russian startups

Russian technoparks do not have any distinct industry specialization. Most of them pursue technological innovation in areas designated as national priority by the federal government, including biotechnology, pharmaceuticals, nanotechnology, IT, space and nuclear technology.

Almost every single one of the Russian technoparks aims to establish an IT cluster; other popular industries of choice include nanotechnology, pharmaceuticals and biotech.

The choice of specialization largely depends on the availability of the required expertise — including universities and research centers — in the respective home region. Another factor is the profile of the region's economy. For example, Tatarstan, which has a large petrochemicals industry, has established KhimGrad Technopolis, with an aim to nurture startups and small businesses specializing in chemicals.

The most successful technoparks

The vast majority of Russian technoparks are very young, so the only thing that distinguishes a successful technopark is its residents.

For example, the technopark in Tomsk is a special economic zone, and the region’s government is trying to create an attractive climate for startups as well as large Western high-tech companies.

The Tomsk technopark’s residents specialize in areas that have a good chance of triggering a new global wave of innovation, including the development of a vaccine against cancer, LED lighting, plasma technologies and the use of nanotechnologies in medicine. More than 10 of the technopark projects include large Western partners, such as Nokia Siemens Networks.

The successful Russian technoparks all have one thing in common: They are based in cities that host leading universities, research centers or clusters of privately owned high-tech companies. Such technoparks and business support systems were actually designed right from the start to cater to the needs of specific companies or startups already operating in the respective regions.

For example, Russia’s oldest nuclear center — the town of Obninsk in Kaluga Region, two hours’ drive from Moscow — became the home of several successful pharmaceutical and biotech companies back in the 1990s.

In addition, the region’s government has managed to attract several global pharmaceutical giants (including Sanofi), which have built research and production facilities there. It is these existing companies that the technopark now being set up in Obninsk is designed to support and retain. Time will tell how successful the new technopark will turn out to be — but it will definitely not lack for residents.

The technopark being set up at the Skolkovo innovation center just outside Moscow is something of a special case. The Skolkovo project managed to attract several dozen anchor investors at the very early stage, including such international high-tech giants as Boeing, Cisco and Microsoft.

Skolkovo offers its residents unprecedented tax breaks and huge grants, so it is in a position to choose only the best innovation projects from all over the country. That is why Skolkovo stands out even among the most promising regional innovation centers, in terms of the number of companies developing breakthrough technologies, as well as the general level of specialists involved in all these projects.

Examples of the innovative products and services developed in regional technoparks and capable of winning a share of the global market are few and far between for the moment — but they do exist.

One of them is the completely new service and software for cheap 3D visualization based on 2D images. The product, which is selling well in Europe and the United States, was developed by 3dbin, a university-based startup in Tomsk. The company has recently opened an office in California, and its customers include global giants such as eBay.

As for Skolkovo, many of its residents are spin-off projects launched by large, Russian, high-tech companies whose products are well known in the West. These include Yandex, ABBYY, Kaspersky Lab and IPG Photonics Corp (IRE-Polyus), which develops laser technologies.

The most advanced of the Russian technoparks take their cue from America, France and other global leaders. They market and promote the products and services developed by their residents, set up meetings with potential investors, and facilitate participation in various exhibitions and industry events. Yet the level of these support services (and of the specialists who provide them) remains well below the benchmark set by the best European technoparks.

Russia’s reputation as an investment destination still leaves much to be desired. Being a technopark resident offers some additional investment security assurances, but much depends on the specific technopark and its home region.

Some of the Russian provinces regard high-tech industries and innovation as an important priority. The technoparks they host enjoy full support of the respective regional governments, which often designate senior officials (deputy governors, in most cases) to be in charge of innovation policy.

As a result, technopark residents — especially foreign investors — enjoy greater access to regional government officials. In Russia, that makes a lot of problems much easier to resolve. The provinces that host successful technoparks (such as Kaluga Region and Tatarstan) tend to have a much better investment and business climate than the rest of the country.

The Skolkovo Innovation Center is a special case even among the most successful of the Russian technoparks. It is essentially a domestic, offshore haven for high-tech companies. Its residents enjoy massive tax breaks and other privileges, including a special system of tax administration and technical regulation, exemptions from immigration restrictions, etc.

How to set up shop in a technopark

As a rule, all applicants who wish to become technopark residents are required to pass rigorous vetting. They need to demonstrate to a special commission that the project they propose represents genuine innovation, and that their business proposal is in line with the goals and objectives of the technopark.

For a foreign project to become a Skolkovo resident, it needs, first, to register as a business in Russia, and second, to have Russian researchers as partners. In addition, the company in question must pursue R&D in one of Skolkovo’s designated specialist areas: nanotechnology, biotechnology, nuclear technology, space, and energy efficiency.

The application must pass a formal vetting by a committee of experts before it is submitted for what is essentially an anonymous evaluation by randomly selected specialists who are on the Skolkovo panel of experts. The panel includes Russian and Western scientists, venture capitalists and top managers of successful high-tech companies.

The application review process usually takes about a month, which is not bad at all by international standards. In Singapore, for example, an evaluation by "A Star" (the local science, technology and research agency) can take up to six months.