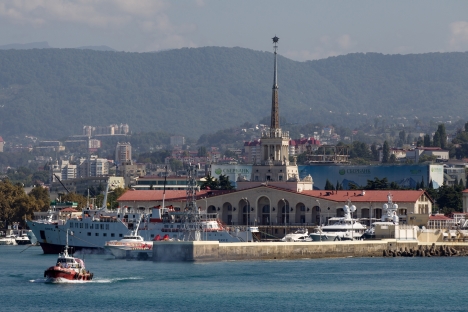 The port in Sochi is one of the largest at the Black Sea coast. The port in Taman can be the largest one in Russia. Source: Mihail Mokrushin / RIA Novosti

The port in the Krasnodar region is set to be operational by 2018 and is expected to cost a total of $7 billion.

The plans to raise private capital for building the new port of Taman in the Krasnodar region are reported in the investment declaration issued by Rosmorport.

The last version of the federal target program, “Development of Russia’s Transport System,” earmarks a total of 76 billion rubles ($2.3 billion) for the project. However, in reality, construction of federal property at the port will require 115.5 billion rubles ($3.5 billion).

The government hopes to close the gap by granting concessions to private investors for the port’s infrastructure. The list of items slated for concession (though not yet finalized) may include utility networks, moorings and an approach canal.

Funding of the port’s federal property items has been raised on many occasions, according to a Kommersant source familiar with the situation.

“Several years ago, the key investors promised to give cash for the terminals, provided there was an infrastructure; no one wanted to invest in the infrastructure. They decided the government would
itself build the facilities, but now the budget funds are exhausted,” said the source.

The total cost of the port is set at 228 billion rubles ($7 billion), according to the federal target program. The port is expected to come into operation in 2018, and it will handle over 90 million tons a year by 2020. The project is currently being reviewed by government experts.

A company — RMP Taman — has been set up and is already purchasing the land plots.  RMP Taman is wholly owned by Rosmorport, but the Krasnodar region will received 25 percent.

Krasnodar, the biggest city on the route to the Black Sea

The declaration says the company will select private investors for lending the land plots, while it constructs and operates the infrastructure. Vladimir Lisin’s UCL Holding sought a stake in RMP Taman, but the Transport Ministry decided that the terminals’ builders should be separate from the management company.

Taman already has a sea port located on the Zhelezny Rog Cape, in the village of Volna, which is not far from the Taman settlement in Temryuksky District.

The port specializes in transshipment of oil and petroleum products, liquefied hydrocarbon gases, ammonia and grain for export. However, the existing port has a very modest cargo turnover, which stood at 2.2 million tons in 2012 — a far cry from what is needed.