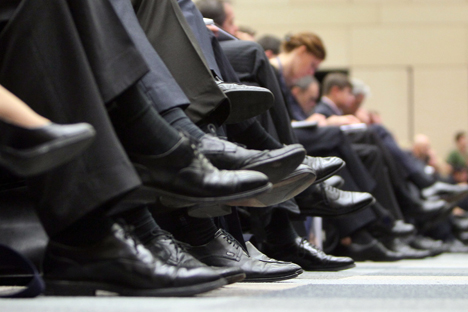 The Oppenheimer International Bond Fund has invested more in Russian bonds than in U.S., British or German instruments.

Over the last year, the share of Russian assets held by the Oppenheimer International Bond Fund has increased from 7 percent to 10 percent of its portfolio as of March 31, the Fund's report indicated.

The value of its Russian assets is estimated at $1.29 billion. In the first quarter of 2013, the share of Russian securities continued to grow, adding 1.8 percent.

Sovereign and Vnesheconombank bonds account for almost $400 million of the Fund’s Russian investments. The rest are distributed between various corporate bonds, including Gazprom, Sberbank, Novatek, MTS, VimpelCom and VTB.

In addition, the Fund had 4.5 billion ruble ($141 million) bonds for settlement in April and June.

No representative of the Oppenheimer fund was available for comment. In the Fund's report, management states that its intent in the first quarter was to “increase the share of corporate debt instruments of emerging markets, Russia and Brazil in particular.”

They expect interest rates to remain stable on the developing markets, with just a small chance of an increase.

Sergei Suverov, of Russian Standard Asset Management, opined that the large share of investment in Russian bonds may be linked to their relatively high yields against the background of the generally low ruble volatility, relatively low public debt against GDP and prospects of the government relaxing monetary policy.

The United States leads with 65.3 percent of the portfolio, but in other respects its composition is very much like that of the Oppenheimer International Bond Fund.