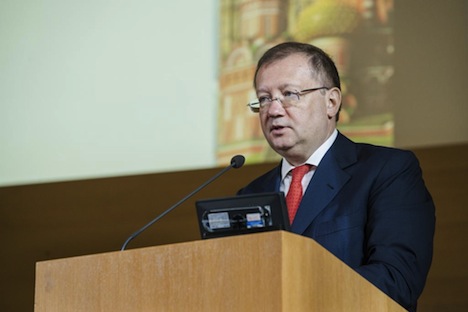 Kaluga, Penza and Tatarstan set out their stall for investors at the Russo-British Chamber of Commerce’s annual conference.

Investing into Russia and its regions was the focus of the annual Business Forum organised by the Russo-British Chamber of Commerce in London on June 6.

According to Trevor Barton, the RBCC Executive Director, Russia is UK’s fastest growing export market with a solid growth rate of 35-40 percent per year.

He says the demand for imported goods in Russia is as high as ever, in particular thanks to rapidly growing IT, telecom and construction industries, which are always hungry for the latest know-how.

The “Made in UK” label is a strong selling point, Barton noted: “The key thing is that nobody should sell on price into Russia. What they should sell on is quality. Russians are very discriminating people and they want to buy the best-quality goods.”

Despite the seeming abundance of opportunities, there are less than 1,000 representative offices for British firms – significantly fewer than the number of German companies registered (about 6,000). Many UK companies still don’t realise they have products that will find a market in Russia, Barton said.

“We work very hard travelling around the UK, talking to companies that are either are not yet exporting, or perhaps are exporting to other markets,” Barton adds. “We say to them: ‘Go to Russia, meet Russian people, get some help in setting up meetings, see what sort of market in might be for you, and then decide. But don’t decide on the basis of not having been there.’”

Most investors say that bureaucracy, corruption and poor rule of law continue to undermine confidence in Russia. But experts at the RBCC conference said that many problems can be avoided with proper preparation before entering the market.

“Probably half of the complaints that Western European companies have in Russia over imports and bureaucracy overall is because they don’t follow the same compliance rules and business ethics in Russia than they are used to doing at home,” said Ulf Schneider, founder of Russia Consulting. “You need to make sure you understand these and follow them closely.”

Those who are prepared to take on the challenge share one common quality and are properly rewarded for it, said Nick Archer, chief of UK Trade and Investment: “It’s called bravery, an appetite for risk. […] Businesses tell us that once there they’re amazed by the opportunities and they’re amazed by how much more straightforward it seems than they perceived it to be from the outside.”

To illustrate this point, RBCC invited representatives of some of Russia’s most attractive regions for foreign investors – Kaluga, Penza and Tatarstan.

Kaluga, sometimes referred to as the “Russian Singapore,” has managed to become a leading region in terms of industrial production and investment climate in the last 10 years. In the absence of natural resources deposits, it began developing manufacturing by creating industrial parks and offering tax benefits to investors.

To show his interest in reforms, the region’s governor, Anatoly Artamonov, even started handing out his mobile number to local businessmen – a move quite uncommon for a Russian official. As a result, over 70 plants owned by the likes of Volkswagen, Renault and L’Oreal operate inside Kaluga’s automotive, logistics and pharmaceutical clusters.

The region’s deputy governor, Vladimir Potemkin, told the RBCC conference that the growth will continue: “This year we will open a metallurgical plant, several cement plants are also in the works – they will form part of the new construction cluster. We are also beginning construction of two new airports. One of them – Yermolino – will become Russia’s first and Europe’s largest low-coster hub.”

Shamil Ageyev, from Tatarstan’s Trade and Industry Chamber, emphasized to investors at the conference the republic’s commitment to innovation. The regional government’s current priority is construction of a $670 million technology hub outside Kazan, called Innopolis. It will feature an IT park, university, full-scale residential complex and a business incubator.

US Carnegie Mellon University, renowned for its strength in IT, is among the project’s potential partners.

Barton said that with lots of opportunities available to investors in Russia, it is important to keep cooperation a two-way street: “Russian people are now coming more and more into UK to invest, not only into expensive residential property. They’re investing into commercial real estate, they’re looking at M&As with UK companies, particularly in the hi-tech sector and UK start-ups.”

Participants in the conference said that the Russian and UK governments both appeared very supportive of promoting bilateral investment and trade, with annual turnover of over $23 billion having just beaten pre-crisis levels.