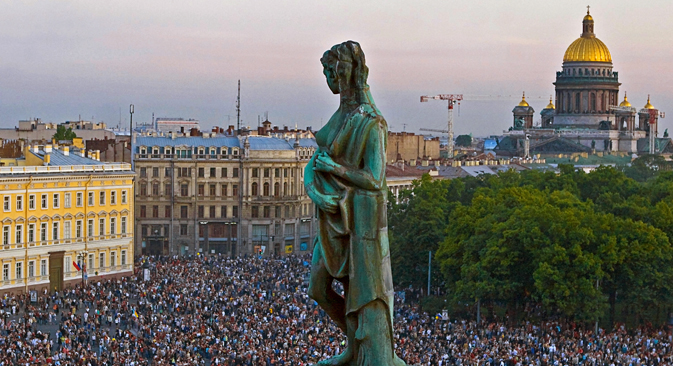 According to World Tourism Organization estimates, St. Petersburg ranks eighth among the most attractive cities for tourism. Source: RIA Novosti

Tourists flocking to Russia’s northern capital for the highly popular White Nights season, as well as participants in the St. Petersburg International Economic Forum, will put the city’s services sector to the test.

Statistical data from previous years suggests that every dollar spent by the organizers of the St. Petersburg International Economic Forum (which will take place on June 20–22 this year) generates $5–7 for the city’s services sector.

During their three or four days in the Russia’s northern capital, SPIEF participants and guests usually spend between three and five times more than average tourists. According to various estimates, forum visitors spend an extra $200–$500 a day on shopping and entertainment.

However, the higher cost has not deterred people from coming: Russia’s unique forum for business meetings and contacts will again accommodate 5,000 guests from 60 countries.

Comfort at a premium

St. Petersburg currently has 458 hotels (according to Booking.com), including only 13 that are rated five stars and 48 that are four stars.

International experience has shown that accommodation prices tend to creep up during large-scale events, sky-rocketing when demand greatly outstrips supply – and St. Petersburg is no exception.

Hotel room prices soared 200–400 percent for the SPIEF dates. Yet there are almost no vacancies, with two weeks to go before the event kicks off.

Most hotels were booked for those dates months ago. In addition, many hotels do not offer rooms by the day, selling four-day packages (June 19–23) instead, with payment required within 5–7 days and cancellation penalties.

In the opinion of Tamara Chernykh, general manager of the Golden Garden Boutique Hotel, there is no shortage of hotels in St. Petersburg at present. However, the number of rooms is insufficient, given the number of tourists that the city could potentially welcome.

“According to World Tourism Organization estimates, St. Petersburg ranks eighth among the most attractive cities for tourism. But the city cannot accommodate such numbers of tourists today, if only because of the limitations of its airport’s throughput. Once it is increased, there will be a shortage of hotel rooms,” Chernykh said in an interview with RBC.

There is no such problem with restaurants in St. Petersburg. The sector is highly developed, and there is no shortage of quality eateries in the city.

The SPIEF website lists the 48 best restaurants that will offer a guaranteed discount or a compliment on the house to all forum participants.

According to the general director of the Svoi v Gorode restaurant group, Leonid Garbar, the SPIEF has a major economic effect on the city’s restaurant sector, with customer traffic rising by 10–12 percent and the average bill increasing by 25–30 percent.

However, restaurateurs and hoteliers complain that most events in St. Petersburg coincide with the high season – May and June – when chasers of the city’s White Nights come to town.

During this time, occupancy rates approach 100 percent, even when there are no forums taking place. “It is necessary to space events out evenly throughout the year, to achieve a better effect for the economy,” Garbar was quoted by Vedomostias saying.

The economic effect of the SPIEF is reflected in at least one other large-scale project.

According to organizers, the forum has become so large during its 17 years in existence that demand for participation has far outgrown the Lenexpo exhibition center’s capabilities.

Thus, construction on the new ExpoForum exhibition center is nearing completion in the town of Pushkin, located 9 miles from St. Petersburg.

ExpoForum, a Gazprom affiliated company, is building the center, which is valued at $1 billion. It will include 1.5 million square feet of outdoor and indoor exhibition space, a congress center for 7,000 people, two premium hotels and a business center.

The forum will be able to accommodate far more guests at its new location, which will benefit the city as well.