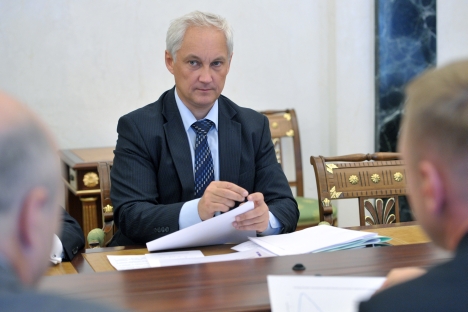 Economic Development Minister Andrei Belousov confident about the forum to be held June 20-22.

“Finding Resolve to Build the New Global Economy” – this is the motto of the upcoming 17th St. Petersburg International Economic Forum (SPIEF), which will open its doors to guests on June 20.

“A forum is a meeting place for discussion. Essentially, it is clear ahead of this St. Petersburg Forum – much like the Davos Forum – whether it will be a success judging by the list of participants scheduled to attend. So, with participation already confirmed by 190 heads of major foreign companies and 428 heads of Russian companies, and the number of participants increasing literally by the minute, we can already say that the forum is a success. We expect to receive some 5,000 people all in all,” Economic Development Minister Andrei Belousov told journalists.

German Chancellor Angela Merkel and Dutch Prime Minister Mark Rutte have been invited as honorary guests. The former was personally invited by Russian President Vladimir Putin, who is also expected to attend the event.

“Forum participants will have a unique chance to speak with the heads of the world's largest companies – all smart and reputable people – in person, listen to their speeches and have a say in the debates, [and] possibly, even get their message across. This fact alone is enough to turn the forum into an interesting platform for business people all over the world. This year, we are expecting official delegations from 66 different countries,” said the deputy minister of economic development, Sergei Belyakov.

On a lighter note, SPIEF participants will arrive in the city just in time to enjoy St. Petersburg's white nights, which is also a good reason to visit Russia, the official added.

Russia is holding the rotating G20 presidency this year – a fact that has had a pronounced impact on the forum's program, with many topics echoing the G20 agenda, Belousov explained.

The Y20 youth summit of the G20 opens in St. Petersburg

An Energy Club Summit – a leading event in the energy community that brings together heads and experts from the world's largest companies each year – will meet on the forum's sidelines, as per tradition.

To wind down after the official program, the Ministry of Economic Development has come up with numerous forms of entertainment. For example, there will be a classical music concert involving Il Divo and Div4s performing to the accompaniment of a symphony orchestra.

Events in St. Petersburg's top theatres and concert halls have also been arranged, including the Mariinsky Theatre, the Mikhailovsky Theatre, Philharmonic, and Opera House.

“We have planned a very intense cultural program,” Belousov said in conclusion.