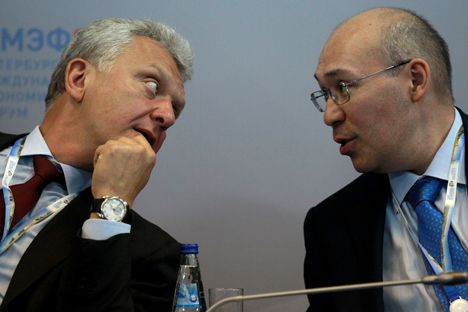 Russia has benefited most from growing trade within the Customs Union, but the organization risks repeating the EU's mistakes if it doesn't build effective institutions, according to Eric Berglof of the EBRD.

Russian and Western officials universally lauded the Customs Union of Belarus, Kazakhstan and Russia at a panel on economic integration at the St. Petersburg International Economic Forum (SPIEF).

“In 2012, Russia's trade growth within the Customs Union significantly overtook its growth in the rest of the world,” said Tatiana Valovaya,Minister for Integration and Macroeconomics of the Eurasian Economic Commission (EEC).

"A number of important economic links that existed between Soviet republics have been lost in the last 20 years," said Maria Makarova, Marketing Director of the B2B Center. "Today e-commerce is helping restore those links."

Viktor Khristenko, Chairman of the EEC,went further: “The European Bank for Reconstruction and Development [EBRD] called the Customs Union the most successful economic integration project across the former Soviet space.”

However Eric Berglof of the EBRD offered a word of caution: “There are very real political and economic consequences of the Eurasian Economic Space. The positives include trade creation and labor mobility; the negatives include less efficient trade with uncompetitive partners and an uneven distribution of the benefits (differential effect). Clearly, Russia has benefited more from the Customs Union to date than its partners.”

“As we learned from the EU,” concluded Berglof, “if you integrate too fast – it can backfire. So you need to be careful and focus on improving common institutions and mitigating the differential effect.”

Khristenko was quick to counter that “the idea for the Customs Union was voiced by Kazakhstan's President Nursultan Nazarbaev back in 1994. We've only taken the real steps in the last three years.”

Russian Deputy Prime Minister Igor Shuvalov emphasized the economic nature of the project. “There are people in all three countries – mostly the older generation – with fond memories of the USSR who would like to think of the Customs Union as a political force in the world. I say with complete honesty – the union of political institutions is not on the agenda of this organization at any level.”

Putin seeks to develop economic ties with The Netherlands

“The EU is cautious about economic integration with the Customs Union because they feel that they have different values,” said Alexander Rahr, Senior Consultant at Wintershall.

“The US has been offering the EU a free trade zone for the last 15 years, but Europe only reacted positively very recently. Meanwhile they are lukewarm about a free trade zone with the Customs Union despite this option being more beneficial to them.”

The Customs Union of Russia, Belarus and Kazakhstan came into existence on January 1, 2010 as part of an attempt to create a single EU-type Eurasian Economic Space by 2015. In July 2011 customs borders were removed between the three countries, leading to surging trade levels.

Other countries that have expressed interest in joining the EEC include Armenia, Kyrgyzstan, Tajikistan, Ukraine and Vietnam. Former US Secretary of State Hillary Clinton denounced the EEC as an attempt by Russia to reassert control over the post-Soviet space.