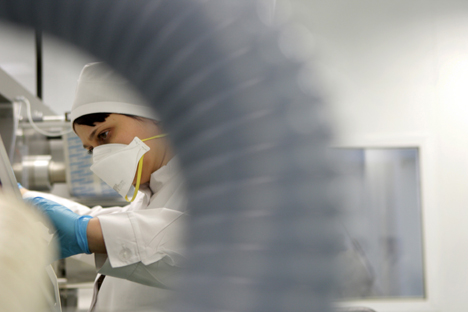 Experts believe, the decision to sell the business may well indicate that Pharmstandard’s owners no longer expect any growth in the segment. Source: Valery Melnikov / RIA Novosti

Pharmstandard, a major Russian pharmaceuticals manufacturer, is considering selling its non-prescription drug business. The company's owners put a price tag of $2.5 billion on the asset.

The sale of Pharmstandard's over-the-counter (OTC) medicines business is still in the early stages, Bloomberg said in late June, citing sources in the know. It is also known that Citigroup is helping organize the process, and the assets are valued at roughly $2.5 billion.

“We do not comment on rumors circulating on the market,” investor and shareholder relations officer at Pharmstandard, Irina Bakhturina, told Kommersant.

She confirmed, however, that the company was continuing to cooperate with Citigroup, which was one of the coordinators of its IPO back in 2007.

The bank is helping the pharmaceutical manufacturer conduct a buyback and “some other things.” Citigroup was unavailable for comment.

Kommersant's source in the pharmaceuticals market was aware of the plans by Pharmstandard's shareholders to sell its non-prescription drug business: “I was told of a similar amount they were planning to raise.”

Pharmstandard runs eight factories in Russia (including one that produces medical equipment) and one more in Ukraine.

Augment Investments Ltd., which is controlled by Viktor Kharitonin and Yegor Kulkov, owns 54.3 percent in the company; Pharmstandard-Leksredstva holds 8.44 percent more, while the remaining shares are in free-float on the Moscow and London stock exchanges.

In 2012, medicine sales were at 50 billion rubles ($1.6 billion), with net profit at 9.2 billion rubles ($296 million). In the estimation of the DSM Group, Pharmstandard is the number one manufacturer in the OTC drug segment, with a share of 7.6 percent in monetary terms.

The decision to sell the business may well indicate that Pharmstandard’s owners no longer expect any growth in the segment, believes general director of Stada CIS, Ivan Glushkov.

It would be unreasonable for Pharmstandard to expect any growth from its main non-prescription medications, director of the Center of Social Economy, David Melik-Guseinov, believes.

In his opinion, Arbidol – the key brand in the company's portfolio, with sales at 3.9 billion rubles, or $127.9 million, in 2012 – is losing ground to a great number of new, immune-response-modifying medicines on the market.

Meanwhile, Corvalol may soon become a prescription drug, as it contains some strong barbiturates.

Among additional risks involved in the sale, VTB Capital analyst Ivan Kushch cited the possibility that some OTC drugs might soon be categorized as prescription medicines, as well as a possible ban on non-prescription drug advertisement touted by the Ministry of Healthcare.

Pharmstandard's OTC drug business may be appealing to international companies seeking to move production to within Russia, in a bid to avoid import duties, Natalia Smirnova of Deutsche Bank told Vedomosti.

US pharmaceutical giant ready to invest $500 million in Russia

“It [Pharmstandard's OTC drug business] may serve as an entrance ticket to the Russian market,” she said. Yet the expert agreed that the asking price of $2.5 billion was overstated.

On June 25, Pharmstandard's depositary receipts slid 1.7 percent on the London Stock Exchange, bringing its capitalization down to $3 billion.

Kushch believes the estimated value of $2.5 billion to be “overly optimistic” for the non-prescription business. According Glushkov, the optimal price would be close to $1 billion.

Pharmstandard's OTC drug business is unlikely to catch the attention of any foreign players, since the brands only sell on the Russian market, Melik-Guseinov believes.