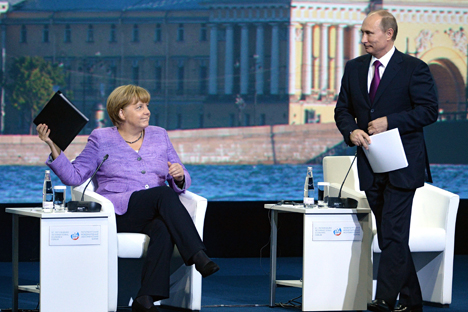 The St. Petersburg International Economic Forum that ended on June 22, brought a promise of amnesty to convicted businessmen and a massive reform of the court system, in addition to shaking the monopoly of Gazprom.

The St. Petersburg International Economic Forum that ended on Saturday, June 22, was full of surprises from the outset and almost until its end. During those three days, the fate of national reserves that would fall like golden rain on infrastructure companies – above all, on Russian Railways (RZD) – was decided.

SPIEF brought a promise of amnesty to thousands of convicted businessmen and a massive reform of the court system, in addition to shaking the monopoly of Gazprom.

One of the most sensational events, however, occurred on the eve of the forum, when the main Russian media outlets published a statement, citing the government press service to the effect that RZD head Vladimir Yakunin had been sacked.

A canard in the media and wood grouse on a plate

Yakunin later stated that, at that very moment, he had been dining on stewed wood grouse together with President Vladimir Putin: The false rumors about his resignation did not spoil anyone’s appetite.

Even so, on the fringes of SPIEF, Yakunin told Prime Agency that he was determined to find out who stood behind the incident.

The media “canard” proved to be even more delicious than the wood grouse, as the situation came in for comment at just about every meeting and on the sidelines of the forum.

Senior Deputy Prime Minister Igor Shuvalov could not help commenting on the hacker attack. He said it was a provocation that may have targeted Yakunin, his deputy (Alexander Misharin, who was declared the new head of RZD) and the government as a whole.

Whatever nerve cells Yakunin lost as a result were more than compensated for by Putin the following day. The president said that Russia would invest 450 billion rubles ($13.6 billion) from the National Wealth Fund in infrastructure projects that could pay their way and would eventually invest up to half of that fund.

The president named three projects right away: the building of a high-speed railway between Moscow and Kazan, the Central Ring Highway and modernization of the Trans-Siberian Railway.

Yet Putin warned that the money would be allocated only for a time, and the main criterion for financing a project out of the National Wealth Fund would be the readiness of private capital to take part in it. So far, no private investors have evinced a desire to pitch in on the project.

Minister of Finance Anton Siluanov had his own reasons for sticking his head in the sand. Earlier in the week he had announced that the Ministry of Finance would begin buying currency on the domestic market in August, which would weaken the exchange rate by 1-2 rubles.

The ruble immediately plunged, providing the members of the forum with a rich topic for debate.

Elvira Nabiullina, who was appointed head of the Central Bank on June 23, said such speculations were inadmissible, because even “a hint at a possible weakening of the ruble rate has negative consequences.”

She was backed by the senior deputy governor of the Bank of Russia, Aleksei Ulyukayev, who explained that a weak ruble would by no means benefit all sectors of the economy.

The regulator’s words were illustrated by VTB. “These statements complicated our liquidity problem: The corporates, upon hearing about the weakening of the ruble, began to convert their deposits into dollars, which diminished ruble liquidity and increased currency liquidity, and things began happening,” VTB’s financial director, Gerbert Moos, told Prime Agency.

The stake on the Central Bank

Discussing the main topic at SPIEF – i.e., who is to blame for the lack of growth and what can be done to make it more tangible – the financial authorities showed a remarkable degree of unanimity in admitting that it was their fault.

“The main reason is that we dampened the impulse for growth we had in 2011–2012 by high interest rates, high tariffs and strengthening of the ruble,” said Minister of Economic Development Andrei Belousov.

In the opinion of the forum participants, Russia has only one way out: to stimulate investment. Deputy Minister of Economic Development Andrei Klepach said that the Central Bank had to cut rates immediately, because they are holding back the crediting of the economy.

If the proposed government measures to limit the tariffs of the monopolies work and price growth slows down, the Central Bank would be prepared to ease the squeeze; but the main priority for the Bank of Russia is inflation, said Nabiullina.

She hinted that banks had their own resources for cutting loan rates, such as cost cutting.

The battle for LNG

SPIEF brought long-awaited news for independent gas producers in Russia and shook the positions of the Russian gas monopoly. At present, Gazprom has the sole right to export gas.

The biggest independent gas producer NOVATEK and the petroleum giant Rosneft, which plans to increase production of LNG, asked the government to cancel the monopoly.

Addressing the plenary session, Putin supported them and declared that LNG export would be liberalized. While the government is preparing its decision, Rosneft lost no time and agreed on terms for LNG supplies with three companies.

The business part of the forum this year was highly productive: The participating companies signed 102 agreements to the tune of 9.6 trillion rubles (about $300 billion), Deputy Minister of Economic Development Sergei Belyakov stated after the end of SPIEF.

Rosneft also put itself on the map by signing an unprecedented $270-billion contract to supply oil to China.

Amnesty for the convicted

It came as a great surprise for the participants in SPIEF that the president approved of the economic amnesty, considering that, just a month earlier, Putin had been critical of its initial plan.

Putin seeks to develop economic ties with The Netherlands

The president set clear-cut limits to the amnesty: It would cover those convicted for the first time, who had compensated for or were ready to compensate for the damage caused.

The amnesty would cover only those who had committed crimes in the sphere of entrepreneurship, Putin explained.

The amnesty might apply to 5,000-6,000 persons, the first of whom could walk free this summer, Russia’s business ombudsman, Boris Titov, said. He noted that the amnesty might also apply to those who are under investigation – criminal charges would be dropped against tens of thousands of businessmen.