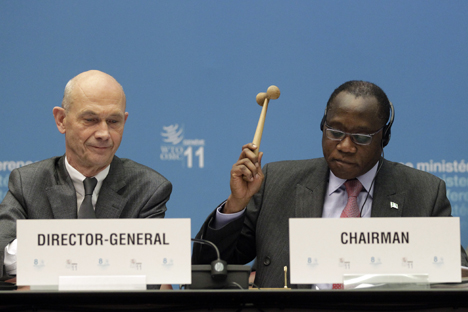 Conference Chairman Olusegun Olutoyin Aganga (R) uses a hammer next to WTO Director General Pascal Lamy to complete the accession of Russia to the WTO during the 8th WTO Ministerial Conference in Geneva, 2011. Source: Reuters

By comparison with other European countries, Russia remains attractive as a business and investment destination.

The Association of European Business (AEB) in Russia has presented the results of its annual research project — “Strategies and Perspectives of European Companies in Russia”—carried out in conjunction with GFK-Rus.

The research shows that Russia has lost some of its attractiveness as an investment prospect; the wave of optimism following in the wake of Russia joining the WTO has now fallen flat, and the change in government in 2012 does not automatically entail a relief from bureaucracy and corruption over the next two years.

However, according to general director of GFK Rus, Alexander Demidov, although the pace of growth in the Russian economy has slowed, if compared to crisis-ridden Europe, Russia remains an attractive market with large scope for further development.

Thus, 78 percent of companies who took part in the survey had seen their turnovers increase in 2012; this component had been 87 percent in 2011.

On the whole, companies taking part in the AEB survey predict economic growth, but they are showing less optimism than last year. For example, whereas 74 percent of managers talked about increasing investment in 2012, this year only 66 percent are putting their money where their mouth is.

“This year’s biggest disappointment” was Russia joining the WTO, according to the survey: Only 28 percent of respondents were feeling the positive effects of the WTO entry, although, a year earlier, 59 percent had said they were expecting positive changes because of it.

On the other hand, only 5 percent of companies thought the WTO membership was an actual negative step, while 8 percent expressed concerns that it might have been a bad thing—most companies (66 percent) thought the WTO entry had made no difference at all.

“The gates are opening gradually, and so changes connected to Russia’s WTO entry will not happen all at once. What we are seeing at the moment is a normal set of statistics [for this stage in the process],” says Alexei Evteev, president of BR Group-Russland.

Yet many are feeling the effects of the eurozone crisis: Fifty percent of respondents said the difficult economic situation had a negative impact on their business.

Researchers note one of the key factors to be the change in government. Whereas 65 percent were confident that Russia would remain an attractive place to do business last year, now 20 percent believe the country’s draw for business is weaker (only 8 percent of companies expected this in 2012).

“In terms of negative impact on foreign companies’ attitude toward Russia as a business prospect, I would say the presidential and parliamentary elections is top of the list—after the elections, conditions for doing business in Russia became harsher,” says Evteev.

There have also been positive changes. For example, if 40 percent of companies surveyed last year complained of the high interest rates on credit, this year the figure dropped to just 25 percent.

However, regulatory restrictions remain one of the most serious problems for foreign production in Russia (46 percent of respondents mentioned these), as well as the lack of qualified personnel (29 percent) and the unreliable nature of supply chains (21 percent).

“Despite the fact that Russia boasts a large, highly-qualified workforce, companies have to deal with a lack of staff resources qualified to work in a specialized field of production,” Demidov says.

According to experts, the problem is a significant one for many market players, and the companies themselves should become instrumental in preparing a specialized workforce.

The majority of AEB members do not foresee the situation improving when it comes to bureaucracy and corruption; fifty-six percent and 47 percent of companies, respectively, do not believe there will be any improvement at all over the next couple of years.

Russia and the W.T.O.: Equality without Fraternity

Despite falling 15 places to 144 out of 200 on the AEB-GFK index, researchers generally speak of a positive trend in comparison with last year.

“When you look at the impressive results of Q1 2012, the economic growth over the first three months of this year isn’t so significant,” says Stuart Lawson, executive director of Ernst & Young for Russia and the CIS. Lawson adds that, in the long-term perspective, the economy is developing according to a normal growth trajectory.

According to research, companies who have come to the Russian market tend to become profitable within 1-3 years.

Of the companies surveyed, 89 percent are planning to increase their turnover and another 72 percent plan to boost their profits over the next three years. In 2012, the corresponding figures were 84 percent and 77 percent, respectively.