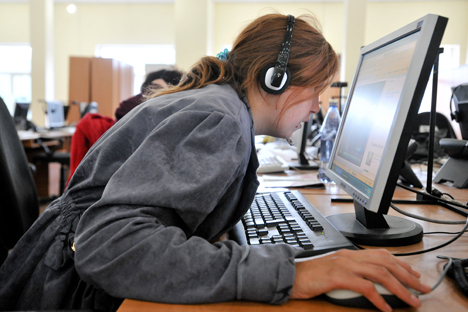 Russians spend 12.8 hours per month, on average, on social networks. This is the world record. Source: ITAR-TASS

Russians’ social media activity is costing the nation’s economy $10 billion — a lot of money, to be sure, but still just 1/65th of what America is losing annually.

According to eMarketer, the number of Russian social network users approached 51.8 million by the end of 2012, as Russia rose to the fifth place globally in terms of the size of its social media audience.

FBK, a consultancy, was quick to calculate that the need for a virtual communication fix could have cost the national economy between 281.7 billion and 311.5 billion rubles ($9.4–10.4 billion) last year.

While $10 billion is not an outrageous sum of money by Russia’s standards, it is still quite sizeable. For instance, it is comparable to the total spending on housing and utilities, culture, cinema, and the media (around $8.4 billion in 2012) or spending to support the transport sector ($9 billion).

That being said, Russia still has some room to grow when compared to similar estimates for the United States or Britain. According to various calculations, the American economy is losing up to $650 billion annually as a result of workers’ virtual social activity during business hours.

According to FBK calculations, active social network users working in the financial and real estate sectors, as well as in services, caused the biggest financial damage to their employers ($2 billion), followed by educators ($1.2 billion) and civil servants ($1.1 billion).

Unsurprisingly, the smallest losses were reported in industries where people work “on the ground” rather than in offices: Agriculture and forestry are losing less than 1 billion rubles ($30.3 million) a year.

“Employers have already realized the scale of the problem and are even taking certain steps. We can predict that they will have to intensify efforts to stop workers using social networks, particularly as raising productivity is still an urgent issue for the Russian economy,” said Igor Nikolaev, director of the FBK Strategic Analysis Institute. 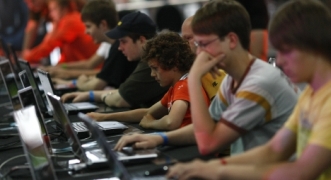 Darya Pichugina, an analyst for Investcafe, believes such estimates are rather approximate and tends not to exaggerate the actual economic fallout from employees’ social networking. She thinks smoke breaks must cause comparable losses.

“There are no definitive studies showing that social networks reduce productivity. On the contrary, it is common knowledge that workers should take a break every hour to improve efficiency,” the expert said.

According to ComScore, Russians spend 12.8 hours per month, on average, on social networks. This is the world record. The other top five virtual communicators include Israel (11.1 hours per month), Argentina (10.7), Turkey (10.2) and Chile (9.8). The global average is just 5.7 hours.

According to FBK estimates, every Russian worker active on social networks lost a total of 3,187.2 minutes, or 53.1 hours, of paid time in 2012.

Russia’s most popular social networks still include VKontakte (30 million users), Odnoklassniki.ru (26 million) and Moi Mir (23 million). The biggest global projects — Facebook and Twitter — have been catching on in Russia too, reaching 16 million and 5 million users, respectively.

Remarkably, the absolute majority of social network regulars are young people, and the average age of the virtual communication audience in Russia has been falling.

According to a study by the Kaspersky Laboratory, Russian children have already set the world record in time spent on social networks. Almost 60 percent are regular users, compared to the global average of 25 percent.

According to the Kaspersky Laboratory, the average Russian family owns between three and four Internet-capable devices, while 16 percent of households own every type of gadget: a desktop computer, a laptop, a smartphone and a tablet.

We can only assume that children who are used to spending a lot of time on social networks will contribute to economic losses from virtual activity once they join the workforce.