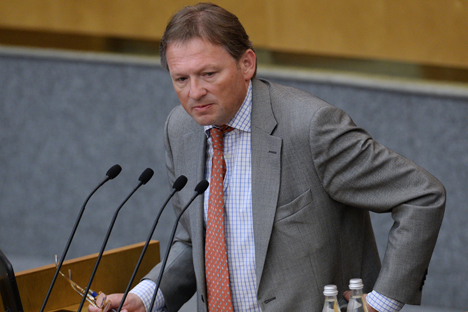 Business ombudsman, Boris Titov, has proposed an amnesty for businessmen guilty of economic crimes, on May 23. Source: Kommersant

It is unclear whether former Yukos heads Khodorkovsky and Lebedev will be pardoned as well.

In early July 2013, the lower chamber (State Duma) of the Russian parliament passed, in its final reading, a bill granting amnesty to criminals convicted of economic offenses.

Authorities plan to release first-time offenders convicted under the 27 articles of the Criminal Code of the Russian Federation that regulate entrepreneurship. The measure is expected to set up to 3,000 convicts free in the next six months.

A draft of the law was submitted to President Vladimir Putin by Business Ombudsman Boris Titov on May 23, 2013; the president, however, rejected the proposal as raw and asked for it to be finalized.

Specifically, Putin had not been satisfied with the possibility of the bill being interpreted to cover various categories of crime — from counterfeiting to illegal exports of materials used to produce weapons, etc.

The draft received a second wind a month later, during the St. Petersburg International Economic Forum, when Putin confirmed that he supported the new version, which had been cut almost in half.

The president urged the State Duma to give it prompt consideration before it broke for the summer.

The Duma deputies moved fast, and the bill submitted to the State Duma on June 25 was considered in three required readings in early July, within the span of one day.

Meanwhile, the changes to the bill were minor; in fact, the draft only lost one line, which said the amnesty could apply to people convicted of illegal banking activities (an offense committed by an organized group for the purpose of raising income in an especially large amount).

The bill otherwise remained intact, releasing entrepreneurs convicted for the first time from the remainder of their sentences (with the exception of cases where the punishment involved loss of the right to occupy certain posts or take up certain activities), with prosecution to be dropped against them, conditional upon repayment of damage or restitution for property by suspects or convicts.

The amnesty will apply to charges under 27 articles of the Criminal Code of Russia, including copyright infringement, illegal business practices, money laundering, tax evasion, default on debt service obligations, etc.

“Fraudulent Practices” (Articles 159.1 and 159.4) is one of the main articles under which the bulk of convicted businessmen will be set free. According to Garry Minkh, presidential envoy to the State Duma, the new law will release up to 3,000 convicts.

The bill will pave the way for releasing people who “were framed by their competitors rather than committed actual crimes,” says Sergei Markov, who is a member of the Public Chamber of Russia and an assistant professor of public policy in the department of philosophy at Moscow State University.

“It is commonly known that business competition in Russia often tends to work through prosecutor's offices, the Ministry of Internal Affairs, tax and customs officials, rather than by market means... This is precisely the category the bill suggests releasing,” Markov says.

Incidentally, it is still unclear whether the pardon will extend to former Yukos top managers Mikhail Khodorkovsky and Platon Lebedev. For one, the article (Article 160) under which Khodorkovsky was convicted was dropped from the original version of the bill.

“Second, he has been given another sentence; moreover, he admits neither his guilt nor the alleged damage caused,” Andrei Nazarov, vice president of the Delovaya Rossiya public organization, told RBC Daily.

Yet, even if the former Yukos owners had admitted their guilt, restitution might be problematical, considering that the damage is currently assessed at 17 billion rubles ($511.9 million).

Still, even Business Ombudsman Boris Titov has not ruled out that both Khodorkovsky and Lebedev might still be pardoned. A legal analysis would be required to investigate if conviction by two courts would take amnesty off the table.

Meanwhile, the draft is still very controversial in certain aspects, making it somewhat “ornamental.” Even the condition of restituting property and repaying damages appears to have more in common with a ransom than amnesty, the business community believes.

It also remains unclear what to do about innocent entrepreneurs convicted on trumped-up charges: Once they accept the amnesty, they de facto admit their guilt.

Based on materials from RBC Daily and RIA Novosti.

The bill suggests releasing criminals convicted on charges of infringement of copyright and related rights; violation of inventor's and patent rights; illegal enterprise; acquisition, storage and sale of unidentified goods; and illegal creation of a legal entity.

The amnesty also applies to first-time convicts on charges of money laundering or legalization of other criminal property; money laundering as a result of a criminal act; evasion of customs duties; bankruptcy fraud and abuse; tax evasion; and concealment of cash or assets of a company.