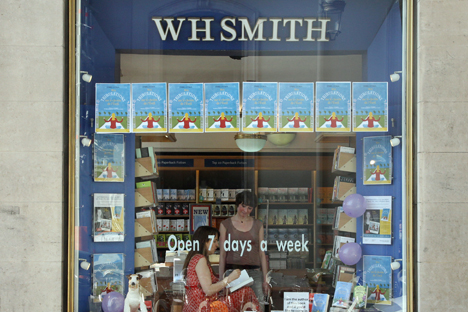 WHSmith has over 1,600 stores and kiosks operating at railway and bus stations, petrol stations and airports. Source: AFP / East news

UK retailer WHSmith has landed a contract to sell print media and related products at Russian Railways stations. The first store will open at Moscow’s Paveletsky Railway Station in July, with another 10 stores to appear in Moscow and other parts of Russia before the end of the year.

The UK retailer WHSmith, with annual sales at £1.2 billion ($1.8 billion), has landed a contract to sell print media and related products of the company Transmarket — a part of Russian Railways and a retail partner of the Railway Passenger Stations Directorate.

The first store will open at Moscow’s Paveletsky Railway Station as soon as July, with another 10 stores to appear in Moscow and other parts of Russia before the end of the year, Kommersant reported, quoting Zurab Mutiyev, head of Transmarket’s board of directors.

In the future, WHSmith stores will be opened at all Russian Railways stations.

According to sources at WHSmith’s headquarters, the company’s business in Russia will be based on franchising. Transmarket’s partner for this project is Tsvetnoi Bulvar, which has set up Tsvetnoi Bulvar Media to develop the WHSmith stores.

WHSmith has over 1,600 stores and kiosks operating at railway and bus stations, petrol stations and airports. The area of their outlets vary from 86 to 5,920 square feet on average, with some stores reaching 22,600 square feet; products include books, newspapers, magazines, stationery, etc.

Tsvetnoi Bulvar is part of Azerbaijan’s PNN Group, owned by Nizami and Nasib Piriyevs. Their core asset, the company AzMeCo, specializes in petrochemical operations and producing methanol on the Caspian Sea.

PNN is also a partner of De Beers and Hamley’s, which are opening their stores in Azerbaijan and Ukraine, as well as developing the franchise network of KFC restaurants. Last year, PNN considered the possibility of buying Moscow’s shopping center Tsvetnoi, but the transaction did not go through.

WHSmith’s Russian stores will be from 40 to 100 square meters (430 to 1,076 square feet) in size, according to Nasib Piriyev, a co-owner of Tsvetnoi Bulvar.

He estimates investment at £600–£1000 ($900–$1,500) per square meter. In addition to periodicals and books, WHSmith stores in Russia will also sell snacks, drinks and travel accessories. Piriyev describes the project as “having high administrative and legal risks, yet viable.”

Currently, periodicals at Russian Railways stations are sold by ARP Gudok, which is affiliated with the monopoly. According to Transmarket, this company will continue to operate. Piriyev believes he has no rivals in this chosen segment of the market.

Attempts by leading Western media sellers to set up independent businesses in Russia have all collapsed. In 2008, the French media group Lagardere sold its Russian chains — InMedio and Relay, 25 stores in all — to Finland’s Sanoma. Then, as early as 2010, Sanoma, which had its R-kiosk chain in Russia, also dropped plans for a distribution business in Russia.

In the process of opening WHSmith stores, a significant portion of the expenses will be rental costs, believes Marina Markova, a top consultant at Magazin Magazinov.

“The project does not envisage any significant investment in decoration and equipment,” she said in remark. Rental rates for stores of up to 50 square meters will range from 99,000 to 148,500 rubles (around $3,000–$4,500) per square meter, Markova estimates.

Vladimir Aleksandrovsky, head of client services at the trading space department of Jones Lang LaSalle, disagrees, arguing that market mechanisms in terms of rental hardly play any important role in this project.

“The prospects for WHSmith and other civilized retail businesses depend on the development strategy for the railway stations themselves,” says Aleksandrovsky. “Tenants should understand the environment in which they will operate, and such retailers will have difficulty operating until the railways become the territory of civilized retail trading.”