The war on traffic jams begins to pay off 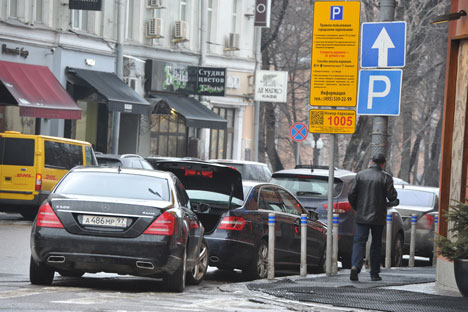 City officials insist, however, that the main idea behind the introduction of paid parking in Moscow is not to squeeze out “extra” profits, but rather to improve the transport situation in the city and make it more European. Source: PhotoXPress

It took a long time for Moscow to introduce paid parking in its city center—longer than almost every other major European city. Now that it has, the capital has raked in $757,500 in parking fees in the first month alone.

Starting June 1, anyone wanting to park their car in Moscow’s city center—that is, within the boundaries of the Boulevard Ring Road—has had to pay 50 rubles ($1.50) per hour for the privilege. According to estimates, the initiative has already brought in $757,500 to the city budget.

The first paid parking zones in Moscow appeared in November 2012, consisting of 558 spaces in the heart of the city, in the vicinity of Karetny and Petrovka streets. Six months later, the paid parking zone had been extended to the Boulevard Ring Road. People who live in the city center can park their cars for free overnight. Alternatively, they can pay $90 and park at any time during the day, all year round.

City officials insist, however, that the main idea behind the introduction of paid parking in Moscow is not to squeeze out “extra” profits, but rather to improve the transport situation in the city and make it more European.

The never-ending traffic jams in the Russian capital have long been the stuff of legend. As Alexander Shumsky, head of the Probok.net Moscow Center to Combat Traffic Jams, pointed out, there are currently 30 percent more motor vehicles on Moscow roads than the city can actually handle.

“This means that a third of all vehicles need to be removed from the roads,” he said. According to Shumsky, regulating the number of cars on the roads can be achieved in a number of ways, and the most effective ways are to raise the price of gas and introduce paid parking.

Authorities are counting on the fact that the $13 per day that commuters can expect to pay for parking will convince them to turn to public transport instead. Igor Kuznetsov, general director of the Moscow Parking Administration, has promised that the proceeds from the parking fees will be spent on improving the areas where the money was collected.

Drivers can pay for their parking via text message or at a parking meter (with a special parking card, or by debit card), and the $150 fine and towing should be ample deterrent from not paying.

The new initiative has garnered immediate results, with a 20–25 percent decrease (some 3,750–4,000 vehicles) in the number of cars within the Boulevard Ring Road. Paid parking spots are 60–80 percent full, and the average parking time has plummeted from between six and eight hours to between 50 and 90 minutes.

Motorists are against the new levies imposed by the authorities, however. “Unfortunately, the Moscow government has failed to explain to us exactly what we are paying for—the legal basis for paid parking is completely incomprehensible,” says Viktor Travin, head of the Collegium for the Protection of Car Owners’ Rights. “We are now paying 50 rubles to park on the street, in the exact same spot that it used to cost nothing.”

According to Travin, there is not one single parking lot that is suitably equipped, and, therefore, the safety of cars cannot be guaranteed. While he agrees that the number of vehicles in the city center has indeed dropped, this comes at a price—businesses lose money, and cafés, bars and shops suffer a dip in customers. “The most reasonable solution to the transport problems in our city,” says Travin, “is to move all the government officials out of the city center. We will immediately see the difference then.”

The initiative is not without its supporters, however—particularly those who are trying to fight the problem of traffic congestion in the city. Shumsky is quick to remind us that Moscow was the only remaining European city that did not have paid parking.

He believes that the paid parking zone should be extended right up to the Garden Ring Road and by metro stations that lie within the Third Ring Road. “This would result in the load on the most important part of the city—the center—being reduced significantly. The situation on the roads has already changed.”

Moscow parking prices do not differ greatly from those in the rest of Europe (see the table). According to experts, the $1.50 per hour fee has been chosen deliberately: It is a baseline fee that can be either increased or decreased in the future. They also warn that Moscow needs to have more privately built parking lots if it is to match European standards in terms of service.

The problem, however, as Yulia Nikulicheva, deputy director of Research at Jones Lang LaSalle, has pointed out, is that European governments, readily provide help to investors, as a rule. This could be in the form of tax breaks, co-financing or cheaper land. However, even with this kind of support, the payback period is usually somewhere in the region of 10 years. For Moscow, this is a long time; in Russia, five to six years is usually the norm. Hence, no one is interested in constructing privately built parking lots at the moment.