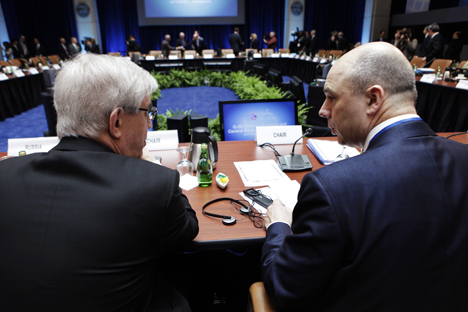 According to data from the World Bank, Russia's economy has jumped ahead of all the European nations, becoming the fifth largest worldwide in terms of GDP. Experts are confident that, in the future, the gap between the Russian Federation and the Old World will widen further.

According to data published by the World Bank in July, Russia is fighting the global economic crisis much more successfully than most developed countries. Based on GDP adjusted for purchasing power parity (PPP), Russia jumped ahead of all the EU nations in 2012, including Germany, which is number six in the world.

In addition, in early July, the World Bank shifted Russia to the group of countries with high national income per capita; for the last decade, Russia was in the category of upper middle income.

The ascent in the rankings will become a significant advantage for Russia's accession to the Organization for Economic Cooperation and Development (OECD), which is planned for 2015. To raise per capita GDP, OECD experts recommend increasing labor productivity, stimulating innovation, and implementing financial and tax regulation.

The success of Russia's economy does not surprise experts. According to Yaroslav Lissovolik, chief economist at Deutsche Bank, the ranking by GDP adjusted for PPP fully reflects the consumption of goods and services in the economy.

“The Russian economy is generating growth due to favorable oil prices, at a time when Europe is in a recession and its prospects for exiting this recession are not clear. The situation in southern Europe, which affects Germany and other countries, is particularly complicated.

Consequently, Russia is losing less from the current crisis than Europe is. Moreover, over the last year and a half, the ruble has shown decent results against a backdrop of decline on other developing markets,” Lissovolik said.

Dmitry Orlov, CEO of the Agency for Political and Economic Communications, also believes that Russia's place in the GDP rankings is completely justified. “Due to our problems, in terms of gross product and purchasing power, we are far from China but much higher than Europe,” he said.

So what is in store for the Russian economy in the future? This question is of great interest to average Russians, as well as to global investors, who are closely observing the country. Not long ago, the IMF lowered its forecast of Russia's growth in 2013 to 2.5 percent. The World Bank's forecast is only slightly lower—2.3 percent.

Incidentally, these figures look somewhat high, considering the GDP growth forecast for the United States (1.7 percent) and the eurozone recession (-0.6 percent). However, it is still the case that the economic growth of Russia’s two BRICS neighbors will, as previously, turn out to be more impressive than that of Russia (7.8 percent for China, 5.6 percent for India).

The experts questioned believe that, in the coming year, due to the stagnation of the eurozone, Russia's separation from Europe will only increase, and the country will significantly succumb to the Asian countries. “China and India will establish their positions in the GDP rankings,” said Orlov.

Lissovolik agrees with him, also noting that, despite the change in the World Bank rankings, the problem of insufficient economic growth in Russia still exists and is somewhat acute.