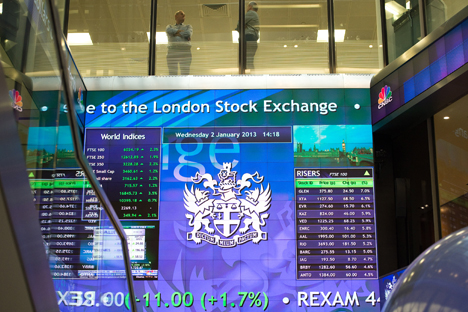 The highest barrier to the privatization of state-owned companies was a ban on the placement of their shares on foreign stock exchanges. Source: REUTERS / Paul Hackett

There is a new course of federal property privatization beginning in Russia, the beneficiaries of which will be top managers of privatized, state-owned companies. This time around, the budget revenues from the sale of state assets will be lower than planned.

In early July, Prime Minister Dmitry Medvedev signed a decree that marks the actual start of a new, three-year program of privatization of federal property.

The state also fully owns 1,795 federal state unitary enterprises. According to the approved program for 2014–2016, the plan is to privatize 436 companies and 514 federal state unitary enterprises. The government expects that, by 2016, it will complete the process of exiting non-oil sector companies that are not related to resource monopolies and the defense industry.

Most of the companies in which the state has a stake are concentrated in agriculture (225), construction (145), wholesale trade (123) and publishing (116).

In addition to small enterprises, the government plans to privatize more: In 2014–2016, the state should completely withdraw from the capital of Rostelecom, Rosspirtprom, RUSNANO and the United Grain Company.

By 2016, the government also plans to reduce state participation to 25 percent plus one share in the companies Aeroflot, Sovcomflot and Alrosa. In the case of diamond mining giant Alrosa, it is not just about reducing the package in the federal government, but also reducing the packet belonging to the Republic of Sakha (Yakutia).

This is perhaps the most ambitious privatization program since the 1990s.

Transfer of the company to private hands in the Russian system of governance does not mean a loss of state control.

"Property in Russia is conditional,” says the head of the National Strategy Institute, political scientist Stanislav Belkovsky. “And to change owners is not much more complicated than [changing] the state-appointed managers—just that it will require investigating authorities, prosecutor’s office and the courts.”

In 2008, on the eve of his inauguration, newly elected President Dmitry Medvedev said in an interview with Financial Times that the policy of privatization would continue under him.

Throughout the years of his presidency, there was talk of the need to reduce the state's share in the economy—but the share only increased. At first, the crisis was to blame, and authorities said that the government and state banks had to come to the rescue of the distressed private sector. Later on, the acute phase of the crisis passed, but the purchase of assets continued.

In the first half of 2013, the private company TNK-BP completed the purchase of state-owned company Rosneft, the state bank VTB bought the fourth-largest mobile operator Tele2 Russia, and the former’s subsidiary, VTB Capital, acquired a stake in Tricolor TV—the largest satellite TV provider in the country.

Yet the most revealing were the events of spring 2012. On May 21, newly approved Prime Minister Dmitry Medvedev instructed the government to speed up the privatization of state-owned companies, calling it a priority. The next day, President Vladimir Putin included Rosneft, RusHydro, FSK and Holding IDGC on a list of strategic enterprises, placing a de facto ban on their privatization.

Currently, Rosneft and RusHydro appear on the government’s new privatization list for 2014–2016.

The highest barrier to the privatization of state-owned companies was a ban on the placement of their shares on foreign stock exchanges. In October 2012, this patriotic initiative was created by the head of the now liquidated Federal Service for Financial Markets, Dmitry Pankin.

The idea has since caused confusion by its uneconomical character, but, in January 2013, at a meeting on the development of the stock market, Putin spoke about the introduction of the ban as a long-ago decided issue.

In February, the head of the Expert Department of the Presidential Executive Office, Kseniya Yudaeva, confirmed that all of this would happen and Russian state-owned companies would remain located within the country. Although, according to the same Expert Department, in 2010–2012, only 20 percent of the outstanding shares of domestic companies are accounted for by the Moscow Stock Exchange.

By imposing restrictions on the placement of state-owned companies on international markets, the government actually privatizes them on worse conditions and at a low price; the budget receives less revenue as a result.

Official explanations of the limitations on state-owned companies abroad cite the need to stimulate the development of the domestic stock market and the plans to turn Moscow into an international financial center.

Still, so far, the purpose of this seems so fantastic that it is hard take this as an explanation.