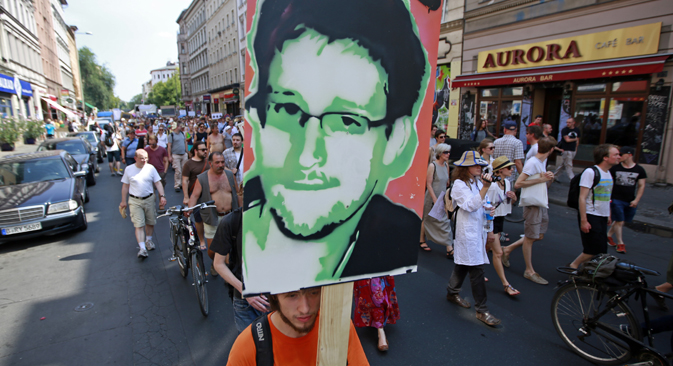 Entrepreneurs are trying to obtain the rights to use the image of the former CIA officer.

Russian businessmen have decided to register the image of former CIA officer Edward Snowden for patent. Experts believe this is an attempt to make a quick profit on a face that has been much-touted in the media.

This is actually part of a trend in Russia: Actors, TV personalities, athletes and politicians are turning to Rospatent and actively protecting copyright on the use of their name and likeness.

Rospatent simultaneously received three applications to register the image of a male face that is said to be “associated with the famous American technical assistant Edward Snowden.”

All of the images are based on pictures of Snowden that were widely disseminated by the media and on the Internet. In fact, all three trademarks were most likely copied from the frame of Snowden’s video interview with Britain’s “The Guardian.”

In one black-and-red picture, the former CIA officer is depicted with long hair to resemble Ernesto Che Guevara. A second picture is in black-and-white graphics, and a third picture (also black-and-white) shows Snowden in jail. The initiator of these applications is the publishing company Political Class.

The applicants do not say they are using Snowden’s face for the trademark; they note that the image is only "associated" with him. The patent companies, for their part, do not know if Snowden has actually agreed to become a brand. However, the consent of the infamous agent may not be necessary if the documents are corrected to indicate that the image is of a fictional character.

Ivan Bliznets, rector of the Russian State Academy of Intellectual Property, believes the applicants have made a not-quite-honest move, given the uncertain legal status of Snowden. Furthermore, without documentation, it will be difficult for them to assert their rights.

The creator of the famous "Putinka" brand of vodka, Stanislav Kaufman, explains that no one but Snowden can register the word "Snowden" — but the image is possible to patent.

“The desire of businessmen to make money on some media personalities is clear. If his portrait will be recognizable, Snowden may challenge in court its commercial use and has all chances to succeed,” says Kaufman.

According to the marketer, Russian businessmen will most likely try to make a quick profit off the famous debunker, while Snowden is still present in the Russian news.

"An artist can paint a picture of Snowden and register it as his work to use the way he likes — but that does not mean other artists will not be able to paint his portrait and use it,” says Kaufman.

Famous Russians began to actively patent their names and images almost three years ago. According to statistics, since 2011, more than 30 stars of the Russian Federation have submitted their applications for registration with Rospatent.

At the same time, their goals have been varied. Some, for example, do not want their names to be used by other people for commercial purposes, while others want to run their own business using their registered name.

The very first stars who wished to register their names were pop singer Philip Kirkorov and pop singer Alla Pugacheva. The wave of active patenting, however, started from the moment the name of world rhythmic gymnastics champion and Duma deputy Alina Kabaeva was registered in 2011.

Her example was followed by pop singers Timati, Alsou, Dmitry Bilan and Yulia Kovalchuk. Several spellings of the singer Zemfira’s name have been patented, as well as the name of former Russian secret services employee Anna Chapman.

Anna Chapman to reveal the “Secrets of the World”

Famous athletes also have patents of their own names. At the moment, trademarks are registered in Rospatent by soccer player Andrei Arshavin, boxer Dmitry Pirog and swimmer Vladimir Salnikov. In addition, there is a patent for a photo of the famous Soviet hockey player Valery Kharlamov.

Politicians are even turning to the patent office now. For example, Vladimir Zhirinovsky, head of the Liberal Democratic Party of Russia, has registered the right to his own name. This is, in fact, one of the oldest brands. Most of the images of Zhirinovsky may even be used by the politician in the manufacture of cigarettes and alcohol.

As the managing partner of the patent law office Soldatov and Partners, Eugene Soldatov explains that many famous people are patenting their names, or, at least their image.