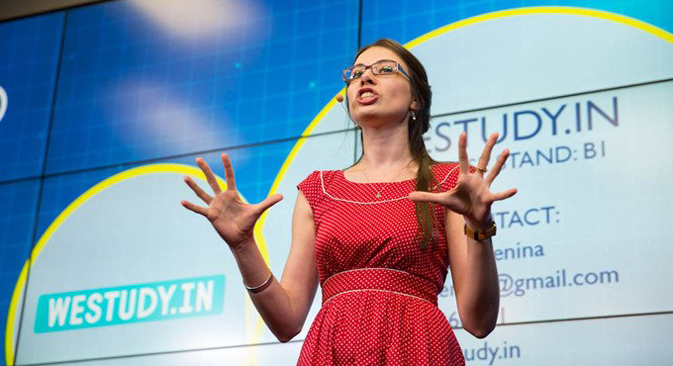 The WeStudyIn project unites more than 80 experts around the world who have had an independent educational experience abroad and who are prepared to share this experience. Source: Press Photo

By the time she was 25 years old, Aleksandra Olenina had already taught Russian in Britain, worked in Virginia through the Work & Travel program and had an internship at the UN headquarters in New York. The recent graduate of St. Petersburg State University founded the project WeStudyIn, which offers consultation services for those looking to study abroad.

Aleksandra Olenina has been accustomed to moving since childhood. She was born into a military family in St. Petersburg, grew up in Sochi where she also finished school, and then returned to St. Petersburg to study international relations at SPBU.

Olenina first traveled abroad during her third year of studies. After winning a contest, she went to Britain for four months to teach Russian in a private school for boys.

The school was located near oxford and her friends were mostly other Oxford student teachers. Her stay left an indelible impression, and she decided to do everything in her power to study abroad in the future.

“I started to search for conferences that paid you,” says Olenina. “I applied to them and started getting more and more successful applications.  Many people asked me how I did it.”

In the last four years, Olenina has finished a master’s program in St. Petersburg, interned at the UN headquarters, and also interned in Spain in the marketing division of Air Tractor, a dealer of firefighting airplanes.

In 2012, Olenina won a British Council contest and once again went to Britain to teach Russian as well as to do some research for her graduate project.

As people were ever increasingly asking her for advice about educational programs and offering her money in exchange, she began to think about how to systematize her consultations.

In 2011 she created a group on the social networking site Vkontakte with a few of her friends. A separate site was later created where young people who had studied abroad helped others gather and prepare documents for entry into foreign educational institutions. This idea was the basis of WeStudyIn.

Olenina has lived in Moscow since March. WeStudyIn’s office is located here in the business-incubator area of city center - “Red October.” Mikhail Frolkin, the founder of HeadHunter, has invested $300,000 in the project. Olenina plans to recoup the investment by the end of the next academic year.

The WeStudyIn project unites more than 80 experts around the world who have had an independent educational experience abroad and who are prepared to share this experience. Experts give consultation to clients online via video calls, edit necessary documents, and help students prepare for admission testing.

The cost of the service ranges from $55 (1,650 rubles) for an initial consultation lasting one hour to $1,650 (15,000 rubles) for step by step guidance, university selection, and help preparing applications.

“We show people where they might go to study, what kind of result they will obtain from it, and what professions they can choose. Our experts choose programs individually depending on the abilities, desires and background of the person,” says Olenina. “We comb all the universities for a given specialization and choose the one that is the best fit.”

To start, the client fills out a questionnaire which provides the expert with an idea about the applicant’s possibilities. The experts then tell the client what his or her chances are of entering into any given university, what needs to be done for it, and what the application procedure is like.

In extended work, an expert selects no less than five universities so that the chance of being accepted is significantly higher.

Leonid Godik, the 28 year old creative producer of the German online channel Mediakraft, is one of WeStudyIn’s experts.

Distance learning: Tackling the problem of education in rural Russia

He decided to join the WeStudyIn team after he saw an advertisement calling for experts in one of the social networking sites.

“I like sharing my experience and I can earn some money, plus one can ‘be seen’: In the company I work for, contacts are very important,” says Godik.

He himself is a graduate of the faculty of law at one of the best Russian educational institutions, MGIMO, was a fellow at DAAR (German Academic Exchange Service), and graduated from the production department at the Baden-Württemberg Film Academy.

“Personally, I sought an internship program in the USA for a long time. I wanted a short one with interesting content,” says another WeStudyIn expert, the 28 year old Vera Ageeva, head of the Saint Petersburg University of Service and Economics.

In 2012 she became one of the seven winners of a contest for participating in a one month internship program within the executive and legal branches of power in the USA.

“During my internship I was able to work side by side with American specialists. It was a unique experience,” says Ageeva.