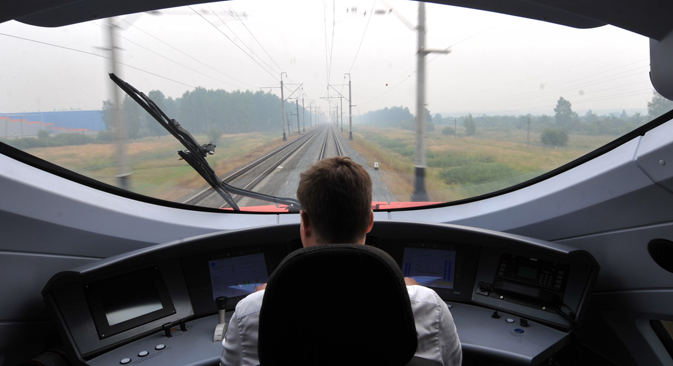 According to Russian Railways, in the first year of operation, the main line will be used by 7.5 million people. Source: ITAR-TASS

A new high-speed rail line will connect Moscow and Russia’s Muslim region of Tatarstan. The projected cost is $30 billion for the link, which will cut travel time to the 2018 FIFA World Cup site from 14 hours to 3.5 hours. Experts weigh the project’s potential economic costs and ecological side-effects.

The Kremlin has decided that the construction of a high-speed rail line from Moscow to Kazan will begin in 2015. The approximate cost of the project is 1 trillion rubles ($30 billion), and a ticket will cost an average of 4,000 rubles ($130). The project’s payback is not being discussed, but it would be cheaper to develop low-cost air transport in the area.

Vladimir Putin gave the green light for the plan to build the high-speed link. “I’d like to understand under what conditions and over what period financing is required, what will be done to attract private investors, how the invested money will be repaid, and the deadline for this repayment,” said Putin on July 31, opening a session on the issue of developing a fast rail connection.

The time frame for accomplishing the project may also be a topic of discussion. “This project is very long term — we need to proceed from reality,” the president said, calling for a resolution of these issues as soon as possible, in order to have time to designate budget expenditures on the project for next year.

Putin did not exclude the possibility of extending the main line from Kazan to Krasnoyarsk in the future.

Putin advised regional leaders to responsibly carry out the project, and to not create a frenzy in dividing up the land under construction. “I would very much like for this to occur without any crookery, so that no one starts feverishly buying up land now and then selling it to the government for triple the price,” said Putin, alluding to the inflation of land prices during the construction of the Olympic facilities in Sochi.

Laying fast or high-speed lines is another point of discussion. “We need to think about how doable and economically viable this is. Maybe we should limit ourselves to a fast line?” Putin asked, expressing doubts.

The branch to Kazan will be high-speed, Transportation Minister Maxim Sokolov announced after the meeting with the president. According to Russian Railways, a fast track generally has a speed of 90–125 miles per hour, while high-speed is between 125 and 250 miles per hour.

According to Russian Railways, in the first year of operation, the main line will be used by 7.5 million people. An economy-class ticket will likely cost 3,400 rubles ($109), while business-class tickets will run up to 6,000 rubles ($193). Travel time to Kazan will drop from 14 hours to 3.5 hours.

The project’s cost is estimated at 937 billion rubles ($30 billion), with a presumption that private investors will cover 30 percent and the government will cover 70 percent.

An allocation of 71 billion rubles ($2.3 billion) in subsidies from the budget is still needed (there are expenses through 2024) to service obligations and back the project’s non-operating profit. Sokolov stressed that the issue is not about ticket subsidies. In this aspect, the project is justified.

Infographics: Projects for speed and high-speed trains in Russia

The deficit from financing the project is estimated at 280 billion rubles ($9 billion).

“The sources of financing costs of around 279–280 billion rubles [$9 billion] have not yet been determined,” Sokolov said. They may be funds from the National Wealth Fund (NWF) or the state budget. “More than likely, it will be a combination of sources,” said the transportation minister.

The political decision to construct large-scale infrastructure projects (including the Central Ring Road, the high-speed rail link to Kazan, and the reconstruction of the Trans-Siberian Railway and Baikal-Amur Mainline) was announced by Putin at the St. Petersburg International Economic Forum in June.

A competition to design the high-speed rail line will be held in late September; the design will be completed in late 2014, and construction will start in 2015, to be completed in 2018, Sokolov said. The track will span more than 500 miles and pass through Noginsk, Orekhovo-Zuyevo, Kovrov, Vladimir, Dzerzhinsk, Nizhny Novgorod and Cheboksary.

According to Russian Railways, construction of the high-speed rail line to Kazan will spur the economy. The investment climate will improve, the employment rate will rise, and the regions’ integration will strengthen. However, ecologists say that specially preserved natural territories will suffer.

The authorities could find themselves at the receiving end of a scandal akin to the one related to the cutting down of the Khimki Forest. The construction of the high-speed rail line may affect the Volzhsko-Kamsky biosphere preserve — which is recognized by UNESCO as a clean-air preserve — as well as the Lebyazhe and Goluboe Ozero national parks.

If 1 trillion rubles ($30 billion) are adjusted for inflation and compared to 1984 prices, a figure of 8 billion Soviet rubles is arrived at; Zarifullin calculated that the auto giant KamAZ was built for 4 billion Soviet rubles, and the new city of Naberezhnye Chelny, which was built for 350,000 inhabitants, cost another 4 billion rubles to build.

“And all this in order to create an unprofitable enterprise in which, for a base transportation cost of around 4,000 rubles ($130), 2,000 rubles ($65) would be subsidized. The average person will not take the train for 4,000 rubles,” Zarifullin said.

The financing model of the Moscow-Kazan high-speed rail line in its current form looks unconvincing and is indirectly articulated, experts note. One thing is evident, however: In Europe, which is the example for the creation of this high-speed rail line, there is an objective need to create high-speed lines. “There is a high population density [in Europe], which you can’t say about Russia,” said Ibragim Botashev, a senior analyst at Solid.

Russia covers an immense territory, but when it comes to railroad speed, the European countries far surpass Russia — as do many developing countries, including China — said Andrei Kochetkov, an analyst at the Otkritie Brokerage House. “The speed of railway transport must be increased in all directions, not just to Kazan,” the expert said.

At best, the project’s profitability may reach 5 percent, as in Europe. It is unlikely that the profitability in Russia will be higher, considering the fact that prices for transport on the high-speed railway will be regulated by the government, said Daria Zhelannova, deputy head of global research at Alpari.

It would be cheaper to develop air transport and create conditions for low-cost airlines, experts note. “But, with the disappearance from Russia’s airspace of Avianova and Sky Express, it is still unclear if inexpensive carriers will appear,” said Sergey Kovzharov, an asset manager at AForex.

Aeroflot, Utair and Transaero have already publicized plans to launch low-cost programs, but low-cost lines will not bring big dividends to the economy. They can exist only as an alternative, Zhelannova noted.

Large-scale infrastructure projects often turn out to be “white elephants” — in business lingo, something big, beautiful and preposterous, but on which too much money is spent for the upkeep. An example is the bridge built to Russian Island in the city of Vladivostok, prior to the 2012 APEC summit. Construction of the bridge cost $1 billion.

“In England right now, there is a lot of dispute over whether or not to open a fast link between London and the western part of the country. The price of the question is several billion pounds. Proponents say that it will stimulate business if it’s possible to go from the capital to the western outskirts in a half hour. Opponents of the construction wave their arms and say: ‘A half hour, so what?’ Everywhere in the world there is strain from the appraisal of the efficiency of this sort of project,” Tatyana Orlova, senior economist at the Royal Bank of Scotland for Russia, the CIS and Israel said in an interview.