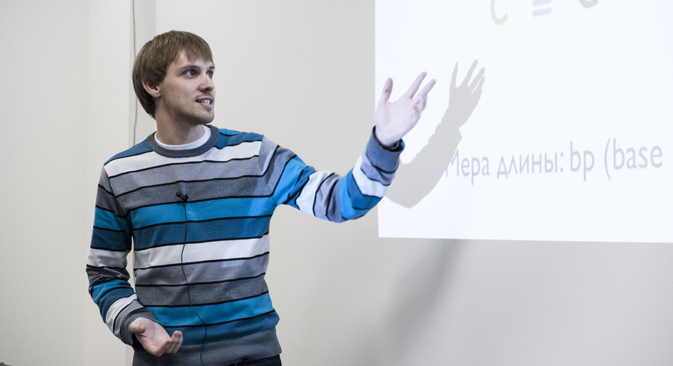 Nikolay Vyahhi himself teaches bioinformatics. It was while teaching that the idea of starting Rosalind came to him. Source: Press Photo

A team of Russian and American scientists are offering everyone an opportunity to explore a cutting-edge branch of modern science. Users around the world are giving the team’s unique project due credit.

In March 2012 the world followed James Cameron's dive to the deepest point on Earth: the bottom of the Mariana Trench. In addition to having set the world record reaching a depth of almost 11 kilometers, the Hollywood filmmaker brought unique deep-water bacteria samples to the surface.

Studies on the samples were conducted by specialists at the University of California, San Diego and Algorithmic Biology Lab at the St. Petersburg Academic University, headed by Nobel laureate Zhores Alferov.

This is not the only project on which San Diego and St. Petersburg scientists have worked together. Their cooperation began in 2011 under a 150 million-ruble (about $4.5 million USD) grant from the Russian government, whose aim was to draw a world-renowned scientist to Russia. The scientist that St. Petersburg Academic University collaborated with through this grant is Soviet émigré Pavel Pevzner, a UC San Diego professor and a leading bioinformatics specialist. He set up his own lab at the university in St. Petersburg.

In summer 2012 a team of specialists of the lab launched Rosalind, an educational project named after the mid-20th century British biophysicist Rosalind Franklin.

“The science about life is becoming a science about data – biologists need effective methods of data analysis so that they don't need to conduct thousands of experiments instead they can calculate everything on a computer or conduct just a few experiments,” says 27-year-old Nikolay Vyahhi, who co-founded the project.

Bioinformatics is at the forefront of modern science, and the practical importance of the research being done in this field is difficult to overestimate; it involves the reading of the genome to determine a person's predisposition to certain diseases, the search for new antibiotics, the development of biofuels and more.

Vyahhi himself teaches bioinformatics. It was while teaching that the idea of starting Rosalind came to him.

“I had a set of problems on a server and gave students the link to it. They opened it and solved the problems, and their answers were checked automatically, but the system itself was very awkward for the user,” Vyahhi says.

He decided to streamline the system and make it accessible to a wider range of users. The basic principle remains the same: a user processes a set of biological data with a computer code going step-by-step from simple to more complex problems.

One does not necessarily need to be well versed in biology and computer science to participate in the project – it is absolutely necessary to have an interest in these disciplines. Vyahhi says it is preferable that perhaps the only requirement for a user is to know maths at the high school level.

If a project participant does not know how to program, he or she is given a separate set of basic training problems to solve using the programming language Python, which, like any other, can be used to solve the project's main problems.

If the user is not sufficiently strong in biology, he or she can read an explanation of the problem and explaining its biological meaning. Definitions of many terms used on the website can be found in the glossary.

“Rosalind gives my mind a good mental workout, and helps me discover new ways to use different programming languages that I had previously thought were underpowered,” said David Eccles, a New Zealand based bioinformatics research analyst.

Distance learning: Tackling the problem of education in rural Russia

Each user is assigned a rating based on his or her total number of problems solved. Some 1,300 people are at level 0, meaning they have solved no more than one problem. The ten participants who have reached the seventh level, the highest so far, have each worked through 128 problems.

Problems are grouped according to their subject, such as heredity, dynamic programming, phylogeny, etc.  A user receives a badge for completing successive problems within a single group; solving five problems on combinatorics, for example, will get the user a first-level badge.

“With all its badges and achievements, it’s like a game,” says Natalia Ginsburg, a student at Physics and Mathematics Lyceum Number 30 in St. Petersburg.

Vyahhi and his colleagues are currently working on an idea for a new educational project for bioinformatics and related subjects, slated for launch later this year.