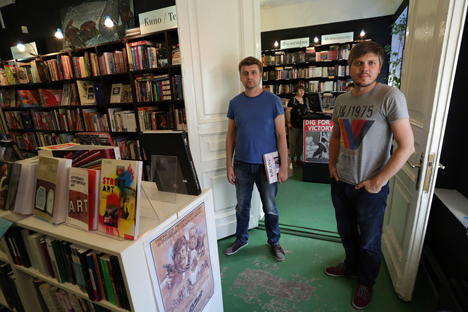 Most people suppose that big city is the best place for business. We found four stories of pioneers who set off from Moscow to start businesses in other Russian regions.

Denis Danilov is a native Muscovite who made his career in marketing and PR. He eventually grew tired of the corporate lifestyle in the latter half of the 2000s and downshifted. “My wife and I traveled for five years,” Danilov says. “We were able to live in India and Southeast Asia for a while, and we drove around Europe and Central America.”

Toward the end of his travels, Danilov began working on a new project: He realized he wanted to create a platform for making interactive videos.

At first, parts of the code and design were developed remotely from several countries. In early 2012, Danilov decided to assemble a team in one location and returned to Russia—albeit to Yekaterinburg, rather than Moscow.

“At some point it became clear that, in order to bring the project together, we would have to work as a single team and see each other [face-to-face]. I chose Yekaterinburg as the development center, because most of the project’s programmers live there,” he says.

Danilov says he has not regretted his decision for a minute: The city has plenty of good office buildings with low lease prices, and the city is an IT hotbed. “I have had as many as seven people working on the project at various times, each with salaries of 20,000–60,000 rubles [roughly $600–$1800, per month],” he says.

“I think that they would be making much more in Moscow. But they would, of course, be spending more, since Moscow takes everything it gives.”

Denis Korneyevsky came to Moscow in 2005, a few months after he graduated from Perm State University. He found work as a journalist in the capital. “Everything was going well: I liked Moscow, was earning a good salary, and had absolutely no reason to go back [to Perm],” he says. “Nonetheless, exactly three years later, I just quit. And I went back.”

Having worked in Moscow for a year-and-a-half as a manager in audio and video product sales, Korneyevsky’s future business partner, Mikhail Maltsev, returned to his hometown for different reasons. “My wife and I were expecting a baby, and, at some point, we decided that Perm would be a more low-key environment in which to raise a child,” says Maltsev.

Maltsev suggested to Korneyevsky that the two open an independent bookshop in Perm called Piotrowski. The business partners decided on a challenging business model: Piotrowski would only sell intellectual literature. The two have not brought in a considerable amount of income, of course, but they have not been incurring losses, either.

Their experience has them concerned, to a greater extent, not with low profitability, but with the fact that the number of fans of Brodsky and Nabokov is not growing.

“Screw it. Let’s do it,” young entrepreneur Vitaly Varikhanov energetically says, quoting Richard Branson. Last year, Varikhanov graduated from the law department of the Russian State University of Management and, after working in Moscow for several months, set off to start a business in his hometown of Vladikavkaz.

Having completed his university education, he wanted nothing more than to enter the world of business. His first attempts were in e-commerce. Varikhanov registered two online stores: Toysbrand, selling children’s toys, and AlpinaCrystal, selling Austrian jewelry. “They didn’t cost me much. Some friends helped me with the site itself, as well as with the design,” Varikhanov says.

“Including the cost of advertising, I spent 20,000 rubles [about $600] in total,” he says. “I took a classic approach: I would accumulate five orders on the site, purchase the goods at wholesale markets and distribution centers, and sell them with a mark-up.” In two months, the young entrepreneur had earned 60,000 rubles, or $1,800, and decided to move on and try something else.

“And then I went to an office exhibition in Moscow,” says Varikhanov.

“I met representatives from the firm Silwerhof, and they invited me to come see their shops in Germany, and I was drawn to the retail sales format.” He decided not to open a partner store in Moscow, as it would have required too much investment; conditions in Vladikavkaz proved to be more suitable. The store has just opened, but the young entrepreneur already has plenty of new plans. “I, for one, am interested in the tourism business,” he says. “I really want to organize a flow of tourists into Ossetia.”

“I am, in fact, local to a considerable degree. My ancestors lived in these parts near Kaluga during the time of Catherine the Great. They were of the German nobility, which came, at Catherine’s invitation, to develop these lands. And here I am, now... developing,” Koshmanov says.

Yet he did not begin developing Kaluga immediately: He simply came here from Moscow as a child to spend the summer with his grandmother. He later studied in Kaluga and became engaged in scientific work there. During the last year of his studies, Koshmanov and his friends started an engineering business in Moscow. He was completely occupied with the venture for several years, but now he hopes for a future in agriculture.

Since 2007, he has been buying up land shares in the farms around his grandmother’s village. So far, his land bank consists of 1,186 acres of private land and 494 acres of leased land. A few years after he started, the new farmer began to work the land, tilling and sowing. He has built apiaries and a poultry farm, and he is currently working on milk sheds, as well as the infrastructure necessary for eco-tourism.

“If I were to begin farming in a different area, it would obviously be worse. Maybe it’s the reputation as ‘the Russian Singapore’—that’s a bit much—but you really can do business in Kaluga,” Koshmanov says.