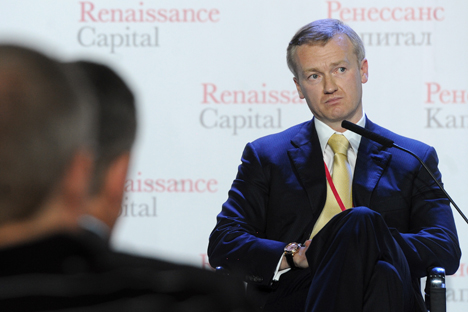 Vladislav Baumgertner: "We believe that, in 2014, demand for potash may grow by 10 percent to 60 million tons, and, in subsequent years, the market may begin to grow again by 3-4 percent". Source: ITAR-TASS

Director of the potash trader Uralkali Vladislav Baumgertner talks about the future of the industry to which he caused $20 billion in losses.

Last week, Uralkali General Director Vladislav Baumgertner announced that the company will no longer sell products through the Belarusian Potash Company (BKK, the only exporter of Russia’s private Uralkali and state-owned Belaruskali). Now, only Uralkali Trading will handle sales, and it will concentrate on product volumes instead of price, as it had before.

Until recently, the much consolidated potash industry has lived by the principle of "price before volume" — the small number of producers has allowed them, in most cases, to dictate terms to buyers.

Changing the sales policies of the industry's largest company has caused panic on the market. In just one day, the world's largest potash companies lost more than $20 billion in capitalization.

Experts and analysts noted the beginning of a new era for the industry. Why was it necessary to change the rules of the game, and why will the industry benefit from this? Baumgertner explained the answers to these questions in an interview with Vedomosti.

Vedomosti: How does a person feel who caused the market to lose $20 billion?

Vedomosti: Didn't your Canadian colleagues from Pоtаsh Corp. call you with the question, "What was that about?"

V.B.: Maybe they would like to have called, but there are regulations on such communication.

Vedomosti: Earlier you said that the market still had 5-6 years to live the way it always has, "price before volume." What changed, why did it all end so quickly?

V.B.: It was no secret that we had certain problems with our Belarusian partners. It became evident in the potash market in December of last year, when President Lukashenko made a decree that Belaruskali can sell products not only through BKK, but also through independent traders that are not affiliated with BKK and have not agreed to any volumes or price parameters. In fact, internal competition was created.

At first, it looked like the Belarusian side pressuring the Russian partner in order to obtain preferences in our internal negotiations, which have always been and always were working in nature. But, at some point, the market began to feel that behind the decree were real actions that the Belarusian side was going to take.

Perhaps in response to these actions was the unexpected signing by Cаnpоtex [trader of Canadian Pоtаsh Corp., American Mosaic, and Agrium] of a contract with Chinese companies in December 2012.

I cannot say exactly, but I think that behind this irrational step were fears that BKK was on the brink of collapse, and therefore Cаnpоtex decided to act first. Then we were able to keep control of the situation: Stockholders met with the country's leadership; management met with the prime minister [Mikhail Myasnikovich] and with the representatives of the owner of Belneftekhima, which owns Belaruskali.

Vedomosti: Why is bypassing BKK to ship potash having such a negative impact? They offered prices that are too low?

V.B.: The question is not about low prices, the question is the single trade position. When there is one leading provider, then it is possible to take an extremely rigid negotiating position, and buyers cannot sever producers, set up bidding, etc.

Vedomosti: Did you expect such an extreme reaction? Analysts called this day the Black Tuesday of the potash industry.

V.B.: We do not believe the reaction of the market was so strong or inappropriate. Yes, it all happened fairly quickly. It is clear that investors were supposed to react in such a manner, because now the potash world has substantially changed.

And, today, we find ourselves in a situation where it is important to pay attention to the costs of production: Marginal producers should feel the natural market pressures.

The fact that this all happened in one day, I think, is unpleasant, but we couldn't have behaved differently. We aren't large enough to implement a strategy of "price above volume," therefore there was no economic logic in this. That means it was necessary to maximize earnings another way, and this way is by maximizing volumes.

The next question is: What will happen with the prices? The price trend is evident. If the volumes increase, the prices may go to production cost of marginal producers—that is, about $250 for one ton.

Vedomosti: What will the potash market look like after July 30th?

V.B.: For now we can speak only about the short term — six months to one year. The Cаnpоtex group will probably survive, but perhaps with a different strategy. Belaruskali will be an independent player that will attempt to trade actively through independent traders. There will be K+S and ICL, who will work as they always worked.

And there will be the independent Uralkali, with a new strategy of selling as much as possible on all of the markets. We anticipate that all will suffer financial losses: We will see lower profits; we will see marginal manufacturers consider what to do next; but, in the short term, nothing will happen.

Uralkali can increase production up to 14 million tons and will work several years at this level. The remaining expansion projects will be postponed. But this will be a great breakthrough. In fact, we actually will increase production by 30-40 percent. This will help compensate for the decline in revenues from falling prices.

We believe that, in 2014, demand for potash may grow by 10 percent to 60 million tons, and, in subsequent years, the market may begin to grow again by 3-4 percent. This will help to stabilize the market in the medium term. Most Greenfield projects will die, someone from the existing players will die too, and demand will simply increase.

This is a recovery of the market. I do not dare to say that we did it because we deeply desired to. We were forced to do it based on the situation in Belarus. But since it all happened this way, we saw a great number of advantages that we are going to hold on to with all our strength.

First oublished in Russian in Vedomosti.