G20 leaders say yes to investment, no to tax evasion 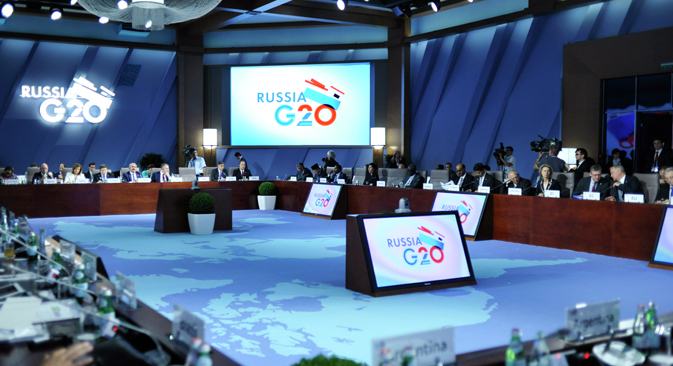 As the current Chair of the G20, Russia is focusing its attention on to the need to increase investment to spur a global recovery. Source: Press Photo

The forthcoming G20 summit in St. Petersburg hopes to map out a solution to one of the forum’s main tasks: The stimulation of economic growth. As the host country, Russia will place investment procurement at the top of the agenda.

As the St Petersburg authorities put the finishing touches to a new highway built to welcome the G20 participants and promise to deal with illegal migrants — and against the backdrop of U.S. President Barack Obama’s decision to cancel his face-to-face meeting with Russian president Vladimir Putin — the world's leading politicians are readying themselves for the forum, scheduled for  September 5-6.

The tone of the summit has already been set by the G20 Finance Ministers and Central Bank Deputies' Meeting, held in late July in Moscow. In their final communiqué, the participating finance ministers outlined action plans according to three main goals: examining ways to increase long-term investments; combating tax evasion, and, most importantly, promoting growth in the world economy.

The latter was the main object of the St. Petersburg Plan of Action, which will be finalized by September and submitted for consideration at the summit. This comprehensive plan, as stated in the communiqué, is intended to stimulate growth through job creation.

A key topic of the summit will be the economic slowdown currently affecting not only recession-scarred Europe and the underemployment-hit U.S., but also developing countries, whose GDP growth rates have slowed markedly.

"The focus of the summit will be the slowdown in the world's leading developing economies observed over the past few years. Partly it is the result of cyclical processes, and partly a lack of structural reforms," states Nariman Beravesh, chief expert on macroeconomics at IHS Global Insight.

In July, the IMF cut its global growth forecast for the year from 3.3 to 3.1 percent. The figure for developed countries remained unchanged at a paltry 1.2 percent, while the picture painted by the IMF for developing countries was somewhat gloomier.

In July, the country's Purchasing Managers Index (PMI) not only fell (for the first time since August 2011), but was down to below 50 points — the lowest level since December 2009. That followed pessimistic appraisals for the Russian economy from the IMF and the World Bank, which lowered their forecasts for GDP growth in 2013 to 2.5 percent and 2.3 percent, respectively.

Related: The ‘reset’ button is broken

As the current Chair of the G20, Russia is focusing its attention on to the need to increase investment to spur a global recovery. "Overall, economic recovery comprises two major tasks: how to kickstart the investment process, which drives development, and how to reduce risk through building an international financial architecture and correcting for imbalances that could lead to a new crisis," the head of the Economic Expert Group Evsei Gurvich points out.

According to Yaroslav Lisovolik, chief economist at Deutsche Bank, a core challenge for the G20 is the creation of institutions to manage investments. The opinion is shared by economist Dmitri Polevoy of ING Bank, who believes that greater control is required to ensure that investments are effective, to be supplemented by changes in government policies to support investors.

Another crucial issue to be discussed at the G20 is the "de-offshoring" of the global economy, including coordinated measures to combat tax evasion. According to Lisovolik, "It is imperative that all countries play ball, and do not seek to channel financial flows."

The fight against tax evasion is closely linked to anti-corruption policy, which is also on the agenda of the upcoming summit. The plan — initiated under Russia's presidency and set for further development after the handover to Australia — provides for coordinated action to ensure the independence of anti-corruption agencies, introduces measures to tackle money laundering and the proceeds of corrupt activity, and imposes restrictions on the movement of public officials found guilty of corruption. Politicians expect the business community not to remain on the sidelines.

In addition, Russia has "inherited" other issues from previous G20 meetings that will not escape the attention of the world's top politicians. The ongoing reform of the international financial architecture and financial regulation is of particular importance in this respect.

For instance, the revision of IMF quotas in favor of developing countries was approved by the G20 back in 2010, but the reform has since stalled, causing anxiety chiefly among BRICS countries.

On a more positive note, the heated debates witnessed in 2011 and 2012 over the "currency wars" appear to have lost their edge. Prior to Moscow's presidency of the G20, universal fears had been stoked by the standoff between China and the U.S., as well as Brazil's exchange rate interventions.

But the lack of criticism at previous G20 summits over Japan's easing of monetary policy, which has significantly weakened the yen, effectively sanctioned the use of loose monetary policy by central banks everywhere to achieve the main objective of stimulating economic growth.