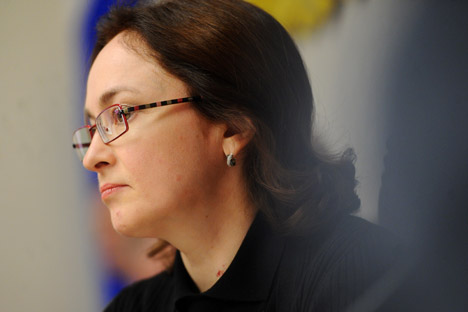 The Central Bank says that economic modernisation is key to speeding up growth in the mid-term. Source: ITAR-TASS

The Central Bank of Russia is pessimistic about prospects for economic growth, and expects the GDP growth to stall at around 2 percent by the end of the year. Experts concur and suggest a quick intervention to prevent a crisis.

By the end of 2013, the Russian economy will grow by a mere 2 percent. Growth rates could pick up gradually in 2014 but will most likely not show any significant boost. This is the Central Bank’s assessment of the economic development prospects as set out in its quarterly monetary policy report.

In spring the Ministry of Economic Development cut its 2013 forecast growth rate from 3.6 to 2.4 percent, and in 2014-2015 an increase in growth rates at 3,7 and 4,2 percent correspondingly is to be expected. However, the slowdown in GDP growth in the 2nd quarter ‒ from 1.6 percent in the first quarter to 1.2 percent (year-on-year from 2012) ‒ questions even the downgraded forecast for 2013.

According to the calculations provided by Nikolay Kondrashov of the Centre for Development at Higher School of Economics, the half-year economic growth reached 1.4 percent, and with the seasonal discount the second quarter growth against the January-March period was only 0.1 percent.

The Central Bank was the first to officially recognise that the Ministry of Economic Development was being over-optimistic in its estimates. In the second half of 2013 the ministry expects a higher growth rate due to the base effect (investment, budget spending, agricultural output growth).

But even this does not bring the growth rate to match the annual forecast, as Oleg Zasov, Department Director at Ministry of Economic Development, admitted earlier. The regulator will present a revised forecast before September.

According to HSBC’s Alexander Morozov, data from the first two quarters alone takes about 0.5 percent off of annual growth. He believes that the 2.4 percent forecast is only possible given good harvest and a favourable environment at large.

However, the Central Bank remarks that one shouldn’t count on the latter, since developed economies are currently experiencing overproduction of many goods at poor overall growth rates.

A “New KGB” (Comments on the state and business) bulletin recently released by the Higher School of Economics argues that the Ministry’s plans to reach the 2.4 percent growth bar can be forgotten.

To make it happen, the growth rate would have to soar from 0.9 percent in the first six months of the year (year-on-year) to 6.5-7 percent in the second half, i.e. almost to the pre-crisis level (see graph). However, the report authors state that the factors normally retaining growth are strong: slower consumer crediting, increasing unemployment, decreasing economic profitability.

A senior official at the Ministry of Finance observes that the positive growth rate trend for 2014-2015 does not look well-founded either. The Audit Chamber points out that, against the expected drop in investment in the oil, energy, gas and railways industries, there is scarce foundation to trust such growth forecasts.

The Central Bank says that economic modernisation is key to speeding up growth in the mid-term. Investment and growth stagnation in the first six months of the year were set against high employment rates and manufacturing capacity use (potential and actual outputs almost meet, see graph). This means that boosting capacity won’t help increase growth.

Morozov points out that this is the first time the Central Bank is attempting to speak out not only on monetary policy issues but on institutional matters. He argues that the institution makes a valid point about modernization, but capacity is hardly at maximum and something must be done quickly to solve the situation: “Otherwise we’re in stagnation by default”.

Vladimir Tikhomirov of FC “Otkrytie” adds that the monetary levers for growth stimulation are limited since the dynamics of inflation are not positive and the plans for its retention are too optimistic.

There are no fundamental factors for significant economic growth increase, but one-off measures could bear some results ‒ for instance, allocating some funds for infrastructure projects from the National Welfare Fund. “These measures should be taken as soon as possible,” he says.

A senior official at the Ministry of Finance remarks that it’s not just about growth rates, but also about its qualitative characteristics: “We could boost growth by unsealing the reserves and could reach the 5 percent rate but when we run out of money, this growth will end up in a collapse”.