Will Lada's joint venture with Renault-Nissan save Russia's car industry? 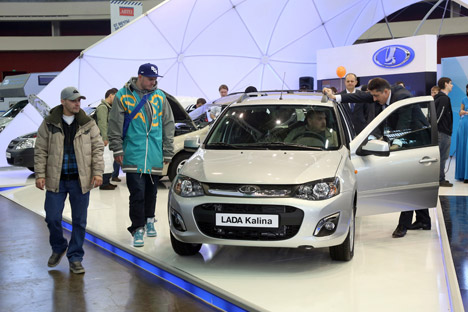 Experts believe Lada may be the best-known Russian brand outside of the country. Source: PhotoXPress

Russian-branded cars will soon regain their international roots with a debut in Western Europe following a painstaking modernization by partners Renault-Nissan.

“My friend had one which I liked so much, I just had to have one of my own,” says Neil Chowney of Winchester in the U.K., illustrating the devotion Lada owners around the world have for their vehicles. That was seven years ago. Now Mr. Chowney has two Ladas - a 1.7-liter fuel injection Niva off-roader and a 1.5-liter Riva four-door saloon.

“What I like the most about them is their rugged simplicity,” says Mr. Chowney, who for the past three years has been running a business importing spare parts for the cars. “You can fix them at the side of the road without any special tools.”

And he really enjoys taking his Niva - also sold as the 4x4, Bognor Diva, Job, Taiga, Sport, Bushman and VAZ-2121 in various markets world-wide - off-road. “It may not be very fast but it’s very good off-road,” says Mr. Chowney.

While Lada may be the best-known marque outside of the country, Russian car making stretches back to Tsarist times when vehicles based on German designs were hand-produced in Riga in modern-day Latvia.

The first mass-produced autos, however, were licensed versions of Ford’s A-model made at the GAZ factory in Nizhny Novgorod in 1929. Over 40,000 GAZ-As and GAZ-AAs were made until World War II required that the plant switch entirely to military production of trucks and jeeps.

“Initially the USSR didn’t have its own automobile technology or specialists,” explains Oleg Afanasyev of leading Russian truckmaker KAMAZ. “It was a question of spending 10-15 years developing its own models and remain technologically far behind world leaders, or use foreign technology to set up production locally.”

After World War II, car production really took off powered by an economic boom and expansion of the middle class, with the Soviet government once again relying on Western technology to manufacture a car for the masses.

In 1967, the year of its launch, the “Classic” took the European Automobile of the Year award and  by the time production stopped last year, some 20 million had been sold.

Togliatti: A city shaped by cars, mountains and Italian Communist

For mainly domestic sale, GAZ also produced the Volga passenger car, the Chaika limousine (for the Communist Party elite) and the Moskvitch passenger car, manufactured in the cities of Izhevsk and Moscow when the Soviet Union acquired an entire Opel manufacturing line from Germany after World War II.

By 1985 the Soviet Union was producing over two million vehicles (including 1.2 million passenger cars) annually, making it the fifth largest producer in the world.

The fall of the Soviet Union and subsequent economic decline hit the country’s automobile industry hard: among passenger cars, only Togliatti-based Lada sedans and Ulyanovsk-based UAZ off-roaders and SUVs survived for any length of time.

Sales of new cars under Russian brand names dropped to 580,000 last year from a peak of 920,000 in 2002. Lada still sells the top three most popular passenger models in the country, however: the Priora, Granta, and Kalina, according to the Association of European Businesses.

To boost flagging prospects, local companies have again turned abroad for assistance, with alliances like Ford-Sollers and Renault-Nissan-VAZ. And this in turn, at the same time as offering foreign players improved access to the Russian market is providing the opportunity to revive exports of Russian-made vehicles.

The demands of export markets are pushing up standards, says Alexander Shmygov, head of VAZ’s press service. “European customers have higher demand for design and other criteria, which pushes us to develop safer and cleaner cars. The cars all meet the Euro-5 ecological standard.”

Andrei Beryukov, head of Yo-Avto, Russia’s first producer of hybrid cars scheduled to debut next year, believes that news of the modernization carried out by Renault-Nissan at the Lada plant has already revived foreign interest in Russian-made cars. Yo-Avto is also in negotiations to export the company’s first model in the coming years, he adds.

It may no longer be being made but the enthusiasm for the “Classic” Lada shows no sign of diminishing. CA quick search of the Internet reveals clubs of like-minded enthusiasts across the globe . And they all still appear to be having a lot of fun.