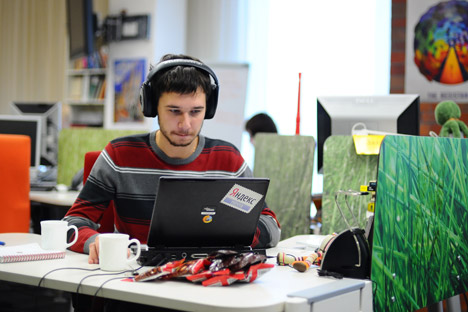 The Internet-inflation index uses data from Yandex.Market, which gathers information from the majority of Russian online stores. Source: ITAR-TASS

An Internet-inflation index has come online in Russia, enabling users to monitor price fluctuations for the most popular goods in web stores. Yandex, the Higher School of Economics and Interfax are the forces behind this new index.

Representatives of the software developers told Vedomosti that the Internet-inflation index was developed by Interfax, Yandex.Market and the Higher School of Economics. The index uses data from Yandex.Market, which gathers information from the majority of Russian online retail businesses—13,000 Internet stores—for its calculations.

This model for calculating inflation was developed by specialists at the Higher School of Economics in Moscow. It uses information on user transactions from Yandex.Market to online stores: the items purchased, the average price for the week, the total number of transactions per week, and the total demand price of an individual item.

Rosstat is also tracking prices for the majority of these goods in traditional shops. According to Rosstat’s data, for example, between the beginning of 2013 and the onset of fall, cameras have reduced in price by 0.7 percent, notebook prices have fallen by 1.5 percent, and prices for mobiles have decreased 1.4 percent.

The price index for Internet stores has recorded more significant fluctuations: Digital cameras have decreased in price by 2 percent, notebooks by 2.5 percent and mobile phones by 2.6 percent. “We are certain that our data is more representative, since Yandex.Market only collects information concerning certain types of goods,” says Alexander Kiyatkin, the editor of the Internet projects service at Interfax.

Three years ago, Google announced that it was developing the so-called Google Price Index. It was proposed that this would be quicker than using state statistics to obtain and update economic data with constantly updated data from Internet stores in the United States and Britain. Public data on the design procedure or the significance of the index was never disclosed.

Kiyatkin says that the list of categories used to calculate the index will be expanded, in the near future, to include new categories for technical and everyday products and household goods. According to the editor, the developers are also holding talks with food retailers, in order to monitor price fluctuations on food items on the Internet.

Anton Panteleyev of M.Video thinks that online trade itself has made the price formation process transparent. The customer can see price fluctuations for a range of products among different vendors.

“The launch of a specialized index makes the process clearer and more public. In fact, it takes price formation to the Internet, making it possible to track price fluctuations and predict consumer demand in one category or another,” he says.

Igor Polyakov, the leading economist at the Center for Macroeconomics and Short-term Forecasting, notes that, for economists, data from the Internet-inflation index could be useful for clearly showing fluctuations in consumer demand in situations such as the one experienced at the end of 2008. Expecting a devaluation of the ruble, Russians actively spent their money on everyday products and electronics.

“Economists had no data on how spikes in demand were distributed across a number of weeks,” says Polyakov. The expert adds that, in order to use the Internet-inflation index to build macroeconomic models and forecasts, at least two years’ worth of data is required. According to its developers, the index is calculated retrospectively, starting from July 2012.