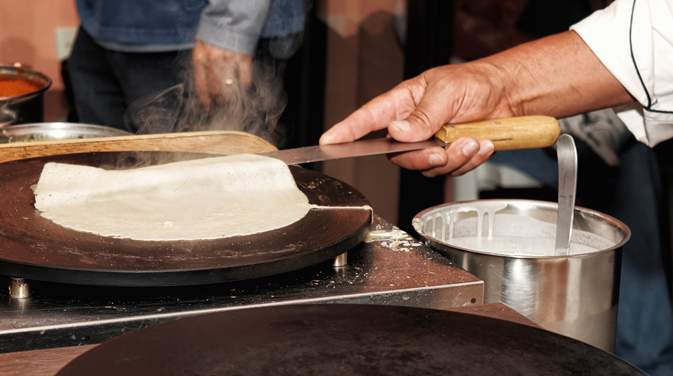 Teremok is looking for locations in shopping areas and near offices in the U.S. Source: Shutterstock

The popular Russian blini chain Teremok will open its first restaurant in New York by the end of 2014. However, American experts say Russian fast food won’t have an easy time of it.

While working on a detailed plan for development in Russia’s regions some time ago, Mikhail Goncharov, the owner of the Russian fast food chain Teremok, came up with the idea of taking the brand west, to America. That idea is now on the brink of becoming a reality. According to Goncharov, the first two outlets are expected to open in New York later this year, and the company is currently preparing the necessary documentation.

Teremok began planning for international expansion last year, and Goncharov has already made three trips to the States to speak with lawyers and scout locations. Now that plans to enter the foreign market are nearing fruition, Goncharov is preparing to go about the business of registering the company in the U.S., translating standards and recipes into English, and locally sourcing equipment and ingredients.

According to the Teremok owner, any decisions regarding further expansion into this new market will depend on how the first two restaurants fare. Goncharov has no plans to make any significant changes to the menu for the U.S. market, arguing that consumers will vote with their dollars on whether they like the new concept and product or not. The greatest outlay for the venture will be the cost of renting premises for the outlets.

The expense involved in opening each outlet will be approximately the same as in Russia. Goncharov estimates that the cost will be 5 million rubles (about $140,000), with 3.5-4.5 million rubles spent on the café itself. “For example, food warming equipment is universal,” says Goncharov. In the U.S., new companies have to pay a 12-month deposit for rent (with exceptions made only for major foreign companies). As in Russia, Teremok is looking for locations in shopping areas and near offices in the U.S.

Andrei Petrakov, the executive director of restaurant consulting firm Restkon, agrees with the estimate. “Moscow is a very expensive city for restaurants, and perhaps in New York some costs will be lower; building materials, for example. Blini with filling are less international dishes than burgers or pizza, but they aren’t as common and are somehow considered exotically Russian. Consequently, we don’t need to make any serious changes to the image or menu. Start off as it is, and then fine tune according to the response from the market,” advises Petrakov.

Michael Schaefer,head of Beverages and Foodservice at the Chicago office of Euromonitor International, says that a challenge for Teremok will be the fact that in the U.S., even in New York, few people are familiar with Russian cuisine. “Even though pancakes are easy to find in major American cities, they were never popular in the fast food segment and I don’t think blini will succeed in quickly changing that situation. Back home in Russia, Teremok’s success is based on consumer commitment and accessibility. In New York, particularly in Manhattan and Brooklyn, consumers won’t be particularly impressed or surprised by what Teremok has to offer.” Schaefer believes that it will be challenging for the brand to gain popularity in America without an unusual concept and a good social media marketing campaign.