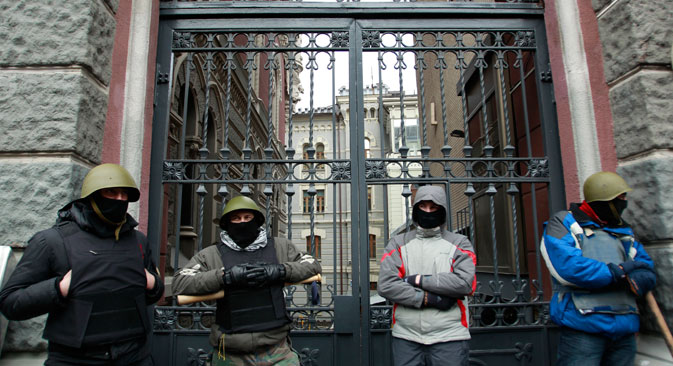 Of all the Russian companies operating in Ukraine, banks have so far been the most affected. Source: Reuters

Many Russian firms operating in Ukraine are reporting business as usual while keeping a close watch on their operations.

Russia’s close economic ties to Ukraine means that several major Russian firms stand to suffer as a result of that country’s political instability.

Speaking at a conference in Berlin, Russian Economic Development Minister Alexei Ulyukayev said that it was clear that Ukraine’s GDP would contract. “It is clear that the country's foreign trade will also suffer. That will obviously have an impact on the Russian companies that operate in Ukraine," Ulyukayev said.

Russia’s association with Ukraine in the eyes of foreign investor has also affected capital outflow in Russia itself. The net outflow of funds working in Russia reached $116 million dollars in the week of Feb. 12-19, up from $53 million the week before. Market players blame the situation on the threat of a "significant deterioration of the investment climate" due to problems in a “large neighboring state” as well as the Ukrainian exposure of Russian businesses.

Two of Russia’s big three mobile operators, MTS and Vimpelcom, have operations in Ukraine. They have reported peak loads on their networks due to record volumes of voice traffic in parts of the country. On the whole, however, they report business as usual. The only serious incident to the telecoms network happened in Kiev, where a major blaze in a building on Independence Square (Maidan), the epicenter of the protests, damaged a $50,000 mobile base station. Both MTS and Vimpelcom have closed their retail outlets in central Kiev until the crisis is over.

The Russian search giant Yandex also says there has been no disruption to its operations, even though its Ukrainian headquarters is in central Kiev. The company allowed its staff to worked from home for several days while the Kiev subway system was down. Yandex has said, however, that there has been a major shift in its traffic patterns, from general search traffic to search queries on the latest news.

Airlines haven’t fared as well, however. Russia’s largest carriers, including Aeroflot, Transaero and S7, have imposed restrictions on ticket sales via Ukrainian travel agents owing to a rapid depreciation of Ukraine’s currency, the hryvnya.

Several Russian steel and mining giants, including Evraz, Mechel, and Severstal, have major industrial assets in Ukraine. Evraz said that its operations in Ukraine have not been affected by the political situation, but added in a statement "there may be some difficulties with payments from partners and customers." Mechel has declined to comment, but sources say that political instability has forced the company to suspend talks about selling one of its facilities in Ukraine.

Gas monopoly Gazprom has said there have been no problems with gas transit via Ukraine, but the company declined to comment on the issue of Ukrainian debt for gas supplies. The latest payment from Ukraine arrived on Feb. 17, when Kiev paid $1.28 billion dollars to clear half of the outstanding debt for 2013 and $191 million dollars to pay for January gas. Part of that payment was made thanks to the loan from Russia that set off the current crisis; Ukraine received the first $3 billion tranche in December. Russia was prepared to provide another $2 billion by purchasing Ukrainian bonds, but those plans are now on hold until the political situation stabilizes. The price of gas has been a regular touchpoint between Russia and Ukraine.

Of all the Russian companies operating in Ukraine, banks have so far been the most affected. Many have been forced to impose restrictions on various banking operations and to limit daily cash withdrawals through ATMs. They say the limits are in place to allow all customers to make withdrawals and avoid a run on the banks.

Banks have also become more cautious about lending. German Gref, head of Russia’s retail banking giant Sberbank, announced on Friday that while the bank would not be extending credit to new personal and corporate customers, existing customers remain unaffected. The bank said in a statement that the restrictions will be lifted “as soon as the situation on the financial market is stabilized.”

Western banks are also cautious about the developments in Ukraine. The European Investment Bank, which was founded by the EU member states, announced on Feb. 19 that it was freezing all operations in Ukraine until political stability is restored. The European Bank for Reconstruction and Development (ERBD) has announced that it will not be suspending operations, but said the focus of its efforts will shift to helping the private sector rather than state institutions.

Businessmen are cautious in their outlook for the situation in Ukraine and in their assessments of the risks of dealing with Ukrainian partners. None of them, however, has expressed any serious concerns.

Sergei Chemezov, head of the Rostech corporation, said on Saturday that the events in Ukraine will not have any serious effect on his company, which sources helicopter engines from the Ukrainian maker Motor Sich. Rostech has long been planning, however, to substitute the imports from Ukraine with engines made by its own division, the United Engine Corporation.

Russian Agriculture Minister Nikolai Fedotov said on Feb. 21 that while there has not been any disruption in agricultural trade between Russia and Ukraine, the threat of such two disruption was very real. He added that in a certain sense, Russia could even benefit economically from the instability in Ukraine - for example, by increasing its exports of cereals and oil-bearing crops. Russia and Ukraine have long been competitors in these markets.

This article was based on reporting from Kommersant and Gazeta.ru