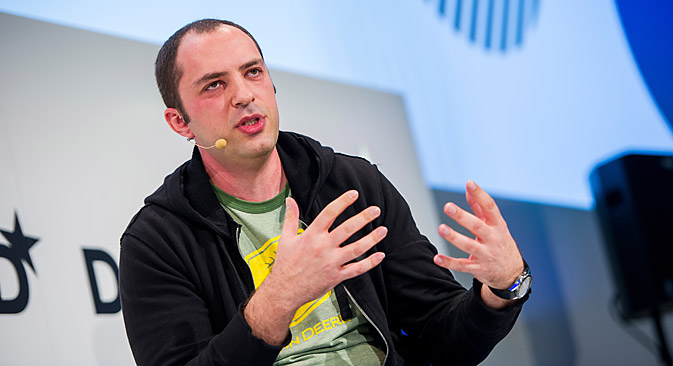 As of February 23, 4.95 million people had installed the Telegram mobile messenger, making it the most downloaded application in 48 countries – all thanks to Mark Zuckerberg.

As has been widely reported, Mark Zuckerberg's Facebook recently acquired the mobile messaging service WhatsApp in a landmark purchase for $19 billion.

Telegram is a mobile messaging application based on the protected protocol MTProto. The project is led by the Durov brothers: Nikolai Durov is the technical director and author of the protocol, while Pavel Durov is responsible for the financing and marketing. Most of the developing team are also Russian. The company is headquartered in Berlin and registered in the U.S.

In the wake of the deal, many disappointed WhatsApp users have defected to Telegram. In several countries (Chile, Germany, Mexico, the Netherlands, Spain, and several others), this secure mobile messenger has even become the most downloaded application.

The growth in the application’s customer base is also evident from a steady flow of new user reviews on Google Play: some of the authors have been quite frank in their admission that they migrated to Telegram over the WhatsApp sale.

Why is Telegram better?

Firstly, there is the data protection consideration: WhatsApp is known to have failed in this department before, whereas Telegram's main selling point is its security. Developer Pavel Durov, who also is the founder of the popular Russian social network VK (Vkontakte), has even offered a significant bounty to anyone who manages to find a vulnerability in Telegram's MTProto protocol.

Secondly, WhatsApp was loved principally for its lack of adverts, whereas Facebook is notorious for its sponsored content. Both Facebook and WhatsApp founder Jan Koum promise that the sale will change nothing for WhatsApp users, but there are indications that many existing customers do not quite believe this. Telegram, for its part, is positioned as being 100 percent free, and the founder promises it will always be so.

Additionally, Telegram stands on the shoulders of Durov's successful VK project. The messenger can be used for downloading unlimited volumes of video, audio, pictures, and documents. It is not yet clear, however, how the company is planning to settle the copyright issues: the VK experience in this sense is not entirely encouraging.

Furthermore, many describe Durov as being introvert and secretive. Perhaps this is the reason why Telegram has a chat mode for the particularly paranoid. Based on an end-to-end encryption protocol, this mode leaves no traces on the internet or on the user's device, and destroys all messages on the user's device immediately after they have been sent.

Last but not least, there is usability. Telegram is a cloud service, making it much faster than WhatsApp or Line. Another plus is that the application can be installed on several devices simultaneously, including on a desktop.

The next time Telegram saw a peak of 100 registrations per second was when WhatsApp developed connectivity problems. This time around, the existing and new Telegram users were bringing their contacts along. By 23 February, 4.95 million people had installed Telegram.

However, according to Google Trends, the flurry of news reports related to Facebook's deal with WhatsApp may have boosted brand recognition levels for the latter: the "what is WhatsApp?" search query has recently been used much more frequently on Google than queries for alternative products.

So far, WhatsApp looks well placed in the application war with its rivals. It will be interesting to see, however, how the situation will look in a year's time if Telegram manages to keep its current customer base growth rate at 1.2 million people per 48 hours.