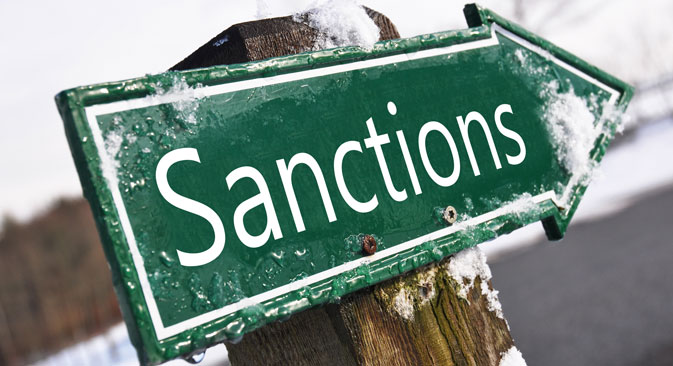 Economic sanctions, if they are carried out, could affect a variety of Russian industries, but Russia’s international partners could be hurt as well.

On March, 6 the U.S. has imposed sanctions against Russian and Ukrainian officials and individuals whom the White House believes to be posing a threat to Ukraine's integrity. The U.S. also stated it could impose additional sanctions in case the situation around Ukraine worsens.

Although Western governments have threatened more serious economic sanctions against Russia over the situation in Ukraine, the integrated global economy is making any serious moves difficult.

The United States, which has fewer economic ties to Russia than does the EU, is more likely to follow through with its threat to impose sanctions against Russian banks, government agencies and private investors; visa restrictions for Russians are also possible. U.S. President Barack Obama first mentioned the possibility of sanctions a week ago and reiterated yesterday that he was ready to impose them. In the meantime, trade talks between Russian and American officials, which were scheduled to accelerate in the coming months, have been suspended. “We have frozen the upcoming talks with Russia on trade and investments,” said Michael Froman, spokesperson of the U.S. Trade Representative Office Michael Froman.

Any sanctions from the international community will hit the Russian stock market hard, said Arnaud Leclerc, managing director of Swiss private banking firm Lombard Odier. “Over the past year, many funds have been actively withdrawing capital from Russia, and this trend may increase. Large companies may also suffer from sanctions. Many foreign financial institutions will reduce credit limits for Russia, which is going to hit the trade sector. Russian companies need to negotiate with other banks, such as Chinese or Japanese,” said Leclerc. However, he added that sanctions would harm the United States as well. “In 2013, Russia exported goods worth $27 billion to the U.S. and imported from the United States – $11 billion. In addition, Russia has large reserves in U.S. dollars and is active in the U.S. debt market,” Leclerc said.

The Unites States is likely to lose a market for their meat (poultry, pork and beef) worth more than $500 million. In 2013, Russia imported 250 tons of poultry worth about $300 million. Although American pork and beef were banned by Russia’s Federal Service for Veterinary and Phytosanitary Surveillance a year ago due to the presence of the food additive ractopamine, resumption of supplies was expected to take place soon. As a reaction to Russia’s action in Ukraine, however, the Americans side canceled a visit by the Russian vets who were planning to resolve the issue.

Russian titanium company VSMPO-AVISMA has said that it does not fear U.S. sanctions, and that the tension between the two countries had no impact on the relationship and agreements between the firm and Boeing. The Russian company provides 40 percent of the American aviation firm’s titanium.

At the end of 2013, Morgan Stanley agreed to sell to Rosneft its oil trading division. This transaction is currently pending at the U.S. Committee on Foreign Investments. At the moment, negotiations are taking place in accordance with the previously agreed-upon schedule, according to a representative of Rosneft.

“We need to be concerned about the West accelerating the process of moving away from energy dependence on Russia, rather than a direct refusal of Russian oil and gas,” said Igor Nikolayev, director of the FBK Institute of Strategic Analysis. “Europe can tolerate some costs and purchase liquefied natural gas from Qatar.”

According to U.S. Sen. Chris Murphy (Democrat-Connecticut), who is the chairman of the Senate subcommittee on Europe, unilateral U.S. sanctions against Russia will not be very effective without EU sanctions as well. Europe, however, has been adopting a wait-and-see attitude.

EU foreign ministers stated at their meeting on March 3 that if “immediate steps to defuse tensions in Ukraine” are not taken, then some “targeted measures” against Russia could be agreed upon at an emergency summit of heads of states and governments of the EU.

According to a diplomatic source in Brussels, “no additional or more stringent sanctions against Russia were discussed [at the meeting], just a stop of negotiations on visas and the EU-Russia Cooperation Agreement.”

Alexander Bolomatov, a parter at the UST law firm, said that the EU is more likely to enact more personal sanctions, including restricting remittances, imposing a visa ban on some officials, halting negotiations on visa simplification and canceling a special travel rules that apply to students, scientists, those seeking medical and those traveling to join EU resident family members of families.

Alexander Shokhin, president of the Russian Union of Industrialists and Entrepreneurs (RSPP), said there could be some sanctions with an economic effect. “We can talk about moderate traditional sanctions – against officials, state-owned companies, and so on,” Shokhin said, but he added, “This is unlikely to be the freezing of assets of private companies or forced delisting on the London Stock Exchange.”

Shokin thinks that any such action by the EU could be taken as a sign by European banks to get their money out of Russia. “There may be a hint to the European banks and funds to wind down their programs in Russia. They can, in any case, shift to Brazil," Shokhin said.

According to Alexei Portansky, a professor of global economics and international politics a the Higher School of Economics in Moscow, Russia may have problems during negotiations with specific WTO members, but excluding Russia from the organization is impossible. Nevertheless, the process of Russia's accession to the OECD may slow down. Portansky expects an overall deterioration in the atmosphere of international negotiations: “It can become more difficult to promote the position of Russia, for example, on recycling collection, and European energy corrections.”

This text has been abridged from the original, which can be read at RBC daily.