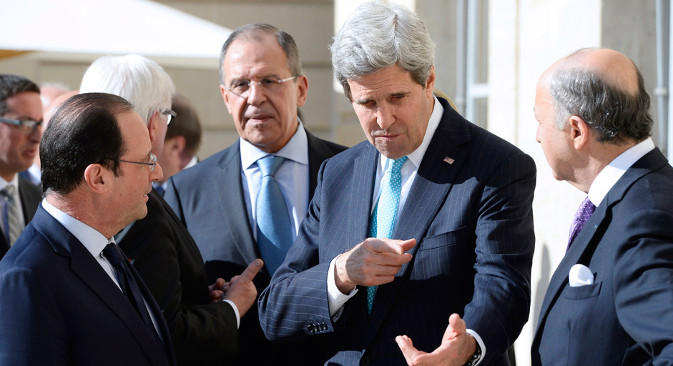 Russian experts continue to believe the West will back off economic sanctions because of potential damage to the global economy.

After a March 6 meeting of the European Council on Ukraine, the Russian Foreign Ministry issued a statement saying that while it hoped that the EU and the United States did not follow through with threats to impose wide-ranging economic sanctions, if they did, these sanctions would not go unanswered.

However, the statement continued to say that the Foreign Ministry still hoped that the discussion up to this point was only talk and that EU representatives would eventually take Russia’s position into account.

The language of the statement, published on the Foreign Ministry’s official website on March 7, followed a statement made by President Vladimir Putin on March 4 in which he noted that all sides would be damaged by sanctions because the world is more interconnected than ever.

"One certainly gets the impression that an opportunistic approach prevailed over common sense, which would dictate the need to at least listen to the principled position of Russia, who is a strategic partner of the EU," the statement read.

So far, the EU has decided to halt talks on a visa agreement with Russia and negotiations over a new cooperation agreement between Russia and the EU.

The United States has announced that it intends to freeze the accounts of government officials it considered participants in the intervention in Ukraine as well as ban them from receiving visas to the U.S.

However, there have not yet been any subsequent economic sanctions from the White House or the EU.

Alexander Gusev, director of the Institute for Strategic Planning and Analysis, does not believe that the EU will try to influence Russia with economic sanctions since such a move will harm Europe itself.

"I think that there will not be sanctions, because right now, of course, people are waiting to see what happens. Currently, leaders of the EU and the U.S. are looking into ways to put pressure on Russian leadership and officials. It is clear that these sanctions won't lead to anything good. If you're talking about economic sanctions, it is clear that the relationship between Russia and the United States is quite different from that with the European Union, whose trade with Russia is around €360 billion. What kind of sanctions could there be? They will lose everything," said Gusev.

Political analyst Sergei Karaganov, commenting on the threats to impose sanctions against Moscow, told Vzglyad newspaper that Western countries cannot even temporarily refuse Russian energy, or bring down the price of oil and gas, as was done in the 1980s after Soviet troops invaded Afghanistan.

"It's impossible to stop consuming energy, and everyone knows it. The United States has no way of dropping the price of oil, because the situation is fundamentally different. To do this, as before, would require an agreement with Saudi Arabia, but I doubt that the kingdom would agree to an artificial decrease. In the 1980s, the Saudis seriously feared that the Soviet Union would try to break through to the Indian Ocean, but today the situation is clearly completely different," Karaganov said.

He did not rule out that attempts may be made to slightly lower oil prices, however, there are other consequence to consider. "Reducing prices would benefit primarily China and other direct competitors of the West," said Karaganov.

"We can expect that there will be attempts to threaten and bluff. I think it will not come to severe economic sanctions, but certainly some symbolic steps will be made. On the other hand, they will try to put pressure on some particular individuals.”

Russian political analysts doubt that economic sanctions will be imposed, not only because international firms would be affected by the move, but also because the EU and the U.S. have failed to agree on a unified course of action.

In an interview with Russian daily Kommersant, Vladimir Batyuk, an expert from the Institute for U.S. and Canada Studies, said that the U.S. and Europe have different positions on Russia, which affects their ability to respond.

"The U.S. has a rather wide range of possible sanctions it could impose on the Russian Federation. However, the effectiveness of these sanctions is somewhat in question,” Batyuk said.

“European partners and U.S. allies, as I understand, are not in a rush to impose some sort of wide-ranging sanctions against Russia. That's why the U.S. apparently has decided for now to only introduce some sort of list of Russian officials that will be refused entry into the U.S., which has not yet been put together. Formally, there are sanctions, but actually, there aren't any.”

This article was based on reporting from RIA Novosti, Vzglyad and Kommersant.