How will Russia’s economy fare in a world of crises? 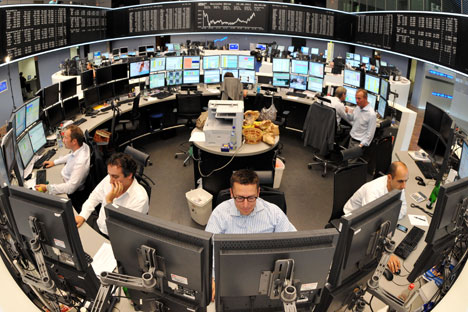 Governments and monetary authorities are hoping that the economy will be able to grow out of debt. Source: Photoshot / Vostock-Photo

Volatility in global financial markets is rapidly increasing and the threat of another global crisis is on the agenda again. But according to experts at the Russia Business Week 2014 forum, held in London in March, G20 governments are ready to protect their economies.

Lack of coordination between governments and a focus on the domestic economic situation of states leads to a kind of de-globalisation, to the formation of more closed economies, which, ultimately has a negative impact on the financial situation as a whole, said Neil MacKinnon, VTB Capital Global Macro Strategist.

MacKinnon said: “We know from history when things are bad economically, policy makers look after their domestic economy, but sometimes the objectives of domestic policy can conflict with global objectives – this is where we are at the moment."

To maintain low interest rates in the context of global instability, the United States continues to pursue a policy of monetisation of government debt by buying sovereign bonds – the Federal Reserve System has actually become the largest creditor of the US economy, increasing the amount of treasury bills on its balance sheet 2.5 times over the past four years.

Accordingly, the money supply is growing – since the pre-crisis year of 2008, it grew almost by 4 times (this growth is equal to the increase that occurred during the 20 years prior to the crisis).

In the Eurozone, the money supply increased by 1.5 times. To reduce the risks of a deflation trap, economists urge the European Central Bank to conduct quantitative easing, similar to the US, by buying up to 0.7 per cent of Eurozone government debt each month.

However, instead of stimulating consumer demand and investment, cheap money leads to the formation of asset bubbles: in real estate, precious metals, assets in emerging markets and derivatives. Government budgets in the largest economies of the world continue to accumulate deficits and the debt burden on the world economy keeps growing.

Governments and monetary authorities are hoping that the economy will be able to grow out of debt, and that inflation will gradually reduce the debt burden.

A tighter monetary policy and a rise in interest rates to levels higher than inflation could, sooner or later, trigger a major global financial meltdown comparable to that of 2008 – so politicians are trying to postpone this moment as far as possible, and continue to print money.

Against a background of big problems in the US and EU economies, the emerging markets have long remained an island of hope. The reputation of “economies of the future” and investors’ confidence in the prospects of investments, particularly in China, resulted not only in rapid growth, but also in serious responsibility.

However, China is clearly unable to cope with the weight of this responsibility – during the past year, the government has extinguished the debts of China Everbright Bank and the China Credit Trust Co, a fund that financed coal-mining enterprises.

China’s main problem is a credit bubble and misallocation of investment resources. The ratio of investments to GDP is 50 per cent, and this is not a viable structure, Neil MacKinnon, VTB Capital Global Macro Strategist says.

“At the moment, Chinese authorities face this dilemma of, how do they try to meet this 7.5 percent growth target when they have a debt to GDP ratio at 230 percent? They are trying to deflate the credit bubble without causing a crash in the Chinese banking system.”

Members of the expert community called the hopes for emerging markets, which currently account for about half of the global economy, “a big disappointment”.

Against this background, the position and future of Russia do not look so menacing. Having transformed from an enemy of China into its strategic partner, Russia has strengthened its position in the energy sector and, despite the geopolitical uncertainty of the moment, is a key element of trade relations between Europe and Asia, as well as a major supplier of energy resources in Eurasia.

However, experts urge attention be paid to Central Asia, which is still insufficiently appreciated. In Western perceptions, it remains a strange and uncharted part of the world. Meanwhile, the region is inhabited by about 80 million people, it has the second largest uranium deposits in the world, the fourth largest deposits of gas and gold, and is eighth among the regions for oil fields.

In the next 10 years, the share of Central Asian oil on the global market is expected to grow from 2 percent to 10 percent and that of natural gas from 7 percent to 14 percent.

This gives the region a head start, according to Liam Halligan, The Telegraph columnist, who said: “We are going from 6 to 8 billion people in the world pretty rapidly, over the next 20 to 25 years, according to the UN, and the only part of the world that can seriously respond – in terms of more energy production without using extremely expensive methods such as shelf – is Central Asia."

Commenting on the threat of economic sanctions against Russia by Western countries because of the crisis in Ukraine, Halligan advises us not to forget about the volume of trade between the parties.

There’s something to think about here – in the last 10 years, trade turnover between Russia and the EU rose from 90 billion euros a year to almost 400 billion a year.

This makes sanctions a weak instrument, the expert said, explaining: “Russia is Germany’s biggest single trading partner, and vice versa, you have enormous investments by US and European corporations and they are not going to want those investments jeopardised. There will be some face-saving clampdowns on certain individuals, but I have almost no doubt that there won’t be robust trade sanctions.”