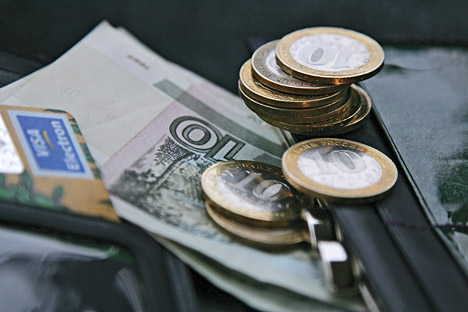 Experts predict that by the end of the year the ruble will be trading at 37.50-38 to the dollar. Source: ITAR-TASS

Since the start of the year, the Russian ruble has more than once come under serious pressure but has so far managed to withstand the strain, largely thanks to efforts by the Central Bank.

Since early March this year, against the backdrop of continued confrontation between Russia and the West over the situation in Crimea, the Russian stock market has dropped by 20 percent. At the same time, the Russian ruble has lost 9.6 percent of its value since mid-January.

Russian financiers are increasingly comparing the current situation with that of 2008, when Russia was involved in a brief armed conflict with Georgia and the financial markets reacted in a similar way.

"For the time being, the confrontation is not being exacerbated by serious macroeconomic and financial problems,” says Maxim Vasin, a senior analyst with the National Rating Agency. “Large banks are stable and there is no big panic. However, if we see big bankruptcies or the insolvency of major companies or banks, the situation on the market may change."

How much has Ukraine brought the ruble down?

The assertion that ruble volatility is a direct consequence of the events in Ukraine is only partially true. The devaluation of the ruble was started by the Bank of Russia at the end of 2013, when the regulator began to push the currency corridor upwards by not intervening in currency trading and allowing the ruble to gradually fall.

By Feb. 25, the RUB/USD pair was trading at 35.5112 and by March 1, already at 36.1847. Following the vote by the Federation Council to authorize deployment of Russian troops in Ukraine, the ruble could have dropped even further, however on March 3 the Bank of Russia raised its key rate to 7 percent and increased its currency intervention in order to support the ruble. This prevented the ruble from plummeting and by Mar. 14, the RUB/USD stood at 36.4566.

In mid-January this year, the Central Bank gave up any regulation of the exchange rate whatsoever, letting the ruble float freely. The market reacted immediately: Foreign currency went up and major Russian banks began to buy it in large quantities at a higher rate.

"One of the main reasons behind an increase in capital flight was the news of the gradual reduction of quantitative easing in the USA," says Mikhail Kuzmin, an analyst with Investcafe. He believes that some investors opted for so-called "flight into quality".

Late February and early March saw a further devaluation of the ruble as the upper chamber of Russian parliament, the Federation Council, authorized President Putin to deploy Russian troops to Ukrainian territory if necessary.

As of early February, the ruble had already lost 6.6 percent of its value and after the Federation Council vote could have collapsed altogether. But the Central Bank decided to raise its key interest rate to 7 percent and stepped up its currency intervention. On March 3, the Bank of Russia carried out a foreign exchange intervention worth $11 billion, 10 times the average amount of previous interventions. After that, the ruble instantly went up. "That prevented a further serious fall of the ruble," Kuzmin concludes.

How much does it cost to keep the ruble afloat?

One could say that since the moment Russian soldiers appeared in Crimea, which the West and Ukraine strongly object to, the Bank of Russia has clearly been controlling fluctuations of the ruble rate.

"The ruble is losing its value extremely slowly and under full control of the regulator. It is falling as much as the Central Bank allows it to, while the bank is spending large amounts of gold and foreign exchange reserves in order to meet the demand of all those willing to buy foreign currency on the market," says Maxim Vasin.

Many Russian experts point out that the panic from the stock market is not spreading to the currency market and the ruble continues to remain relatively stable thanks to the Central Bank's intervention and mechanisms of support for the banking sector.

Such a strong demand for liquidity among banks indicates that they are currently in need of additional funds and are ready to pay more for them, as the rate has been raised from 1.5 to 7 percent. The banks may use funds received from the Central Bank either for ruble loans or for foreign exchange operations (buying foreign currency from individuals).

Experts predict that, provided there is no significant fallout from the events in Ukraine, by the end of the year the ruble will be trading at 37.50-38 to the dollar, and at 53.2 to the euro.

If however, under the influence of economic sanctions and capital flight, the stagnation of the Russian economy descends into a recession, the exchange rate may be 40 and 55 rubles respectively.

The Russian government expects that a partial devaluation of the ruble should improve the budget situation, which is currently under great strain due to the cost of the Sochi Winter Olympics, and bring an additional 760 billion rubles into state coffers.