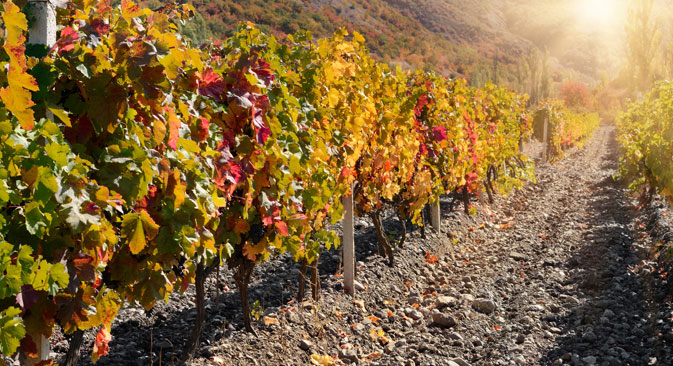 Moscow journalists spoke to three Russian entrepreneurs who own businesses in Crimea and asked them how they thought the peninsula’s absorption into the Russian Federation would affect their business prospects.

The decision by the people ofCrimea to join Russia means big changes will soon be sweeping the area – privatization, modernization, and an influx of investment. However, it has also brought instability and an uncertain future for many businesses on the peninsula. RBC daily spoke to three Russian entrepreneurs who chose to set up shop in Crimea and asked them what consequences they thought the region’s absorption into the Russian Federation would have for their business.

Nine years ago, Moscow sommelier Pavel Shvets decided to come back home to Crimea and plant his own vineyard.

In 2006, Pavel founded the UPPA Winery and planted 10 hectares of Crimean land with European grape varieties. He began to sell his first bottles of wine in the fall of 2013. According to Pavel, his total investment into the project was about 500,000 euros ($690,000) – about 200,000 euros were invested into the vineyards and 300,000 euros were spent on the purchase of agricultural machinery. All these were purchased from Pavel’s own savings.

According to Alexander Sidorov, a member of the Union of Experts and Sommeliers of Russia, Pavel’s first wines were natural and the project, as a whole, showed great potential.

“However, it will be very difficult to make this business successful, as Pavel makes expensive wines in Crimea, which has the reputation of a place where quite simple food is produced. Besides this, biological winemaking is quite a difficult concept to sell to consumers. His wines cost $22-27 (800-1,000 rubles) per bottle in restaurants – these are quite unimaginable prices for the local people. Here people can drive a Porsche, but will never pay that kind of money for wine. They are simply not used to it. But everything changes,” RBC daily learned from Oleg, a Crimean acquaintance of the winemaker.

The news about the peninsula’s absorption into Russia was treated warily by the entrepreneur. “We are now told in Crimea that the Russian market will open up for us. But it has never been closed,” says Shvets. “There have never been import taxes on wine between Ukraine and Russia. It is more likely that we can say, because of all these events, we have now lost the Ukrainian market.”

State agency Rosalkogol, which oversees the sale of alcohol, told RBC daily that Crimean wine makers and other members of the local alcoholic beverages market have no need to worry. The procedure for license renewal has already begun and the process for receiving applications for excise stamps is being developed.

Two years ago, Oleg Nikolayev decided to settle down in Crimea. “I just love living here, my wife was born here. This place is incredible,” explains Nikolayev. “I was born in Krasnodar, and later lived in Moscow for 12 years. Over the years, I never felt at home in Moscow. I have lived here now for two years, and I feel that this is my home.”

Last year, the entrepreneur opened his own restaurant in Sevastopol, which he called Ostrov (Island). Investments totaled $500,000. To open a restaurant of a similar class in Moscow, you would need $3 million,” says Nikolayev. “I have a drawing on the wall of my restaurant, showing Crimea as an island. It was my dream that Crimea would become a separate state,” says Oleg Nikolaev.

London takes a seat at the Russian table

“But I understood that if it became independent, many problems would appear. The republic would become like Northern Cyprus. The fact that Crimea became a part of Russia is better than anything we could have dreamed of.”

Nikolayev does not hide his joy that Crimea has become a part of Russia, but he says that he is also aware of all the risks. “There will be a lot of changes here; all the infrastructure will be modernized and large sums of money will be invested. We are realists and understand what will happen,” he says.

“Land privatization will begin, and everyone wants to make money on this process. Some people called from Rostov. They said: “We need two offices; we are opening a law firm that will work on registering transactions.” Many predators and scammers will come here, people who feel there is a lot of money to be made.”

Yury Pendalchuk, an ethnic Russian who holds Russian citizenship, owns several companies in Ukraine. His main income comes from the sale of medical equipment and the processing of concentrated food colorings into final products.

In 2012, Pendalchuk purchased land on the Crimean coast for the construction of a hotel. Two years later, a luxurious complex was built, which the entrepreneur planned to sell to a large corporation. He estimates this transaction as being worth $7 million. By the beginning of the conflict in Crimea, Pendalchuk had finished the construction of his hotel. Now the building sits empty.

Due to the devaluation of the Ukrainian hryvna, Pendalchuk’s companies have lost about $100,000. Contracts with foreign suppliers were signed in U.S. currency and on deferred payment terms. The general depressed mood that Pendalchuk says currently hangs over Kiev and Crimea is depriving him of a large amount of profits. According to his calculations, since the beginning of the Crimean conflict, his medical equipment sales have fallen 2.5 times.

Although Crimea’s accession to the Russian Federation has practically buried Pendalchuk’s own project, the entrepreneur feels positive about the overall effect on the economy. “There is no longer any repression from the state apparatus and officials. The era of widespread bribery is gone, and the remaining officials will not risk their jobs for the next kickback,” he says.

Igor Bukharov, president of the Federation of Restaurateurs and Hoteliers of Russia, feels confident that the entrepreneur has good prospects of finding a buyer for his hotel. “On the Russian coast, all vacant plots for building were distributed long ago, so Crimea will soon become a very attractive place for foreign investors,” says Bukharov.

Full text was published in Russian at RBC daily.