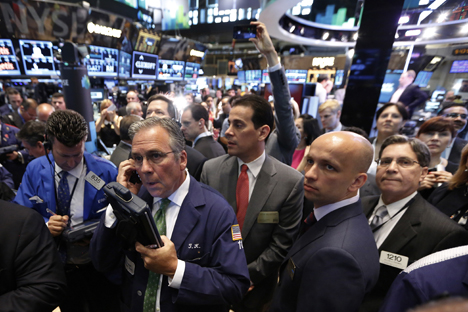 Tensions between Russia and Europe and the U.S. have hit markets and caused Russian firms to take a hard look at their plans to list on stock exchanges in 2014.

Plans for Russian companies to list billions of dollars worth of shares on global exchanges have been thrown into question by the conflict over Ukraine.

Both state-owned and private companies are mulling plans to sell fresh equity to investors in 2014. Russian Prime Minister Dmitry Medvedev said at the start of the year that the government hopes to raise more than $5 billion in 2014 selling stakes in state-held firms.

“We have rather serious plans to raise around 200 billion rubles ($5.5 billion) from privatizations this year and I hope the plans will be fulfilled,” Mr. Medvedev told a government meeting in February, only days before the crisis in Ukraine reached new heights.

Yet even before the dispute over Crimea began to impact Russian markets, Mr. Medvedev had sounded a note of caution.

“We should not drag it out,” he said. “But at the same time we should consider the economic circumstances in the world and in the country.”

Russian firms are still hoping to benefit from the global boom in initial public offerings even as relations with Europe and the U.S. — and the investment communities who reside there — have become deeply complicated.

Total IPO volume in Europe, Middle East and Africa hit a record in January as six deals raised $3.1 billion, making it the best start to the year of all time, according to Dealogic, a data provider.

Indeed, the Russian IPO market appeared to reopen in 2013 with several significant companies listing stock. A total of $7.9 billion was raised via nine public offerings.

Those firms included state-controlled Alrosa, the world’s biggest diamond miner, which operates vast mines in Siberia. U.S. investors reportedly bought as much as 60 percent of the shares sold by the diamond miner.

VTB, Russia’s second-largest bank, raised over $3 billion in a secondary offering in May 2013.

Moscow-based lender Tinkoff Credit Systems was another big earner in 2013, pulling in just over $1 billion selling shares on the London Stock Exchange.

Those offerings had followed state-controlled Sberbank, the largest bank in Eastern Europe, listing a 7 percent stake in 2012.

Russian firms had hoped to keep the ball rolling into 2014, with a focus on retailers as Russian consumers flex their rising spending power.

The Euromonitor Research group has predicted Russia will become the largest retail market in the world by 2018, according to Bloomberg.

Russian retailer Lenta, the country’s second-biggest supermarket chain, was first out of the gate in 2014, raising about $1 billion in February in a London listing.

Other big retailers are now eyeing the market carefully. Among those with plans to sell shares include the Russian Cash & Carry unit of German retailer Metro AG, as well as Detsky Mir, Russia’s biggest children’s retailer.

The conflict over Ukraine hit the share prices of Russian companies listed in Moscow, London and New York, and helped push the ruble down to record lows.

Yet a broad slump in emerging markets and sluggish economic growth had been weighing on Russian equity prices even before the crisis over Ukraine. Indeed, some investors had been arguing that low equity valuations in emerging markets were at a point where they were becoming attractive to investors searching for a bargain.

“If you look at the balance of trade that our clients are doing, they’re buying,” Gary Dugan, the chief investment officer in Asia and the Middle East for Coutts & Co., the wealth management group for Royal Bank of Scotland, had told Bloomberg News in February, shortly before the crisis erupted. “There’s been an appetite for Asia and for Russia after the sell-off.”

Last year, Russia’s dollar-denominated RTS index dropped 5.6 percent year-on-year, mainly due to the impact of a weakening ruble, which lost 10.4 percent against the Central Bank of Russia’s basket of currencies, according to Chris Weafer, the CEO of Macro Advisory.

Russian shares were trading at a 25 percent discount to their emerging market peers as of the end of 2013.

As the year began, Russian stocks had the cheapest valuations among 21 emerging-market economies monitored by Bloomberg. Shares on the benchmark were trading at 4.5 times projected 12-month earnings compared to a multiple of 10.4 for the wider benchmark MSCI Emerging Markets Index.

Russian capital outflows have jumped 60 percent from last year following the Ukraine crisis, according to calculations by Goldman Sachs analysts, Reuters reported in mid-March. Goldman predicted total capital outflows would be $130 billion by the end of 2014.