Russian officials’ pay is low, but they get free education and housing 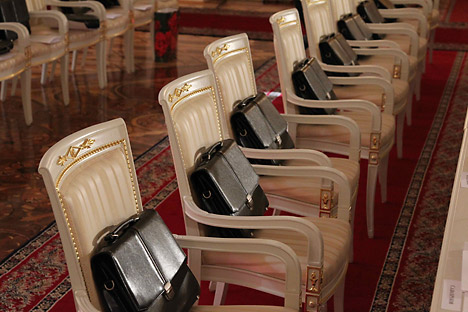 The pay of Russian officials is a few times lower than that of their European and American colleagues. However, they receive material benefits from the government, including free housing, a second university degree, and access to specialized clinics and sanatoria.

Data on the earnings of Russian and American leaders were published in April 2014. According to official declarations, at the end of 2013, Russian President Vladimir Putin’s salary was a few times lower than his American counterpart, Barack Obama.

Russian President Vladimir Putin has signed a decree increasing the salary of the Russian president and prime minister by 165 percent. This means that Putin's monthly earnings now total 9.54 million rubles ($263,000).

Public servants in Russia on the whole earn significantly less than their colleagues in other countries; however, they receive material benefits and privileges. High-ranking officials can use government vehicles, dachas, and the special privilege. Lower-ranking officials also receive benefits, though.

In accordance with the law “On the Civil Service”, officials have the right to subsidized housing or to the privatization of a state-owned apartment, but only one time during their entire career. This is how the mayor of Moscow, Sergei Sobyanin, became the owner of a 308-square-meter apartment in the center of Moscow.

Free education is also considered an important benefit, and here the issue is not just one of  increasing one’s qualifications or training, but of taking a full-blown second college degree, which is available in Russia only on a paid basis.  Besides that, civil servants can use specialized clinics and sanatoria.

With a recession in the private sector, public service is becoming more and more popular in Russia. According to Independent Institute for Social Policy data, the portion of the population engaged in public service as part of the middle class continues to grow. In 2013, public sector employees formed 20 percent of the Russian middle class, one third more than in 2007.

After the collapse of the USSR, the number of government officials in Russia grew significantly, about three times, said Alexander Dorofeyev, general director of the consulting company Arkaim. To precisely compare the number of civil servants is not possible since it is necessary to unambiguously compare differing systems of government organization.

“It is possible to single out three levels of officials: civil servants in federal executive agencies, employees of the subjects of the Russian Federation, and municipal employees,” said Ruslan Korchagin, director of the Public Management Scientific Research Center at the International Institute of Public Administration and Management of RANEPA.

According to the Russian State Statistics Service, if all federal, regional, and municipal employees are counted, then the total number of executive branch employees in Russia is about 1,300,000.

Whatever the case, according to Maxim Klyagin, analyst for the management company Finam Management, considering the number of citizens, the overall number of government officials in Russia is a minimum of two times less than the comparable numbers characteristic of developed countries.

Attracting promising people to government service would contribute to the so-called monetization of benefits. “We have repeatedly proposed monetizing the greater part of the benefits with the goal of increasing the effectiveness of budgetary expenditures,” said Andrei Klimenko, director of the Institute of Public Administration and Municipal Management at the National Research University — Higher School of Economics.  However, according to him, to attract young specialists, pay needs first to be raised to market levels.