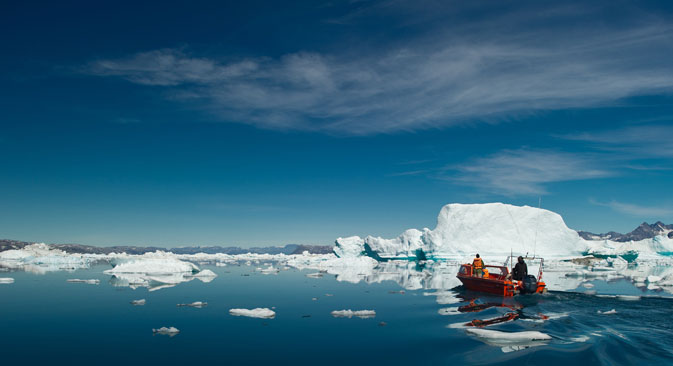 According to U.S. Geological Survey estimates, as much as 13 percent of the world’s undiscovered oil reserves and up to 30 percent of undiscovered gas reserves are located in the Arctic. Source: Photoshot / Vostock-Photo

Nations stake out their claims as climate change opens up more of the Arctic to exploration.

Amid the ongoing tensions between Russia and Western countries over developments in Ukraine, it should come as no surprise that news of an expedition by the Arctic Research and Design Center for Continental Shelf Development has gone underreported.

The expedition is worth noting, however, not least because the Arctic Research Center is a joint project of Russia’s oil giant Rosneft and U.S. firm ExxonMobil. The willingness of the center to go ahead with the expedition indicates that the companies continue to maintain business ties despite political tensions, and they intend to increase their cooperation in a strategically important area — the Arctic.

According to U.S. Geological Survey estimates, as much as 13 percent of the world’s undiscovered oil reserves and up to 30 percent of undiscovered gas reserves are located in the Arctic. Half of these reserves are located in the Russian Arctic sector. Given these statistics, it’s not shocking that, so far, political tensions between Moscow and Washington have not disrupted cooperation between energy companies in this region.

Many experts compare the challenges of developing the continental shelf to space exploration or the evolution of nanotechnology. The exploration of Arctic reserves will require complex technical solutions for the creation of ships, oil rigs and other equipment that can be used in the region. U.S. and European oil and gas companies have the relevant experience and technology, and cooperation with them allows Russia to capitalize on its Arctic assets.

While accessing the latest technologies with the help of international partners makes exploring the Arctic faster and safer for Russia, extracting resources from these regions will not be as difficult as exploring the region in the first place, which Russia did mostly on its own.

In the mid-16th century, Russian settlers from the Novogorod region known as Pomors moved up the tributaries of Siberian rivers and made voyages to the Arctic Ocean and along its coast. In 1648, a group of sailors headed by merchant Fedot Popov and Cossack ataman Semyon Dezhnev rounded the Chukotka Peninsula and reached the Pacific Ocean. The Great Northern Expedition of 1733–1742 mapped the shores of the Arctic Ocean from Arkhangelsk to the Kolyma estuary, the coastline of the Honshu Island, and the Kuril Islands.

In 1899, on an initiative of Admiral Stepan Makarov the world’s first polar icebreaker, the Yermak, was built. It was intended to be used for regular voyages between the Ob and Yenisei Rivers via the Kara Sea and for research trips to study the ocean at high latitudes. In 1914 and 1915, Russian flags were hoisted on the archipelago of Franz Josef Land and on Uyedineniya Island.

Soviet Russia was no less active in the Arctic than the Russian empire had been. On Mar. 10, 1921, Vladimir Lenin signed a decree to set up a floating marine research institute based in the Arctic Ocean.

Over the course of 10 years beginning in 1923, 19 polar meteorological stations were built on Russia’s Arctic Ocean coast and islands. In 1939 and 1940, the distance of the Northern Sea Route was covered in a single navigation season for the first time ever.

Benefits above the surface

The Northern Sea Route may well be a more significant Arctic asset for Russia than the energy reserves in the continental shelf. This transport corridor, together with the Northwest Passage located in Canada’s Arctic zone, make it possible to significantly speed up trade between Europe and Asia. For example, the distance between Rotterdam and Tokyo via the Suez Canal is 21,100 kilometers (13,110 miles).

This allows shipping companies to save on fuel, payroll and freight costs. In addition, there are no waiting lists or restrictions on the size of ships moving through the Arctic like those that limit operations on the Suez Canal.

The role of the Northern Sea Route is also expected to rise considerably due to a growing use of liquefied natural gas (L.N.G.). L.N.G. allows gas producers to sell their product without being tied to the geography of pipelines.

The Yamal L.N.G. project, which is currently being implemented by Russian firm Novatek jointly with France’s Total and China’s CNPC on the Yamal Peninsula in the Russian Arctic, will ship L.N.G. via the Northern Sea Route. In the future, Yamal L.N.G. capacities could be used to liquefy gas produced on the Arctic continental shelf.

Ecological experts have also noted that as a result of global warming and the melting of Arctic ice, which is shrinking at a rate of 5 percent every 10 years, the Northern Sea Route could be open for year-round shipping as early as the 2020s.

Russia is committed to having a demarcation of borders in the Arctic that is in no way ambiguous and is recognized by the international community. Currently, the borders are set on the basis of the 1982 United Nations Convention on the Law of the Sea.

Under this convention, a country’s territorial jurisdiction covers only its continental shelf, while the seabed and reserves underneath it belong to no state. In other words, any country can file an application with the United Nations and other relevant international organizations to develop these offshore reserves.

However, also under the convention, states fronting the Arctic Ocean can make a claim for an extended continental shelf. In December 2001, Russia made a claim for an extension of its Arctic territory up to but not past the North Pole and within the Russian Arctic sector.

The claim was based on the argument that two ridges, the Lomonosov Ridge and the Mendeleev Ridge, are extensions of the Eurasian continent. This November, Russia followed up, asking the U.N. Commission on the Limits of the Continental Shelf, which oversees Arctic jurisdiction, to declare the Lomonosov Shelf part of Russia.

Vadim Yershov is a Moscow-based writer with 15 years’ experience who specializes in Russia’s economic strategy and the geopolitical role of the country.