Who has been punished by the latest U.S. sanctions? 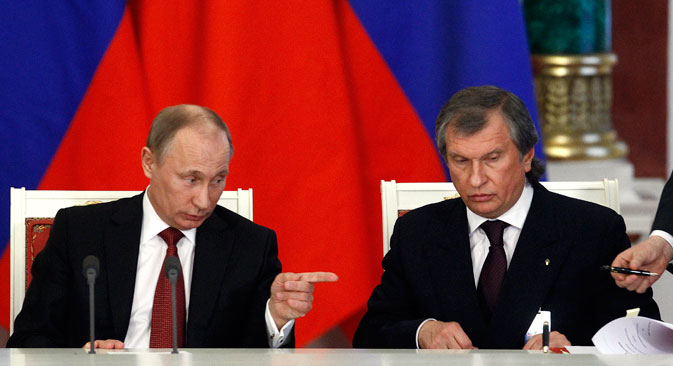 On April 28, Washington announced it was imposing a fresh wave of sanctions against Moscow in response to what it perceives as continuing Russian intervention in eastern Ukraine and a failure to take concrete steps to implement the agreement signed in Geneva on April 17.

The most important development has been the inclusion on the list of Rosneft head Igor Sechin, who is active in the United States. A former lecturer and Portuguese translator, he met Vladimir Putin back in 1990 and since that time has been considered one of his most devoted associates.

Sechin has been one of Putin’s aides since 1991, when the future Russian president worked in the Mayor’s office in St. Petersburg. In time Sechin became deputy prime minister and it was his idea to create an alternative on the oil market to Gazprom, the largest state monopoly.

Rosneft was to become that company. Among other things, Rosneft took over the assets of Yukos, the largest oil holdings company in Russia. Yukos had previously belonged to the disgraced oligarch Mikhail Khodorkovsky, who was imprisoned for more than 10 years on charges of embezzlement and tax evasion.

In 2012, Sechin left the government and was made president of Rosneft. Under his leadership, the company began an active expansion on the global market. Back in 2011, the American company Exxonmobil became a strategic partner of Rosneft: together the two firms planned to extract hydrocarbons in the Russian Arctic.

In April 2012, speaking at a showcase of the Russian oil sector in New York, Sechin compared the Rosneft-Exxonmobil alliance with a “flight to the Moon”. In the end Rosneft acquired some of the deposits in Texas. Furthermore, he secured a deal with British Petroleum, as a result of which the British giant acquired a 19.75 percent stake in Rosneft.

Sechin himself has been to the United States at least three times in the last two years. From now on, however, the Russian company will be represented in negotiations with Exxonmobil by somebody else, first and foremost his deputy Zeljko Runje, an American citizen. By a happy coincidence, Runje used to work at Exxonmobil.

The others new to the list are mainly active politicians, although one of them, Sergei Chemezov, is linked to friendly relations with Vladimir Putin. Chemezov is head of the state corporation Rostekh, founded on the principle of a South Korean chaebol (the term given to large, corporate family-controlled groups with strong links to government agencies –Ed.) to develop high-technology products and IT.

According to his official biography, Chemezov met the future Russian president while Putin was serving in the German Democratic Republic back in the 1980s, and even lived in the same apartment block as him for some time. Up until 2007, he led the Rosooboronexport organization and was responsible for the delivery of Russian arms abroad.

Aside from Igor Sechin and Sergei Chemezov, Russian Deputy Prime Minister Dmitry Kozak and Deputy Head of the Presidential Administration Vyacheslav Volodin have also been placed on the sanctions list.

Kozak began his career in the Mayor’s Office in St. Petersburg along with Vladimir Putin and has since held various positions in the Russian government. It was Kozak who led preparations for the Olympic Games in Sochi. He is now responsible for the integrated development of Crimea following its incorporation into the Russian Federation.

Meanwhile, Volodin is in turn currently responsible for internal politics in Russia. Aside from Kozak and Volodin, the presidential envoy to Crimea, Oleg Belaventsev is also on the sanctions list.

Lastly, the U.S. list included the head of the Federal Protection Service (FSO), Yevgeny Murov, responsible for the security of Russia’s most important figures – as well as Head of International Affairs in the Gosduma (State Duma) Alexei Pushkov, a former journalist famous for his anti-American comments.

In this case it is Murov’s position alone that explains his inclusion. The Federal Protection Service is a powerful department, likened to the Federal Security Service (FSB) or the Foreign Intelligence Service (SVR).

The effect on the banks

Aside from these seven individuals, 17 Russian companies were named in the new U.S. sanctions. In the main this concerned organizations that are controlled by Boris and Arkady Rotenberg, Gennady Timchenko and Yury Kovalchuk, who have already been named on the list.

All four entrepreneurs are considered close friends of Vladimir Putin. Specifically Arkady Rotenberg practiced judo with the future Russian president in the same club as a child. On Putin and Timchenko’s suggestion he subsequently founded a judo club in St. Petersburg.

The U.S. government has also introduced sanctions against companies belonging to these entrepreneurs. The biggest of these is Stroygazmontazh, Gazprom’s largest pipeline subcontractor. Interestingly, the company mainly uses U.S. Caterpillar technology in its work, the servicing of which will clearly be suspended in the near future.

Aside from the big players, the list also included the mineral water producer Akvanika, which belongs to Gennady Timchenko. This company only operates on the Russian market. The plant produces 500 million liters of non-alcoholic drinks per annum.

Three banks incurred more serious damage from the American sanctions. These are SMP-Bank and Investkapitalbank, both controlled by the Rotenbergers, as well as Sobinbank, which belongs to media magnate Yury Kovalchuk. They are no longer able to process foreign currency or service MasterCard or Visa card transactions.

Despite the severity of the American position, the Russian securities market responded to the announcement of new U.S. sanctions with sudden growth. At the close of trading the Russian Moscow Central Stock Exchange (MMVB) and the Russian Trading System (RTS) were up by 1.49 percent and 1.78 percent respectively.

“The sanctions introduced against Russia were moderate and were directed against the leaders of a series of companies, and not against sectors as previously anticipated,” says Vitaly Almazov, an analyst at MFX Broker.

Up until then representatives of the American administration had threatened to introduce sanctions against the whole Russian financial sector: In that case all MasterCard and Visa cards issued in Russia would have been blocked together with all transactions in U.S. dollars. Both these payment giants are registered in the United States and meet all requirements under American law.