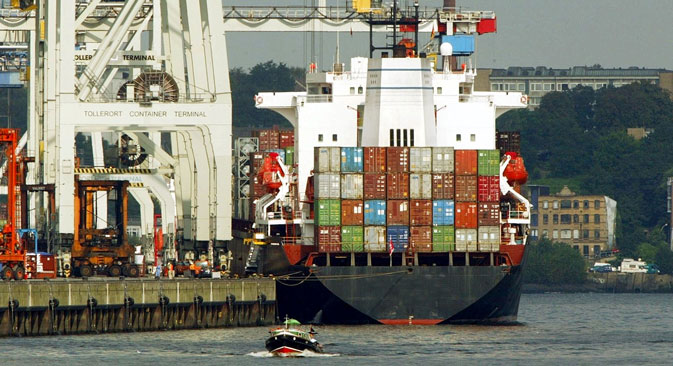 De facto recognition of Russia as a developed economy may be part of sanctions. Source: AP

The United States has canceled preferential rates of duty on imported Russian goods. The step amounts to a de facto recognition by the U.S. of Russia as a developed economy, though in fact the move may be part of the sanctions imposed by the U.S. upon Russia in response to its involvement in Ukraine. Other BRICS countries, like India and Brazil, continue to enjoy special trade benefits.

In early May 2014, the U.S. government decided to withdraw Russia's eligibility for lower import tariffs that were introduced for developing countries under the Generalized System of Preferences program back in the 1990s. The step amounts to a de facto recognition on the part of U.S. authorities of Russia as a developed economy, though in fact the move could be viewed as part of the series of sanctions imposed by the U.S. upon Russia in response to its involvement in Ukraine.

The main purpose of the GSP program was to encourage the U.S. to trade with poor nations. As soon as the Russian economy began to grow, however, it could no longer claim eligibility for trade benefits. In 2013, the World Bank classified Russia as "a high-income country" since national income per capita in Russia had risen to $12,700. Thus, in the opinion of the U.S. side, Russia is capable of paying tariffs in full.

However, the benefits were canceled six months earlier than planned: Originally, Washington was planning to take this step in January 2015. According to U.S. National Security Council spokesperson Caitlin Hayden, despite the fact that this decision is in no way connected to sanctions, the situation with Ukraine has considerably sped up the decision-making process.

The GSP program covered 3,500 types of imported goods, although Russia made use of only one-tenth of the list and imported to the U.S. only 350 products, mainly in the metals sector.

The list of goods exempt from duty included chemicals, minerals, base and rare-earth metals as well as some agricultural and fish products. The new duty will consist of two elements: a fixed payment and a tax rate. For instance, the duty on a single ballpoint pen will be 0.8 cents apiece plus 5.4 percent of its cost.

According to Investcafe analyst Mikhail Kuzin, the cancellation of preferential duties will not have a significant impact on trade as a whole. In 2013, Russian imports covered by preferential terms made up slightly over 3 percent of Russia's total exports to the U.S.

"Russia's total exports in 2013 amounted to $27 billion. If that figure is reduced by 3 percent, it is unlikely that anybody would feel the difference," he said.

According to BKS financial group analyst Anton Shabanov, as soon as the decision comes into force, an additional customs duty will be introduced, but 95 percent of all the goods imported to the U.S. from Russia are raw materials, for which the customs duty is 2-3 percent. "This difference of 2-3 percent is nothing to speak of," he said.

In 2012, Russia supplied the U.S. with $554-million worth of goods under the preferential scheme, while the figure was $296 million for the first six months of 2013. This made Russia the ninth-largest beneficiary nation under the GSP program.

The biggest beneficiaries of the program are India and Brazil, which in 2012 exported goods worth $4.4 and $2.3 billion respectively under its trade benefits. These countries will retain those benefits.

Moreover, for most developing countries the share of duty-free supplies in their total exports to the U.S. is higher than it is for Russia. For India, it stands at 11 percent, while Georgia in 2012 exported $124-million worth of goods to the U.S. under the GSP program, making up 55 percent of its total exports.