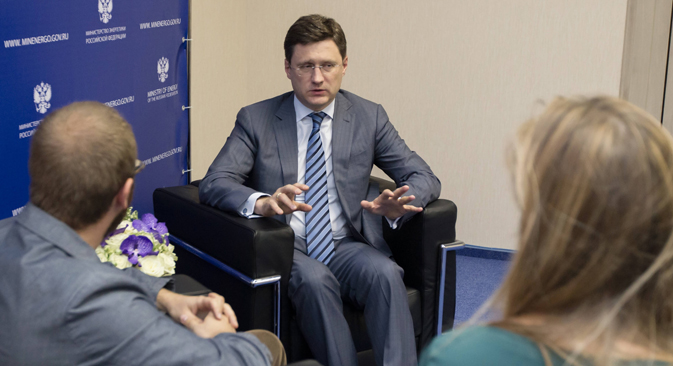 Russia’s energy minister: "Each country, including Russia, is looking for the best options for their economic opportunities and tender conditions." Source: Sergei Kuksin / RG

Energy Minister Alexander Novak sat down with RBTH to discuss what markets may be of interest to Russian suppliers, what steps Russia must take to resolve the energy crisis in Ukraine, and whether the aggravation of relations with Western partners has caused Russia to look for new markets for its energy exports.

RBTH: The Russian delegation recently ended its visit to China, where both sides signed a record agreement for Russian gas supplies to the Chinese market. Can we say that the agreement was the result of the cooling of relations between Russia and its Western partners?

Relations with China are not connected with the events in Europe. We have a long, stable relationship with China, and there are many intergovernmental committees, including the Energy Commission. Many agreements were signed during our scheduled visit to China, and I hope they will be the impetus for the further development of bilateral relations.

RBTH: Do you feel that cooperation between Russian and its Western partners has cooled at all?

Of course, now there is a lot of pressure on companies, both American and European, which currently operate in Russia. But this pressure is not based on economics, but rather on politics. The companies say it is impractical to impose sanctions.

RBTH: Is there, in your opinion, an objective alternative to Russian gas supplies to Europe? And how will U.S. promises to supply Europe with U.S. gas factor into this?

That’s a baseless statement: Without Russian energy resources, Europe will not be able to provide for itself. They will only be able to reduce our share of deliveries after many years. Historically, Russia is rich in natural resources, and Europe is simply not.

Moreover, by 2020, total gas production in Europe will decrease by 100 billion cubic meters, i.e., a 20 percent decline. Any reduction in our deliveries will significantly increase prices.

Currently, the U.S. has no excess gas either, and they haven’t passed any legislation on gas exports. Moreover, there are risks of increasing the domestic value of gas when gas is actively being delivered abroad.

To our knowledge, so far a decision has only been made on the construction of terminals for the production of liquefied gas - totaling 9 million tons - and this gas will go mainly to Asian countries.

Hardly anyone, including U.S. suppliers, is prepared to subsidize Europe on gas prices. Some want to reduce the share of Russian deliveries, but from an economic point of view this cannot be achieved, although in any case we are ready to compete.

RBTH: At what stage are the negotiations with the Ukrainian side?

At the moment, the negotiations process is underway with the European Commission, while Ukraine, since March, has failed to make payments for gas. The situation remains tense, and it worries us in terms of debt payment and the guarantee of gas supplies throughout Ukraine.

In early May, we switched to a system of prepayment, but the issue of debt repayment must be solved together with the EU, which, among other things, should take responsibility for what is happening in Ukraine, as it supported the political changes in the country.

If, by the summer, the necessary volume of gas is not pumped into underground storage facilities, the Ukrainian side can siphon it off, even if it is intended only for European consumers. In general, our position is very clear: The Ukrainian side has obligations under the contract signed five years ago, and they should fulfill these obligations.

RBTH: From the point of view of diversification of supply, what are the prospects of the South Stream project? Can it echo the success of Nord Stream?

The process is underway; the first gas should arrive in Bulgaria by December 2015. This project is very important for the Balkan countries, they themselves are saying this. For them, this means a multi-billion investment, tax revenues, and gas transit, which will paid for by Russia. Of course, these countries are interested in the implementation of similar initiatives.

RBTH: How competitive is Russia in terms of developing new technologies for the extraction of energy resources? How much do we depend on the West on this issue?

We are quite competitive. The Prirazlomnaya platform was commissioned in the Pechora Sea. This project is similar to Norwegian platforms that cannot operate in Arctic conditions, but it is unique, however, in that the weather is not problematic. Moreover, the first oil has already been sent to Rotterdam — so we are technologically prepared for the future.

If we talk about Russia's dependence on the West, I believe that now we are all in the same boat, as the world markets are closely intertwined. However, each country, including Russia, is looking for the best options for their economic opportunities and tender conditions.

As an example of a Russian breakthrough technology project, you can look at the Lukoil offshore platforms project in the Caspian Sea, which is being constructed in Astrakhan.

RBTH: From the perspective of the development of new technologies, I’d like to mention your Yamal LNG priority project. Will we be able to achieve the planned 6 percent of the LPG market, thereby ousting Qatar and Australia?

Yamal LNG is just one of our priority projects. Apart from that, there are plans to build liquefied natural gas plants in Vladivostok, Sakhalin, and in the Leningrad Region. The first phase of the 5 million ton capacity Yamal plant is to be introduced in 2017, and the state has contributed to this project in terms of allocation of funds for infrastructure.

Russia does not have that many diplomatic platforms for promoting its interests. Not a long time ago, Moscow hosted an International Energy Forum. Have you managed to use it to put some messages across to the world community?

The International Energy Forum is a very serious platform and we are grateful that three years ago it was decided to hold in it Russia. This year's event gathered heads of 15 international organizations, with over 100 delegations attending in total.

Without any exaggeration, it can be said that the International Energy Forum has become an important event for our country. We managed to conduct it at the highest possible level. It has become a significant event, at which all participants had an opportunity to voice their priorities and discuss them with colleagues.

Yet, as a rule, the purpose and the outcome of events like these lie not so much in specific decisions as in joint statements. This time round, the main topic for the discussion at the forum was the geography of energy supply and demand and changes to it. All the participants agreed that the focus was shifting towards the Asian-Pacific region.

Apart from anything else, there are some 2.6 billion people still using old sources of energy to cook their food, while 1.3 billion people have no access to sources of energy at all, and this problem must be somehow resolved. There was also an active discussion of the issue of security of supplies and the use of modern delivery instruments. All these aspects were reflected in the concluding statement.