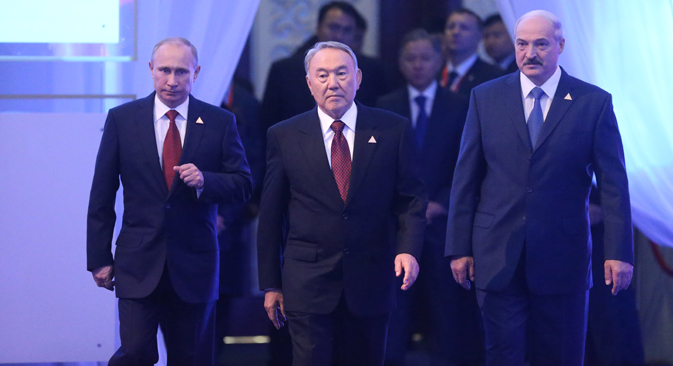 A new trade bloc is to unite Russia, Belarus and Kazakhstan in a single economy. Source: Konstantin Zavrazhin / RG

The leaders of Russia, Belarus and Kazakhstan have signed a milestone agreement on the formation of a Eurasian Economic Union. The historic deal envisages the establishment of a free trade bloc with unbarred financial collaboration and free movement of labor.

Russian President Vladimir Putin and his Kazakh and Belarusian counterparts Nursultan Nazarbayev and Alexander Lukashenko have put their names to a historic agreement that officially establishes a Eurasian Economic Union. The document, signed in the Kazakh capital of Astana, provides for closer economic integration between the three nations, establishing free trade and unhindered financial cooperation, as well as free movement of labor.

The EAEU will start operating on January 1, 2015. Russian experts have welcomed the improved efficiency that the trade bloc will bring but are cautioning against haste in establishing a single energy market.

According to Vladimir Putin, this document takes the three countries to an absolutely new level of integration. "While fully preserving our state sovereignty, we ensure closer and better coordinated economic cooperation," he said.

As Alexander Knobel, head of the international trade laboratory at the Gaidar Institute, explained to Vzglyad, on the one hand, the EAEU agreement does not create anything new from the economic point of view. Everything that this document sets out has already been envisaged within the other associations uniting the three countries. Therefore, in the short term, the union will not dramatically boost trade between the three countries, especially since trade between them has been duty-free since 1992.

However, in Part Four of the agreement, the new union

creates a basis for finding further compromises and removing remaining restrictions. The three states undertake obligations to guarantee the free movement of goods, services, capitals, and labor. The members of the union will pursue a coordinated policy in the key sectors of the economy: energy, industrial production, agriculture, and transport.

Part Four of the document sets out further agreements on the commodities and financial markets and their timeframe, Knobel said. For example, by 2025, a common financial mega-regulator should be created and the signatories to the agreement should arrive at a common macroeconomic, antimonopoly, foreign currency, and financial policy. In 11 years' time the member states should have set up a common oil and gas market. By 2019, Russia, Kazakhstan and Belarus intend to create a common electricity market, while a single pharmaceutical market should start operating from January 1, 2016.

The creation of common markets in different sectors means not only free movement of goods inside the EAEU, but also the harmonization of rules and tariffs on the three countries' markets.

As regards electricity, at the moment Russia exports it to Belarus and Kazakhstan and imports it from Kazakhstan. "We have lower electricity tariffs for domestic manufacturers, so it is natural that the EAEU partners would like them too. This is in their interest," Knobel explained.

Kazakhstan and Belarus are also trying to get access to Russian oil and gas resources, although their interests here are different, deputy head of the National Energy Security Fund Alexei Grivach told Vzglyad.

Russian oil supplies to Belarus are exempt from duties, however Minsk has to pay an export duty to the Russian budget from sales of petroleum products (made from Russian oil) to Europe (to third parties outside the Customs Union).

Kazakhstan too would like to buy Russian oil at domestic Russian prices. It is also interested in using Russian infrastructure and exporting gas to Europe independently, said Grivach.

Hence Russia insisted on a lengthy period of transition towards a single energy market, so that it does not end up losing money and opportunities and getting a competitor on the European market to boot. Whereas in 11 years' time energy prices inside Russia may become closer to export prices, the European market may no longer be so significant for Gazprom, and Kazakhstan may no longer have superfluous gas to export to the EU.

The mutual benefit of these integration processes for Russia, Belarus, and Kazakhstan is already becoming evident. The three countries' economic ties have already expanded, the commercial framework is improving, the share of high-tech goods in the overall structure is rising, and the nations are becoming more competitive.

Over the past three years, trade inside the Customs Union has risen by nearly 50 percent, or by $23 billion (with 2013 taken into account, the figure reaches $66.2 billion). Taken together, Belarus and Kazakhstan have become Russia's third largest trading partner after the EU and China.

The EAEU also offers more opportunities for integration with third countries outside the union. As President Putin pointed out, the members of the new union have agreed to step up talks with Vietnam on creating a free trade zone, to strengthen cooperation with China, including in information exchange on goods and services, and to set up expert groups to develop preferential trade regimes with Israel and India.

First published in Russian at Vzglyad