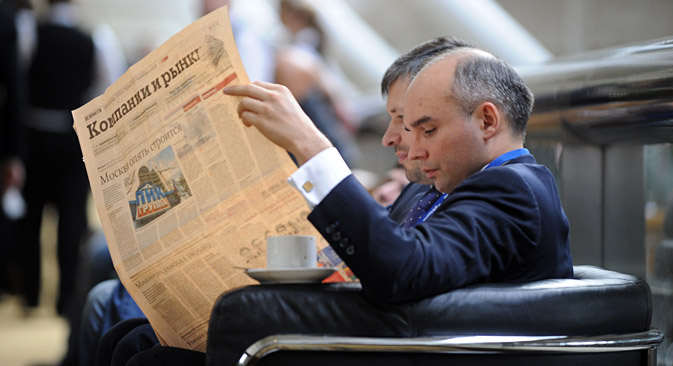 The partners have presented the new rating agency as "an agency outside politics." Source: ITAR-TASS

In an official statement, Russian Finance Minister Anton Siluanov has confirmed the formation of an international rating agency to compete with the “Big Three”. The new player is to be a joint venture between Russian, Chinese and U.S. agencies.

As RBTH has predicted, Russia is to establish a rating agency together with China's Dagong Global Credit Rating Co and the U.S. agency Egan-Jones Ratings, following an official announcement by Finance Minister Anton Siluanov. The new agency will become a competitor to "the Big Three" (Moody`s, Fitch, and Standard & Poor’s) and will be set up with input from prominent UK financier Richard Hainsworth.

New kid on the block

The new rating agency will be set up on the basis of the Universal Credit Rating Group, a joint venture between the Russian agency RusRating, the Chinese agency Dagong, and the U.S. agency Egan-Jones Rating. With this move, Russia has opted against joining the ARC Ratings international rating agency, which unites the five national rating agencies of Portugal, India, South Africa, Malaysia, and Brazil. According to an official statement by Russian Finance Minister Anton Siluanov, the new player will use the same instruments and criteria for assessing country and regional investment projects as used by the existing rating agencies.

In an earlier interview with RBTH, RusRating managing director Alexander Zaitsev said there was no direct link between the creation of a new rating agency and the Ukrainian crisis or the Russo-Chinese agreements. "The first signs indicating that the rating industry was in need of a revamp emerged long before the events in Ukraine, specifically at the height of the world financial crisis in 2008, when U.S. companies with top ratings from 'the big three' agencies began to go bust," he said.

From the outset, the partners have presented the new rating agency as "an agency outside politics." Analyst with the FINAM investment holding company Anton Soroko explains: "The influence of American rating agencies on investors' portfolios is too great, which allows them to manipulate public opinion through over- or underrating."

Soroko is convinced that, for the sake of more objectivity, the leaders need other international competitors, whose ratings would provide investors with an alternative view of an asset. Furthermore, looking forward, the consolidation of an agency like this with its U.S. counterparts could achieve the desired effect, i.e. create a united supranational group, free from political pressure, Soroko adds.

"Given the composition of its participants, the new agency is likely to gain the status of an 'apolitical' organization, which would arouse the interest of international investors in its work," says Vadim Vedernikov, deputy head of the analysis and risk management department at UFS IC. According to him, the fact that Russia in this project is represented by RusRating is probably due to its former head, UK financier Richard Hainsworth, and his earlier agreements on partnership with Chinese and U.S. colleagues.

In 1996, Richard Hainsworth became head of the Russian branch of Thomson Financial BankWatch, a major international bank rating agency, which was later acquired by Fitch. In 2001, the same year that RusRating agency was set up, Hainsworth, with support from the U.S. banking division Citibank, founded rating company Global Rating International Ltd. Later Hainsworth set up similar agencies in other former Soviet Union countries, including KzRating, founded in Kazakhstan in 2006, and AmRating in Armenia. All the agencies are national rating agencies and form part of the GlobalRating group.

According to RBTH sources, Richard Hainsworth is currently one of the leading experts on credit risks in Russia. In 2004, he initiated the establishment of an association of certified financial analysts in Russia (CFA Russia) and was elected its first president. However, in late 2013, Hainsworth left RusRating in a move which has been interpreted by market players as linked to change of ownership at the agency.

According to experts, the new owner of RusRating is the Chinese rating agency Dagong Global Credit Rating. It was at the end of 2013 that a joint venture was set up on the basis of the Chinese and the Russian agencies together with Egan-Jones Ratings from the U.S. - new international agency Universal Credit Rating Group.

However, according to the influential Russian daily Kommersant, the main beneficiary of RusRating is not Dagong, but Russian banker and construction tycoon Mikhail Shishkhanov, the nephew of Russneft oil company owner Mikhail Gutseriyev (worth $3.3 billion, according to Forbes). The publication notes that it was the owners' clout that ensured the necessary political support for the new rating agency project.

However, experts point out, in order to compete with the “Big Three", the new agency will have to spend a lot of time establishing interaction with international partners. "The main strength of international rating agencies is reputation, which takes years to build. However, both Dagong Global and RusRating were set up relatively recently, so it is quite logical that not all foreign investors are ready to trust these agencies' ratings," says Investcafe analyst Mikhail Kuzmin. However, he adds, if Sino-Russian cooperation expands further, then at first the new agency's ratings could be used in joint Russian-Chinese projects.