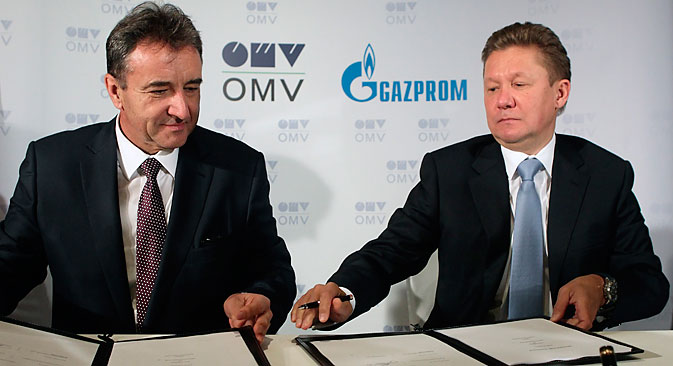 The Russian gas monopoly Gazprom has signed an agreement with the Austrian company OMV to handle the construction of the Austrian section of the controversial South Stream gas pipeline. However, Russian analysts interviewed by RBTH view the deal as political in nature and are skeptical that the deal will have any concrete effect on the fate of the project.

The Gazprom board chairman Alexei Miller and the general director of the Austrian gas and oil company OMV, Gerhard Roiss, have taken a key step toward finalizing the Austrian section of the contentious South Stream gas pipeline linking Russia and Central Europe via the Black Sea.

The two nations have signed an agreement on the creation of the company South Stream Austria, in which both companies will have an equal share. According to this document, the Austrian segment will extend from the border of Hungary to its final destination in Baumgarten, Austria, and will have a throughput capacity of 30-32 billion cubic meters of gas per year. The total cost of the segment will be $273 million and both sides will be investing in it on an equal basis.

“Joint ventures of this type have also been created with national gas and oil companies in other countries, on whose territory onshore segments of the pipe are planned to be constructed: Bulgaria, Hungary, Greece, Serbia, Croatia, and Slovenia,” explains Grigory Birg, co-director of Investcafe’s analytical department.

The first supplies of gas through the pipeline are due to begin in late 2015 but the artery will enter full capacity – 63 billion cubic meters per year – in 2018. The gas pipeline will run along the Black Sea seabed to Bulgaria, and further on through Serbia, Hungary, and Slovenia to northeast Italy.

The total budget of the project is estimated at $21.8 billion, 13.6 billion of which will be allocated for the undersea segment. At the same time Russia only holds 50 percent of the share in the marine part of the South Stream project; 20 percent belongs to Italian oil firm Eni and 15 percent each to the German company Wintershall Holding and France’s EDF.

The project is important for Gazprom since it makes it possible to export Russian gas to Europe while bypassing Ukrainian territory; the Ukrainian company Naftogaz has not been paying for gas supplies since early 2014.

While signing the agreement with Gazprom, the head of the Austrian company also showed support for South Stream, stating that it is not worth impeding the realization of the project and that, on the contrary, negotiations should be accelerated. Under U.S. and EU pressure, Bulgaria’s representatives have declined to work on the project and representatives from Serbia subsequently made a corresponding announcement.

Earlier, representatives of the European Commission announced that South Stream contradicts the Third Energy Package, which requires the separation of gas companies’ sale operations from their distribution networks.

“One company cannot simultaneously be both supplier to the European countries and owner of the self-built gas pipelines through which the commodity will reach customers,” explains Grigory Birg. That means Gazprom will have to provide access to third party gas suppliers in order to comply with the Third Energy Package regulations – and this is a real threat.

Quite recently, the Russian company had to sell its shares in Lietuvos Dujos and Amber Grid, which handle the supply and distribution of gas to Lithuania’s domestic market, in line with Lithuanian law and the requirements of the Third Energy Package regulations in conditions where Gazprom is the main supplier of gas to a country.

According to Mikhail Korchemkin, general director of the firm East European Gas Analysis, Austria’s support does not solve the South Stream problem. “The project must be brought into compliance with the European Union laws that the Russian side is currently contesting in the WTO,” Korchemkin told RBTH.

“The emergence of an Austrian partner has not changed anything,” he added. Moreover, according to him, OMV is interested in Azerbaijani gas having access to South Stream, since competition between suppliers is always in the interest of the customer, which in this case is the European Union.

Commentators are of the opinion that the agreement between the Russians and Austrians is most likely political. Dmitry Baranov, a leading expert at Finam Management, argues that Austria’s involvement in the South Stream project indicates that despite the significant pressure, “European countries consider South Stream an important and necessary project” that “truly diversifies the gas supply to the continent and ensures their economies a guaranteed supply of invaluable raw materials and energy resources.”

Baranov says that if Europe really wants to diversify the gas supply to the continent, then it would be logical and justifiable to keep Russia in its list of suppliers so that it would never fall into dependence on other states and can always maintain the possibility of maneuver depending on how the political or economic situation in the world changes.

As Vladimir Putin stated during his meeting with his Austrian colleague, the U.S. – which has already become the largest producer of gas in the world thanks to the extraction of shale gas – could become such an alternative supplier for Europe. Indeed, the president of the US, Barack Obama, has acknowledged that American companies are ready to supply Europe with gas; however the price will most likely be much higher than that for gas supplied by Gazprom due to shipping costs.