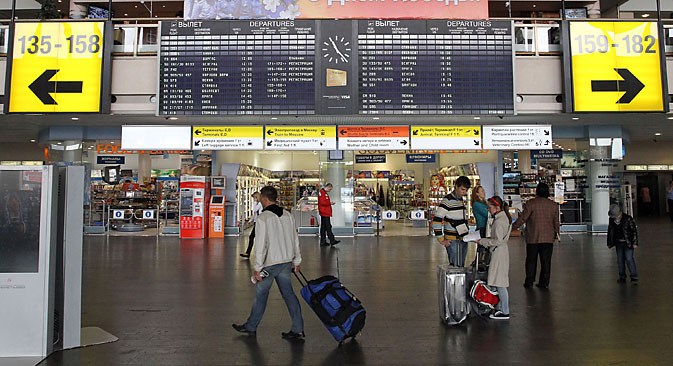 Tourist operators in Russia have expressed alarm at a substantial drop in the number of foreign visitors coming to the country in 2014. Key figures in the tourist industry speculate that the fall in tourist numbers may be a result of the Ukrainian crisis, but point out that inbound tourism from Asia is on the rise.

Since the start of 2014, the flow of tourists coming to Russia from key European countries has dropped by 20-25 percent - and by as much as 30-40 percent for visitors from Canada, the U.S. and Japan, according to Sergei Voytovich, managing director of tourist company Svoy TT. He told RBTH he was convinced that the drop can be attributed both to political reasons (some tourists have been frightened off by the situation in Ukraine) and to visa difficulties.

Other market experts confirm that there are negative trends in action. "Indeed, there is currently a considerable reduction in interest in Russia among foreign tourists, although it would be more appropriate to sum up the real outcomes at the end of the year," said Moisey Furshchik, managing partner with FOK, a company specializing in regional tourism development programs.

According to him, tourists' choices are very strongly influenced by the overall attitude to a particular country. In some countries, the events in Ukraine have resulted in a surge in anti-Russian feelings. Furshchik pointed out that for the majority of people, this is not expressed in any specific fears, such as concerns for one's personal safety, fear that transport links may be disrupted or foreign currency banned.

What foreign tourists spend in Russia

"It is just a general negative perception, formed by politicians and the media. In these circumstances, foreigners do not even want to study tour offers from Russia since there are so many other interesting places in the world where one could travel to right now. As a result, visits to our country are put off ‘until later'," he said.

However, when this "later" comes, it may bring an increase in interest in Russia. Furshchik is convinced that if the international political situation stabilizes and Russia's image abroad is restored, tour operators should try and make the most of this delayed demand.

However, Darya Smirnova, director for Europe, the Middle East and Africa (EMEA) at the 360 Experience company, is more optimistic in her assessment of Russia's popularity as a tourist destination for visitors from abroad. According to her, the overall number of foreign tourists into Russia has not only not dropped but has in fact increased.

What has changed is the "profile" of tourists visiting Russia. Europeans are now more inclined to choose other destinations, whereas demand from Asia has grown. This observation is confirmed by official statistics from the Russian Federal Tourism Agency (Rosturism).

For example, in the first quarter of 2014, the number of tourists from South Korea has increased by 144 percent compared with last year, mainly due to changes in visa regulations between the two countries.

At the same time, Smirnova confirmed that there had been a reduction in the number of Spanish tourists by, in her estimate, 20 percent. "Possible reasons for this could be the overall economic situation and changing preferences among tourists: this year's clear favorites are the Caribbean and the U.S.," she explained.

According to the global trend, tourism is growing by 4-6 percent every year. In the first three months of this year, Russia generally followed this trend, albeit at the lower end of the range.

"Lack of growth and development in the Russian tourist sector is a result of one single factor: the policy towards maintaining the visa regime and supporting monopoly visa centers," Voytovich said, adding that Russia still remained a spectator when it came to global tourism. At present, foreign tourists mostly visit only Moscow and St. Petersburg, with all other destinations being no more than "a statistical error,” he added.

Vladislav Shulayev, co-chairman of the branding and regional promotion committee at the Russian Public Relations Association, told RBTH that difficulties with developing incoming tourism primarily result from the lack of a systemic presentation of Russia's opportunities outside the country.

For the past 20 years, the regions' communication infrastructure has been focusing on domestic audiences. Russia’s regions have not yet become well versed in working with foreign audiences. This affects not only tourism, but also business and investment.

All foreign experts that he has worked with say that people abroad have no idea of what Russia has to offer. The Russian Federal Tourism Agency has already announced plans to set up branches abroad in order to promote tourism opportunities inside Russia.