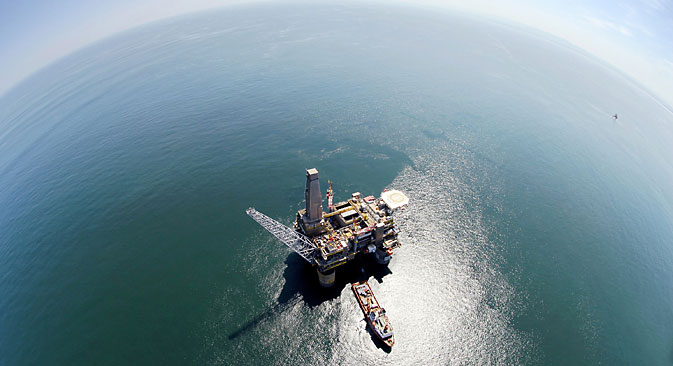 Russia has launched the new Berkut (“Golden Eagle”) platform for the Sakhalin-1 project on the Arkutun-Dagi oilfield in the Russian Far East.

The press office of co-financier Rosneft — the largest oil company in the world — reported the superlative dimensions of the installation: The platform is 105 meters in length, 60 meters in width, and 144 meters in height, on a par with the top of a 50-story building.

Rosneft's press office also noted that the process of installing and transporting the platform broke several world records for the industry. Together with its foundation, the overall weight of the platform is greater than 200,000 tons, making it the largest platform of its type in the world.

Berkut will soon receive its firefighting equipment and living quarters module, and the start of drilling is planned for fall 2013, after the completion of essential testing. The development of this oilfield will add up to 4.5 million tons of oil to the yearly yield of the Sakhalin-1 project.

“The opening of this oil platform marks a significant event, as it is the largest platform in Russia and one of the most technologically advanced drilling platforms in the world. The Russian-made drilling rig installed inside has no rivals in terms of power and working capacity,” says UFS IC macroeconomic analyst Vasily Ukharsky.

According to Ukharsky, the platform's structure provides for round-the-clock work in severe sub-Arctic conditions. Particularly noteworthy is Berkut’s seismic protection system, whose ability to withstand a 9.0 earthquake without the interruption of operations is unprecedented in the global oil industry. The platform likewise need not fear low temperatures, given that it is rated to work at -44 degrees Celsius. Berkut is designed to withstand an 18-meter-high tsunami and the pressure of two meters of ice.

President Vladimir Putin supervised the platform's opening, having earlier given the go-ahead to Gazprom's Prirazlomnaya project for the first Russian oil platform on the Arctic shelf. Berkut is now the second large-scale installation on the shelf.

“Thanks to projects like Berkut, we can now utilize richer — but difficult-to-access — oilfields, open up new production, and overall strengthen the socioeconomic development of our country's most important region: the Far East,” the Russian president said via a video conference.

A statement of intent

According to Dmitry Baranov, lead expert at Finam Management, the platform's installation is clear evidence that Russia continues to expand its presence on the Arctic shelf.

“The platform's construction and coming start of operations will increase the speed of the Far East's overall socioeconomic development, as it will see the development of considerable concomitant infrastructure,” Baranov adds.

As the first large-scale project in Russia to work under a production sharing agreement, the Sakhalin-1project had no problems attracting several major international companies. Thirty percent of the endeavor belongs to American company ExxonMobil, 30 percent is owned by Japan's SODECO, and 20 percent each by Rosneft and India's ONGC.

The Sakhalin-1 project has already produced 64 million tons of oil, although output will gradually decrease. In 2014, yield may fall by 6 percent overall to 6.6 million tons less than in 2013. However, exploitation of the Arkutun-Dagi field will help remedy the situation. Rosneft predicts that Sakhalin-1 will increase its annual output to 10 million tonnes by 2018.