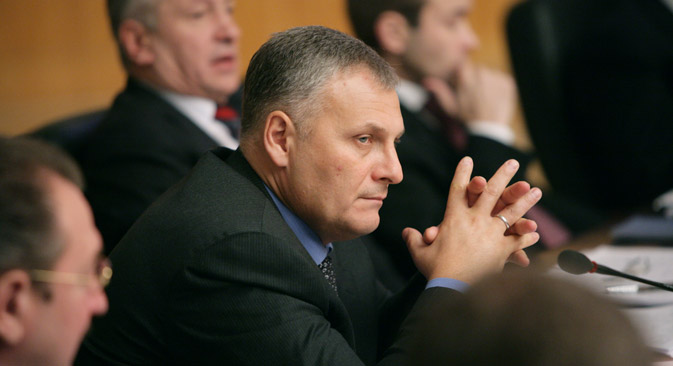 RBTH speaks with Governor of the Sakhalin Region Alexander Khoroshavin about the current state of the Sakhalin-1 project, a joint U.S.-Russian initiative to build a liquefied natural gas plant in the Russian Far East.

The imposition of sanctions against Russia by the United States has put joint Russo-American projects at risk, including cooperation between U.S. company ExxonMobil and Russian oil giant Rosneft on the construction of a plant for the liquefaction of natural gas at the Prigorodnoye Production Complex on the island of Sakhalin in the Russian Far East. This gas is to be exported to Asian markets: China, Japan and India. RBTH speaks with Governor of the Sakhalin Region Alexander Khoroshavin about the current state of the project.

RBTH: How has the fate of the project to liquefy gas on Sakhalin changed after U.S. sanctions, especially since one of the project's investors is the American firm ExxonMobil? There are rumors that the Americans are thinking of abandoning the project. Would the region be able to support the project in this case; financially, that is?

Moreover, this project is one of the most interesting and effective projects in the company's portfolio. The company is increasing its investments in the project and does not intend to terminate its activity. Recently, I met ExxonMobil CEO Rex Tillerson and I can competently declare that for the moment there is no talk of abandoning the project.

RBTH: How powerful is the first LNG plant? Is it already functioning according to projected capacity?

AK: The plant's productivity at Prigorodnoye is 9.6 million tons of LNG per year. However, that is not the limit. For example, last year the plant produced 11 million tons. With the construction and launch of the plant's third branch, a further annual capacity of 5 million tons will be added.

The second stage is the joint ExxonMobil and Rosneft project, which will depend on resources from the Sakhalin-1 project, as well as Rosneft's resources on the island. The plant's first branch will process approximately 5 million tons of LNG, but eventually production will reach 10 million. The total amount of investments in the plant will be about $15 million.

Currently, the project is in the so-called "pre-fit" stage and two locations are being considered for the positioning of the plant. In July, the second stage of the project will begin, one in which the location will be determined and the companies responsible for the technical and economic realization of the project will be chosen.

RBTH: How do the LNG projects influence the regional economy?

AK: These types of projects have a big multiplicative effect, since in order for the LNG plant to work, we need to construct an industrial infrastructure, a port, LNG carriers, pipelines. These jobs require the participation of a large number of workers. They need to be housed and given the necessities. Consequently, small businesses get a chance to develop, there is an increase in fiscal return, there is development in the economy and in social areas, and the standard of living for the inhabitants of Sakhalin and the [neighboring] Kuril Islands increases. There are figures that can prove this. The Sakhalin Region currently has a population of 500,000. For every 10,000 vacancies there are 1,500 unemployed.

RBTH: Japanese MPs recently gave their support to the construction of a gas transportation system from Sakhalin to Tokyo. How realistic is this project and can it be considered a competitor for the project developing LNG in the region?

AK: This is a Japanese initiative to build a gas pipeline from Sakhalin to Hokkaido. However, we have not examined it yet. The project requires a $6 billion investment and we must not forget that a gas pipeline is always dependent on the buyer, whereas LNG is not.

What are currently the main sources of income on Sakhalin? What role does the export of hydrocarbon play?

AK: The oil and gas industry plays a leading role in the Sakhalin Region, and its development is one of the main factors that determine the region's economic growth. I would say that, on the whole, among the key sectors of development is the fuel and energy sector, including the oil and gas industry, the coal industry and the electricity supply and fishing industries. These are the two driving forces in the region's development. Furthermore, the fuel and energy sector remains the main export business, with a specific gravity in supplies leaving the Sakhalin Region in 2013 of 94.6 percent (94.5 percent in 2012).